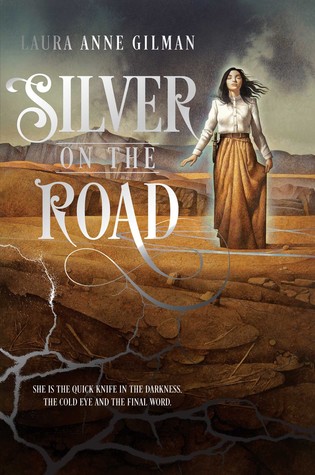 A heroic fantasy by an award-winning author about a young woman who is trained in the art of the sinister hand of magic, but at what price?

Isobelle, upon her sixteenth birthday, makes the choice to work for the devil in his territory west of the Mississippi. But this is not the devil you know. This is a being who deals fairly with immense—but not unlimited—power, who offers opportunities to people who want to make a deal, and they always get what they deserve. But his land is a wild west that needs a human touch, and that’s where Izzy comes in. Inadvertently trained by him to see the clues in and manipulations of human desire, Izzy is raised to be his left hand and travel circuit through the territory. As we all know, where there is magic there is chaos…and death.

Silver on the Road was one of my most anticipated reads this year. When it arrived, I was so excited I started it right away. One thing I can say, and probably should, in this first paragraph is that it will absolutely be on my Top 10 of 2015 list at the end of this year. It not only fulfilled all my expectations, but exceeded them.

I love weird west books, and I don’t really think there are enough of them. Silver on the Road isn’t just a realistic and believable rendering of the wide open West, but it’s mysterious, full of layers and plenty of mystery. Gilman does a fantastic job of showing just how sprawling the West is, and how full of its own unique mystery and culture it is. And she develops plenty of her own as well, from animals that occasionally speak and hold their own wisdom, to the power of crossroads and running water, to the plight of the natives and the settlers.

And then there’s the Devil himself, the man who is older than memory, and somehow manages to keep the West and all its wildness under his control. His magic is powerful, and his name is enough to strike fear and respect in just about anyone. While he doesn’t get much center stage time in the novel, he really shouldn’t. The Devil works best how Gilman leaves him, a shadowy character in the sidelines whose power and presence you feel in just about everything, and whose lack of definition and mystery makes him all the more compelling and believable.

Bartering and trade is the currency and blood of Gilman’s well crafted world. You can’t get something for nothing, and I often found it fascinating how Gilman uses that as a powerful tool throughout her novel. The give and take fills the book with a sort of tense atmosphere. If someone wants something, then they need to be able to give something of equal worth. Contracts are signed in blood, and the Devil always takes his due. It doesn’t take long to see that the trepidation, fear, and respect surrounding the Devil is well earned if for the hard bargains he strikes than for no other reason.

In a lot of ways this book is a coming of age tale in a world that demands a lot from the people who live in it. Isobel is a character that is easy to love. She starts out full of an addicting sort of energy and innocence as she contemplates what to do with the rest of her life. She throws herself into a bargain with the Devil that she doesn’t really understand, and demands a lot from her, not the least of which is leaving the only home she’s ever really known with a perfect stranger. She has to learn the road, and explore the wide open West. In the process she uncovers vast darkness, a land being reformed in some ways, and the fact that her contract with the Devil makes her the person who needs to take care of it. Her innocence quickly gets stripped from her, and the land she travels seems to reshape her as she goes.

In a lot of ways, this book is an intricate tug of war. Isobel has protection and power from the Devil through her contract with him, but she does get a bit of bitterness and anger that develops as things progress. She gains a lot from her mysterious benefactor, but she lost some control and she doesn’t realize that until its too late. There is emotional backlash to all of that, and slowly you realize that Isobel isn’t unique with that emotion. It’s felt by just about everyone who has ever had dealings with the mysterious man who keeps the West under his thumb. You give the Devil his due, and you feel that sting by realizing that you are giving just as much as you get, as well as a dollop of control over your own life in the process.

Things get going at a decent clip. Much of the first half of the novel is Izzy learning herself, and life on the road. She has a lot to absorb, and most of this part of the novel is lessons that she’s learning. It’s not the least bit boring. Gilman uses a lot of this portion of the book to not only educate and develop Izzy, but show readers the world she’s created. Slowly things unfold. Not everything the book has to offer is shown at once. Silver on the Road has to flirt with you a bit first, and slowly reveal itself as things get going.

Things take a darker turn toward the second half of the book, and all that learning and development in the first half of the novel is put to good use in the second, where Gilman really flexes her creative muscle. This part of the book is full of tension, and plenty of mystery while the characters and the readers are discovering what’s going on at the same time. The undefined aspects of the book slowly gain definition, and in the process Izzy and company gain a lot of depth and fleshing out.

By the time it’s all said and done, readers will have gone on a whirlwind adventure and coming of age in a landscape that is sprawling, mysterious, and absolutely one of a kind. The writing is smooth, the characters are likeable, and the mystery is compelling. This is one of those novels that isn’t just fun, but it’s so one of a kind, it’s also hard to forget or put down. I’ve read some of Gilman’s books before, and she’s always been an author that has impressed the hell out of me, but Silver on the Road shows her at the top of her game. This book is everything I wanted it to be plus more. And I’m just left here wanting more.

Damn it, Laura Anne Gilman, I want more and I don’t want to wait!