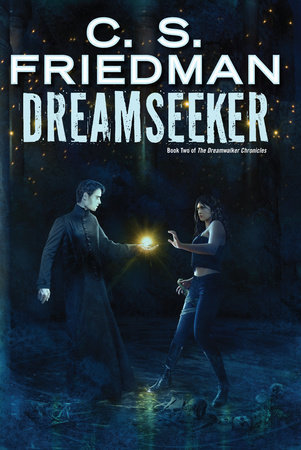 When Jessica Drake learned that her DNA didn’t match that of her parents, she had no idea that the search for her heritage would put her family’s lives in danger, or force her to cross into another world. In an alternate Earth dominated by individuals with unnatural powers called Gifts, Jessica learned that there was a curse within her blood, one so feared that all who possessed it were destroyed on sight. For she was a Dreamwalker, and the same dark Gift that would allow her to enter the dreams of others would eventually destroy her mind and spread insanity to all those around her.

Now she is back with her family, but there is no peace to be found. Her childhood home has been destroyed, her mother’s mind is irreparably damaged, and the Gift of the Dreamwalkers is beginning to manifest in her in terrifying ways.

When a stranger invades her dreams and creatures from her nightmares threaten to cross into the waking universe, Jessica knows she must return to the alternate Earth where she was born and seek allies… even if doing so means she must bargain with those she fears the most.

I have said it before, and I’ll say it again, I’m a huge fan of C.S. Friedman. Her foray into young adult seems to be hit or miss with most readers. It’s far different from her usual dark fantasy, antihero fare. That being said, I’m not a huge fan of young adult books, but I look forward to each new book in this series, and I’m thrilled that the publisher sends them to me.

There’s a reason for that. Friedman’s young adult is a bit more mature in feel and tone than so many young adult books I’ve read. That is heightened a bit in Dreamseeker, where our protagonist Jessica Drake is primarily driven to save her mother, and protect those she loves. Furthermore, her mother’s condition is a direct side effect of the events that took place in the first book, and due to that, Jessica has to grapple with some pretty hefty, pretty adult emotions and decisions and she grows quite a bit as a result.

Most of the world building was done in the first book, and Friedman does a great job at expanding upon the foundation she put in place in Dreamweaver. In a lot of ways this was beneficial. There were no infodumps, no moments of extensive teaching and learning. There were still moments where the characters had to learn and develop, but I never felt like it weighed down the plot. In a lot of ways, this book felt less uptight and strained, and a lot easier to fall into. Instead of the focus on development, Friedman does what she does best – she added a hell of a lot of depth and detail, not the least of which was adding some necessary complexity to the magic system.

Dreamseeker focuses a lot on relationships, the powerful force of friendship and the kinship of family – the family you are born into and the family you create. In the course of two books, Jessica and her crew had to grow and develop a lot, and in many ways Friedman pushes all of her characters to their limit in this book. It was delightful to watch them bend and strain, to grown in unexpected ways and fill the world(s) that Friedman has created for them.

There are quite a few unexpected developments that take place, and some more expected and predictable plot points as well. Friedman managed to give some secondary characters in the previous book some well-deserved limelight, while gracefully introducing new characters that quickly become interesting or promise to become important further in the story. This also created a fantastic depth to a lot of the organizations, situations, world building and so much more. Actions have consequences, many more far reaching than I typically see in a young adult novel.

Really, there was a lot here that was done so well.

I had a hard time believing some of it. For example, I never really believed that any adult would buy the reasons that Jessica and crew gave their parents/family members about why they had disappeared – and accept said reason without really investigating at all. That felt far too convenient to me. Some of the decisions that were made were shortsighted, and some mistakes too obviously pushed the plot forward.

Those are small complaints, though. This is a strong novel that expanded on what Friedman built in Dreamweaver. Her foray into the young adult arena is a success. This is a fun, addictive series that shows off many of the reasons why C.S. Friedman has been one of my favorite authors for many years.