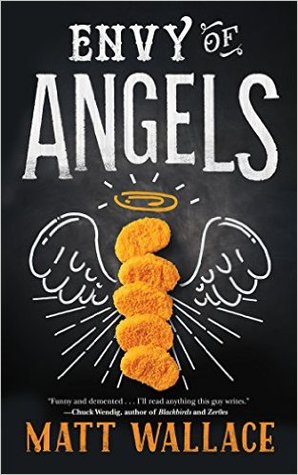 In New York, eating out can be hell.

Everyone loves a well-catered event, and the supernatural community is no different, but where do demons go to satisfy their culinary cravings?

Welcome to Sin du Jour – where devils on horseback are the clients, not the dish.

Envy of Angels is a book that attracted my attention right away. It’s an interesting premise, an urban fantasy novella that almost entirely takes place behind the scenes at a restaurant in New York City. Not just any restaurant, but a restaurant that caters to the non humans in the city.

The thing that really got me was the fact that no one has thought about writing something like this before, and the sheer genius of his execution is staggering. It’s such a simple concept, but because no one has done it before, it is unique despite its simplicity. Restaurants are something I know little about, besides the chaos that must take place in the kitchens and behind the scenes – Wallace ups the ante, and throws in a ton of extra stuff just to make an already intense setting, that much more intense.

The two main protagonists, Lena and Darren, are regular down-on-their-luck humans who are thrown into the position of subbing for a catering gig through desperate want of a job. They quickly end up over their heads in the other side of New York that they never knew existed. It’s interesting to see them navigate this new setting, and a lot of fun to watch them grow and adjust while they keep treading water in this fast paced, rather intense setting.

The setting is rather narrow in scope, mostly taking place in this one restaurant with a few capers that happen outside, but through the people that are introduced, and the various foods and stories told, readers quickly and rather deliberately learn more about the wider world in which this restaurant is set. There are gangs, and tensions between gangs, and get-togethers to celebrate treaties, and agreements, and to stave off war. Wars and fights that most people never know are happening.

And somehow, despite all the tension and the obviously important place Sin du Jour has in this whole thing, Wallace makes it all funny and lighthearted. I soon realized that his humor was part of his genius. He has this uncanny ability to take a world that could be so intense, and a situation that, just reading about it, gives me palpations, and managed to make me laugh through the whole thing.

Envy of Angels is a sort of rabbit hole. Once you start down it, it’ll be almost impossible for you to stop. Things get weirder and weirder, and more addicting as they go. It’s hard to not quickly find yourself morbidly curious about what is going to happen next. When a morally questionable item is requested to be served at one of these important banquets, a sort of huge heist is introduced into things, and everything just gets more intense, and more strange, and more delightful.

The end result isn’t quite a heist, and it isn’t quite an urban fantasy or noir novel. It’s… whatever it is. There’s a delight in reading a book and not knowing how to classify it. It’s quite thrilling to be this surprised by a book. The truth is, Envy of Angels is one huge story packed into a tight little novella. It’s delicious, spiced just right, with the perfect amount of unique elements to make this story sing. Envy of Angels was a treat. I am willing to read anything that Wallace writes.

P.S. I should note that there were a few copyediting errors in this book that were distracting. Maybe I’m just a stickler on these things.