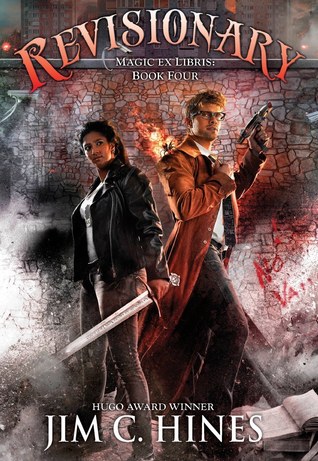 When Isaac Vainio helped to reveal magic to the world, he dreamed of a new millennium of magical prosperity. One year later, things aren’t going quite as he’d hoped. A newly-formed magical organization wants open war with the mundane world. Isaac’s own government is incarcerating “potential supernatural enemies” in prisons and internment camps.

Surrounded by betrayal and political intrigue, Isaac and a ragtag group of allies must evade pursuit both magical and mundane, expose a conspiracy by some of the most powerful people in the world, and find a path to a better future. But the key to victory may lie with Isaac himself, as he struggles to incorporate everything he’s learned into a new, more powerful form of libriomancy.

I am intensely sad that this series is over. I’ve loved every single book in it, and knowing there won’t be another one is one of the biggest injustices in the genre right now. WE ALL NEED TO PRESSURE JIM C. HINES INTO WRITING MORE BOOKS SET IN THIS WORLD.

Look, I even shouted that. Hang on, I’ll put it in bold.

WE ALL NEED TO PRESSURE JIM C. HINES INTO WRITING MORE BOOKS SET IN THIS WORLD.

There. Now I mean business. Get behind me, internets. Let us make this happen.

Revisionary is the last book in the Magic Ex Libris series, and it’s a lot different than the previous books. First of all, there is a sort of peace between the characters that hasn’t really existed before. Everyone’s relationship has been figured out. They are all as pleased with the situation as they can be. It’s quite wonderful to see how a love triangle doesn’t have to be some awkward thing, but a sort of nice, warm relationship(s) that can provide balance as well as the frustrating emotions that are often highlighted.

Secondly, the world is in an uproar. People know about the magic, and it’s changing the game in big, big ways. As you’d expect, some people embrace it, while others are scared of it, and others still want to use it for their own aims. There is governmental issues, and there are personal issues, and there are some interesting tug-of-wars that happen between both. For example, when Isaac can use magic to help cure or heal people, but he isn’t allowed to due to government regulations. He often finds himself in bad situations, hated by the people who he can cure, but also can’t, and left feeling helpless and overwhelmed by the emotional fallout.

He’s also the center of a lot of attention, and that has changed him a bit. It has also changed all of his relationships. His relationship to Lena is long distance, as he is based in Las Vegas. His relationship to his family is strained (but in a lot of ways it always was). His relationship to the public is… interesting (see previous paragraph). He seems to know himself better than he has in previous books, but how he fits in with the people he loves so much has absolutely changed, and the fact that he is recognized by many, and his magic is so politically and socially powerful often makes situations awkward.

So yes, things have changed. Isaac isn’t hiding anymore, and that puts a whole new spin on the game.

This book is quite political, and it has to be to deal with this whole new situation that Isaac finds himself in. There is a lot of betrayal, and a ton of plot twists. Magic itself seems to be evolving as much as the characters are, and it’s neat to see just how all of that impacts everything else. It’s quite a mixed bag that Hines throws at his readers, but it’s easy to sort it all out, sit back, and enjoy the ride.

Ultimately this is a book that shows how decisions made in previous books play out in a grand way. Isaac has grown up to be the man he was meant to be. He has to face a lot of political schemes, and plenty of painful betrayal. The world is struggling with the knowledge that there is magic, and it’s almost ripping itself apart as people panic in varying degrees. Lives are changed, and the struggle is eerily parallel to a lot of things that are currently happening in our own world. The ending is final, and surprising, and perfect.

Revisionary was probably my favorite book in the series. A lot of things that have been slowly building are played out, and I can really tell that Hines put a lot of thought, a lot of careful planning, and a lot of love into crafting this perfect ending for his readers. This entire series is one of transformation, but Revisionary is really where readers see just what kind of butterfly has been developing all this time.

And damn, folks, it is beautiful.