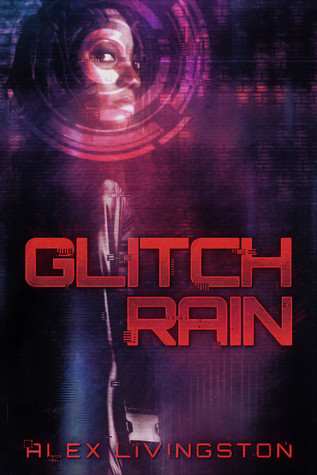 Akuba is a low-level hacker for the city’s wealthy, making just enough to keep her bills paid and her booze flowing. Her job is to scrub the social feeds for faces who don’t want to be seen, hanging out at parties to guard the elite from errant social media statuses and incriminating photo posts. Not the most glamorous job, but she’s getting by. When an old debt comes due early suddenly she is the one who needs to keep her face out of the drones’ omnipresent eyes. Thrown into the high-stakes world of international cybercrime, Akuba will have to have to outmaneuver unlimited surveillance, high-tech con artists, and an international hacker kingpin if she wants to survive. Every identity has a price in Glitch Rain.

Glitch Rain was the first book by Apex Book Company that I’ve read, and it was right up my alley. I have to admit that I absolutely love cyberpunk. I also love diversity and strong female protagonists with fluid morals. This book had it all.

Glitch Rain features Akuba, a woman who works as a hacker. She goes from party to party and keeps the faces of important people who pay her out of the media spotlight. It’s an interesting job, and quite unique to the advanced technological age which this book takes place in.

The technology is quite interesting. Basically most of it is obviously based on our own technology – social media is everywhere, and it’s hugely powerful. Most crime seems to take place in the virtual world. There are huge rings of criminals who use credit cards to steal the benefits off of them (like airline miles, for example). Drones are all over, circling cities and taking pictures of just about everyone. Drones are from private companies, governmental organizations, etc. Big Brother is everywhere, and everyone is seen.

Anonymous acts do happen, as exampled by a man in gray who approaches Akuba at a club and gives her the news that her (considerable) debt is being called in and she has a week to figure out where the money is coming from and how she’s going to get it. Then he disappears into the ether, which should be impossible in an age when everything is seen, but he does.

The world where this takes place is really interesting, not just for the technology, but because it takes place in an African country, and that’s just so rare. Other than Nnedi Okorafor, I haven’t really read any SciFi that takes place in a setting that is this wonderfully diverse, and so incredibly vibrant due to that.

Once Akuba’s debt is called in, things really get going pretty quickly. A lot of details remain kind of nebulous. For example, her debt is talked about, and it gets hinted at and poked at enough that readers can deduct how exactly she came into this debt, but you never explicitly learn what it is about. Actually, the nebulous details really worked for me because it allowed me to focus on the important aspects of the book, which is obviously Akuba working through this criminal world in cyberspace to get her debt paid off in time.

Akuba is a great character because she’s so flawed. She’s terrible with money, and generally doesn’t give much of a crap about anyone but herself. She does what she needs to do, and doesn’t really feel any compunctions about it. Though when she has to get a little tighter with the criminal aspect of the cyber world, she starts getting uncomfortable. Her emotions really bleed through the novel, from her tension and her anxiety, to her worry and fear and it’s surprisingly addicting.

However, I had a hard time connecting with her on occasion. I’m not even sure why, but I did feel that there was a divide between the two of us and I never really got into her head the way I wanted to. I didn’t feel personally invested in her story. It was interesting, but it didn’t suck me in the way I wanted it to. Looking at it now, I realize it’s probably because I’d be having panic attacks during most of what Akuba goes through, and she remains so glacially calm the whole time that it caused some sort of cognative dissonance on my part. However, that’s who she is, calm in the face of chaos, and I can appreciate that.

This book is 140 pages long, but there is so much in it, and for cyberpunk world development, it’s absolutely top notch with no detail overlooked or too small to be thought of. That’s what really stand out to me. This is a short book, but it is so incredibly well done.

Despite that, this book was fantastic. It was delightfully diverse, and every detail was thought out. The characters were real and their emotion absolutely leapt off the page. Glitch Rain is a great cyberpunk novel that fans of that sort of thing should really pay attention to. It’s 140 pages long, and you’ll be surprised at how fast it goes by. This is one of those books that is almost impossible to put down.