The Devil You Know – K.J. Parker 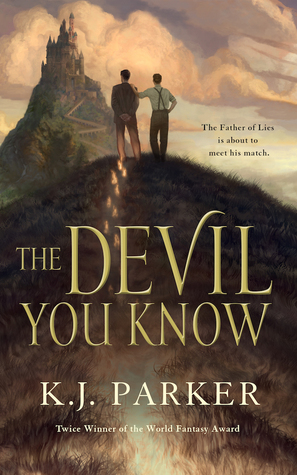 The greatest philosopher of all time is offering to sell his soul to the Devil. All he wants is twenty more years to complete his life’s work. After that, he really doesn’t care.

But the assistant demon assigned to the case has his suspicions, because the philosopher is Saloninus–the greatest philosopher, yes, but also the greatest liar, trickster and cheat the world has yet known; the sort of man even the Father of Lies can’t trust.

He’s almost certainly up to something; but what?

K.J. Parker is one of my favorite, if not my absolute favorite, authors. I think by this point the man would probably have to murder puppies in front of me for me to think less of him or his work.

So, just from the get-go, you guys need to know that I am HUGELY biased in regards to everything this author writes.

The Devil You Know was right up my alley. A conversation between a philosopher known for his atheistic thoughts (woo!), and a minion of hell (double woo!). The philosopher Salonius is entering his twilight years, and strikes up a bargain with the devil to give him twenty more years of life, complete with youth and health. In exchange, he promises to give his soul to the devil once he dies.

It soon becomes obvious (due to the fact that Salonius is known for shenanigans) that there is a larger con at play, and our devil is trying to figure out Salonius’s angle while Salonius is obviously enjoying himself capering about and deceiving just about everyone he comes in contact with.

So at this point you have a typical K.J. Parker novella. Everyone has an angle, and no one knows what the hell that angle is and I love it. I. LOVE. IT. However, The Devil You Know stands apart for some reasons. This book doesn’t have much worldbuilding. In fact, in contrast with some of Parker’s other works, the worldbuilding is just about nonexistent. It really isn’t about that, though. It’s about the conversations, the interactions, the poking and prodding at the nature of beliefs, traditions, and viewpoints.

I started from the premise, which sort of came with the brief, that priests and religion are full of shit; from there it followed naturally that the morality they espouse must be false or faulty. Having established the side I was on I looked around for arguments to support it.

And while Salonius is saying this, you never really do figure out if he actually believes what he says in half the novel, or if he says it because he knows he can make a buck off of some of his more daring philosophies. Regardless, the book is full of stuff like that, quotes and passages that are full of Parker’s wry humor, while poking at things that many hold sacred.

And oh, dear reader, it’s like he wrote this book just for me.

The Devil You Know is basically comprised of a few conversations between Salonius and the minion from hell who was assigned his care. And, hands down, not many people can do dialogue better than K.J. Parker. Period.

This novella is told from two first person points of view, and this might be my only gripe about the entire work. The perspective changes can be abrupt, and the voices do sound quite similar so sometimes it was easy to get a little confused before my mind caught up to the fact that the other person was actually telling this portion of the story.

In the end of it, this is a novella that pokes a lot of holes in the nature of belief and human nature in general, and I found it interesting that Salonius ended up seeming less human, while the minion from hell seemed to be the most human. The roles slowly reversed throughout the novella, and that seemed to hold the biggest messages, to me.

This is all done with Parker’s wry humor that I love so much. He has a way with making serious, heavy stories hilarious, and that humor makes it all so much more poignant. And the truth of it is that this is quite a heavy novella, with a ton of really thought provoking, rather deep ideas that are toyed with. That wry humor added into these weighty topics makes them much more palatable.

I’ve come to the personal conclusion that Parker can do almost no wrong, but I will say that I think his novellas are much stronger than his novels (though The Engineer Trilogy is still one of my favorite series out there right now). The Devil You Know is really an example of why his novellas are so incredible. They are short, pack a gigantic punch, and every last detail is honed to perfection. This creates a shockingly absorbing, astoundingly thought provoking, easily digestible story that is undeniably unforgettable.

So basically I can sum this up with K.J. PARKER IS STILL AMAZING. And this novella was just about everything I’ve ever wanted K.J. Parker to write, and never really realized I wanted him to write until I read it.

Or something. Feel free to mentally substitute something that actually makes sense in that last paragraph.