(Giveaway details at the end) 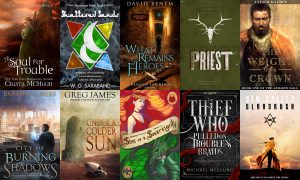 This is a unique bundle, its books chosen not by me, but by reviewers who took part in the first Self-Published Fantasy Blog-Off organized by Mark Lawrence. Each reviewer received over twenty-five books and a mission: Choose one. This bundle contains the books those reviewers put at the very top of their list.

The SPFBO Bundle includes some of the coolest indie fantasy around. Crista McHugh’s A Soul for Troublegives you a witch named Trouble, possessed by the god of chaos. William Saraband’s Shattered Sands follows a slave girl suddenly empowered by forces older than the desert itself. You’ll delve into the more-than-murder mystery of Matthew Colville’s Priest, and follow another priest trying to save the world after the gods disappear in Barbara Webb’s City of Burning Shadows. And The Weight of A Crown from Tavish Kaeden serves up the deep epic of a recently-united realm on the verge of fracturing.

There is the sharp warrior who knows the value of leaving heroism behind in Under A Colder Sun by Greg James, and the ruined hero who chances into a way to surmount the past in David Benem’s What Remains of Heroes. Plague Jack delves deep into a brutal world of conspiracies, consequences, and backlash against a conqueror in Sins of the Sovereignty. Ben Galley smacks a young man into a frontier Wyoming filled with blood magick and secrets in Blood Rush. And Michael McClung’s The Thief Who Pulled On Trouble’s Braids—the novel scoring highest in the Self-Published Fantasy Blog-Off—races along with a sassy, smart thief who must find an artifact everyone thinks she already has before she’s killed for it.

StoryBundle lets you choose your own price, so you decide how much you’d like to support the writers. For $5—or more, if you’d like—you’ll receive the basic bundle of five novels in DRM-free ebook format. For the bonus price of at least $15, you’ll receive all ten novels. If you choose, a portion of your payment will go toward supporting different charities such as Mighty Writers and Girls Write Now. Over the years, StoryBundle and its participating writers have donated thousands to support awesome charities doing great work.

The Self-Published Fantasy Blog-Off Bundle is available for only three weeks, so now is the time to pick up this unique collection of reviewer-beloved fantasy novels, and discover new independent writers who want to take you on thrilling adventures through worlds you’ve never seen with characters you want to know (even if a few of them are rather terrifying). – Blair MacGregor

For StoryBundle, you decide what price you want to pay. For $5 (or more, if you feel generous), you’ll get the basic bundle of five books in any ebook format worldwide:

If you pay more than the bonus price of just $15, you get all five of the regular titles, plus five more:

The bundle is available for a very limited time only, via http://www.storybundle.com. It allows easy reading on computers, smartphones, and tablets as well as Kindle and other ereaders via file transfer, email, and other methods. You get multiple DRM-free formats (.epub and .mobi) for all books!

It’s also super easy to give the gift of reading with StoryBundle, thanks to our gift cards – which allow you to send someone a code that they can redeem for any future StoryBundle bundle – and timed delivery, which allows you to control exactly when your recipient will get the gift of StoryBundle.

StoryBundle was created to give a platform for independent authors to showcase their work, and a source of quality titles for thirsty readers. StoryBundle works with authors to create bundles of ebooks that can be purchased by readers at their desired price. Before starting StoryBundle, Founder Jason Chen covered technology and software as an editor for Gizmodo.com and Lifehacker.com.

I will be giving away TWO (2) codes for two different people to receive all the ebooks in this bundle. Leave a comment on this post to enter. The giveaway will run from today (April 14) through Saturday, April 16 at midnight, Mountain Time. Only one entry per person. Winners will be chosen randomly and announced on Monday, April 18.