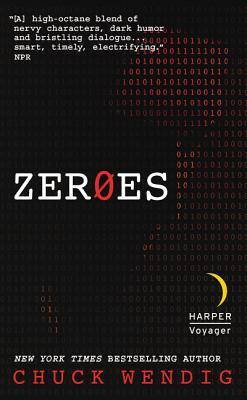 An exhilarating thrill-ride through the underbelly of cyber espionage in the vein of David Ignatius’s The Director and the television series Leverage, CSI: Cyber, and Person of Interest, which follows five iconoclastic hackers who are coerced into serving the U.S. government.

An Anonymous-style rabble rouser, an Arab spring hactivist, a black-hat hacker, an old-school cipherpunk, and an online troll are each offered a choice: go to prison or help protect the United States, putting their brains and skills to work for the government for one year.

But being a white-hat doesn’t always mean you work for the good guys. The would-be cyberspies discover that behind the scenes lurks a sinister NSA program, an artificial intelligence code-named Typhon, that has origins and an evolution both dangerous and disturbing. And if it’s not brought down, will soon be uncontrollable.

Can the hackers escape their federal watchers and confront Typhon and its mysterious creator? And what does the government really want them to do? If they decide to turn the tables, will their own secrets be exposed—and their lives erased like lines of bad code?

Combining the scientific-based, propulsive narrative style of Michael Crichton with the eerie atmosphere and conspiracy themes of The X-Files and the imaginative, speculative edge of Neal Stephenson and William Gibson, Zer0es explores our deep-seated fears about government surveillance and hacking in an inventive fast-paced novel sure to earn Chuck Wendig the widespread acclaim he deserves.

I’m hugely into cyberpunk right now. I think the exploration of how technology and social/political issues impact each other is fascinating. There is some great commentary and very thoughtful examinations of current events, and the potential evolutions and impacts of current events.

I also love Chuck Wendig’s writing. He’s one of my favorite authors out there right now, bar none. He has the dry, sarcastic, smart humor that just works for me, and writing that is effective and shockingly direct. So when I heard that Master Wendig was taking a bit of a foray into cypberpunk/technothrillers I was there with bells on.

Zeroes starts out feeling like a thriller we’ve all probably read before. A group of people who have never met before, from all walks of life, are given a choice to either go to prison for ten years due to their hacker crimes, or work for one year for Big Brother in a remote, controlled location known as “The Lodge.”

Things get interesting when you get these different people in one small, confined location. Personalities clash, people start playing covert games to manipulate other people. Lines are drawn and crossed over. It starts out as something you’d expect to see in a situation like this. Essentially a small society is developed in this backcountry, full of a bunch of people who make their livings breaking the law (hacking). There are power struggles, and the people at The Lodge push and pull and learn the limits of their confinement and how their small society will manage to function during their time there.

Then, slowly, Wendig strips all of this away. The pushing and pulling gets a bit more dramatic, and makes more of an impact on the situation, and the people involved. It stops being a bunch of people dealing with their situation, and starts being something with a bit more heft. There are plot twists, and power struggles and plenty of moments where you think you know someone, and then suddenly their colors change. And I should mention there that one of Wendig’s strengths is dialogue, and his books tend to be pretty dialogue heavy, but I appreciate the hell out of that with him. His conversations are absolutely fantastic, and in a book this tense and mysterious, with such a diverse array of characters, his mad dialogue skills are really shown off.

And as these personal powers struggles are going on, facts are slowly revealed about just what they are doing at The Lodge, and the far reaches of what they are hacking. Insert into here government organization, secret government organization, artificial intelligence and basically whatever else. Wendig also draws on things like the Arab Spring, which added a really nice touch and some interesting insight into the role of hackers in situations like that, card sharks, and plenty more. We see, slowly, how all these diverse personalities who had almost nothing in common, who spent just about as much time locked in a power struggle as they did doing their work for Big Brother, can come together and do something powerful, with global impact.

There are multiple perspectives in this book, and I really enjoyed seeing how different people from different walks of life approached the situation. It gave this book a more well-rounded feel. Some characters get a bit more attention than others, and I can see where some readers might feel like the voices kind of merge together on occasion and lack a bit of the diversity readers will use to tell them apart with ease, but it was easily overlooked to me in favor of the story being told.

The action will keep you on the edge of your seat, and the personal, group, and political drama is absolutely riveting. Wendig throws in a lot of details that shows how well he has researched a lot of these hacker-ish topics that are dealt with here. He paints an interesting, stark, almost terrifying picture of just how politics and technology can mix and mingle to create something giant and terrifying and shockingly realistic.

Wendig’s signature humor is here, and his straightforward writing his part of why this book works so well. He says what he means and he says it how he means to say it. Wendig wastes no words. He almost pushes the story at his readers with shocking force, and you’re left to either sink or swim. This book is full of ideas, and complex insights into our global economy and many situations that have faced societies around the world, and plenty of science woven in to keep you happy. In some ways this is a David and Goliath story, and it is so very well done. The giant and the little guy, in conflict, as told only the way Chuck Wendig can tell it.

Grab this book, get comfortable, sit back, and enjoy the ride.