Over Your Dead Body – Dan Wells 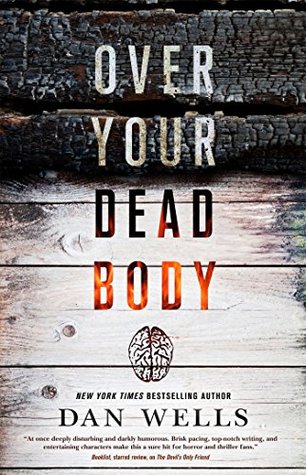 John and Brooke are on their own, hitchhiking from town to town as they hunt the last of the Withered through the midwest— but the Withered are hunting them back, and the FBI is close behind. With each new town, each new truck stop, each new highway, they get closer to a vicious killer who defies every principle of profiling and prediction John knows how to use, and meanwhile Brooke’s fractured psyche teeters on the edge of oblivion, overwhelmed by the hundreds of thousands of dead personalities sharing her mind. She flips in and out of lucidity, manifesting new names and thoughts and memories every day, until at last the one personality pops up that John never expected and has no idea how to deal with. The last of Nobody’s victims, trapped forever in the body of his last remaining friend

303 pages (paperback)
Published on May 3, 2016
Published by Tor
Author’s webpage
Buy the book

I have absolutely loved the evolution of the John Cleaver series. Each book seems to surprise me in ways that surprise me (har har). Dan Wells is a fantastic author, and he managed to get into the head of someone like John Cleaver, and bring him to life so brilliantly. But his books are also never stale. John always faces an interesting dilemma, and Wells really gets into his psychology quite brilliantly.

Over Your Dead Body, in some ways, brings the whole John Cleaver series back to its twisted roots, and kind of twists them a little bit more. John and Brooke are on their own, hitchhiking across the country, trying to find the last of the Withered while dodging the FBI. In the process of all this, John runs into a serial killer who is killing all the ways that he dreams of killing.

This one is hugely psychological. Brooke, for one thing, shares her mind with thousands, perhaps hundreds of thousands of dead people who each remember how they have died and who pop up at the most random times, sometimes they are fairly harmless, but other times they are completely detrimental and absolutely dangerous, as is witnessed at the start of the book.

This often leaves John off kilter a bit. He never really knows who he is talking to, so he’s on edge, and they are in an unpredictable situation which also throws him off his axis a bit, too. This is John in the least controlled environment I’ve seen him in yet. Then suddenly Brooke starts manifesting the personality of the only person that John has ever loved. And compiled with this is a truly horrifying plot where they are on the run, hunting the last of the Withered, and he’s tracking a demon who is reading his mind and killing people the ways that he wants to kill people – basically living out his dreams.

This entire book is one psychological mind trip, where half of you feels horrified and the other half is just transfixed with all these moral and emotional dilemmas that seem to slam into John and Brook with a relentlessly quick pace. Wells has a way with writing where he manages to convey deep ideas and powerful emotions with as few words as possible, which makes his books so surprisingly powerful and quick to read. The twists and turns happen on an almost constant basis.

The book moves quickly, and while the plot is interesting, the personal and interpersonal problems faced are just about as captivating as the plot, if not more so. This book is dark, and Wells really managed to get into the heads of Brook and John with a depth that I haven’t really seen for a few books.

Over Your Dead Body was one of my favorite books in this series so far. And that’s really saying something because every book seems to impress me more than the last. This one, though, really went further than the previous books. It’s full of twists and turns, and it’s oh-so-dark. It’s also intimate and personal, and Wells seems to decide to take a bunch of chances, and his chances all pay off big time.

I think it is essential to read previous books in the series before you hit this one, but it is absolutely worth your time. There are very few series that get into my head the way that this one does. Wells is a spectacular author, and he deals with these tough, often misunderstood topics, with poise, ease, and a bit of grace. Over Your Dead Body is a captivating blend of intimate and shocking, but at the end of the day it is absolutely unforgettable.