Note: This review is originally posted on Our Words.
— 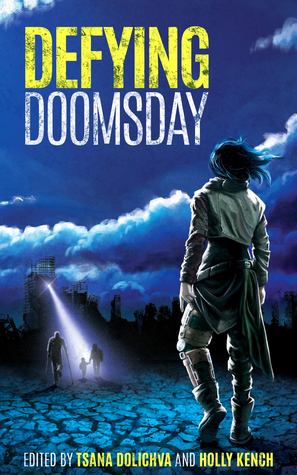 Teens form an all-girl band in the face of an impending comet.

A woman faces giant spiders to collect silk and protect her family.

New friends take their radio show on the road in search of plague survivors.

A man seeks love in a fading world.

How would  you  survive the apocalypse?

Defying Doomsday is an anthology of apocalypse fiction featuring disabled and chronically ill protagonists, proving it’s not always the “fittest” who survive – it’s the most tenacious, stubborn, enduring and innovative characters who have the best chance of adapting when everything is lost.

432 pages (paperback)
Published on May 31, 2016
Published by Twelfth Planet Press
Buy the book

It’s always hard for me to review anthologies, because I want to talk about each story, but in the end I think the most productive thing is to talk about the work as a whole, with some mentions here and there. Well, in reality, I’m just going to feel my way through this and you, dear reader, will just have to deal with it.

Defying Doomsday has been on my radar for a while. The idea is fascinating – a bunch of stories where the central characters are disabled in some way, or suffer from chronic illness or something along those lines. Each character is facing the end of the world. These various world-ending scenarios happen in numerous, varied ways, and the settings are just as varied.

The cohesive center of this anthology is disabilities + the end of the world. On the surface, this is interesting. I mean, how many anthologies have you read that have tackled both subjects in one volume? But as soon as you start this book, you realize that this one is going to be something different.

The introduction (written by Robert Hoge) kind of lays out the foundation for why this anthology is going to be so wonderfully different. Here’s a quote:

So much of our world is not a made-for-us-space that disaster might as well have already struck. And that’s exactly what makes the stories in this anthology so crunchy and interesting – we are already fighting and thriving in interesting and diverse ways. When the apocalypse comes, we’ve got a head start.

You see, while this anthology focuses on disabilities, none of these disabled or chronically ill characters are even close to helpless. In so many ways, we do have a leg up on other people because, like Hoge says, we’re already living in a world that’s not made for us. This idea that he presents in that paragraph is felt in each story, where the disabilities tend to make things a little more difficult, but that’s balanced out by the fact that these disabilities also make the characters stronger, more determined, more creative, in these apocalypse scenarios. And while the disabilities do exist, they aren’t the focus of the stories. What I mean is, the stories aren’t really about disabilities, but about characters, who happen to be disabled, navigating through the end of the world in very different, very interesting ways.

And it’s real. They are all real, whether the stories are set in California, Australia, or the moon. It was quite wonderful to see how the authors so flawlessly worked in such a diverse cast of characters, facing so many different apocalypses, in so many different ways. Every story in this anthology featured a shockingly human protagonist, with shockingly human motivations. The writing was fantastic, and the character building, to a story, was superb.

This anthology really is incredible, and not just for the disabilities and how they are portrayed, but it’s obvious that the editors spend so much time really getting this thing perfect. The stories flow together well. The writing is all superb. No two stories are even close to similar in any real respect. It spans the gamut of humanity, disaster, style, interpretation, and really whatever else you can think of. Each story is powerful; some are haunting – Seanan McGuire’s stands out in that regard, it was haunting, and lonely, but so well done. Some are empowering, like Corinne Duyvis, where a disabled girl rallies just about everyone in the face of an impending comet. You have stories about close relationships and taking chances, like “To Take into the Air My Quiet Breath.” And there’s a bit of romance in, “Did We Break the End of the World?”

This anthology is incredibly important, and I think it is absolutely essential reading for anyone in the genre. It’s important for people to see the disabled as capable, powerful people who have the ability to manipulate events, save others, save themselves, and have the same pitfalls and strengths as anyone else. It’s important because these aren’t stories about people with disabilities, these are stories about the end of the world, where people with disabilities happen to be taking refreshingly broad, important leading roles.

It was important to me, as a disabled person helplessly watching her body degrade and degenerate, to see people I could relate to in many different ways, doing these powerful things. Some stories were lonely, some were full of people, but in every single one of them, there were strong lead characters who shined bright, and did incredible, normal, powerful, human things and never really let their disabilities hold them back. It was nice, for a change, to see stories where the disabled person isn’t pushed to the sidelines early on, or where they don’t only play a supporting or token role.

I’ve been trying to think of how to portray an idea the whole time I’ve been writing this review, and I’m still not sure if I’ve got the words down right, but I’ll give it a try. This book is important, because it shows that disabled people are actually people. While our disabilities absolutely impact what we can and can’t do, this anthology never once defines any of the characters by their disabilities. They are people, who happen to have disabilities and/or chronic conditions. It changes how they do things, but it doesn’t change the fact that they can do things. I feel like a lot of books and stories with disabled characters turn into narratives about a wheelchair with a person in it, rather than a person who uses and wheelchair (for example). This anthology blows that out of the water, turns it on its head, and shows what we are capable of.

This is how disabilities should be portrayed in our literature.

Standing ovation for the editors. Bravo.