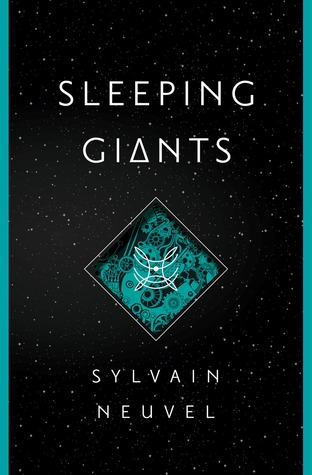 A girl named Rose is riding her new bike near her home in Deadwood, South Dakota, when she falls through the earth. She wakes up at the bottom of a square hole, its walls glowing with intricate carvings. But the firemen who come to save her peer down upon something even stranger: a little girl in the palm of a giant metal hand.

But some can never stop searching for answers.

Rose Franklin is now a highly trained physicist leading a top secret team to crack the hand’s code. And along with her colleagues, she is being interviewed by a nameless interrogator whose power and purview are as enigmatic as the provenance of the relic. What’s clear is that Rose and her compatriots are on the edge of unraveling history’s most perplexing discovery—and figuring out what it portends for humanity. But once the pieces of the puzzle are in place, will the result prove to be an instrument of lasting peace or a weapon of mass destruction?

I devoured this book, which is saying something considering how I haven’t really been going for this type of thing recently. I got it from the library, and chewed through it in two days. So really, that’s all you need to know. It was good enough for me to read it really fast.

On the other hand, there are other things you should know.

For example, Sleeping Giants is told in a very unique way, through a series of interviews, case files, journal entries and the like. If unique narratives are your bag, then pay attention to this one. If that sort of thing bothers you, then this book will drive you absolutely crazy. On the one hand, this was very effective story telling. The same characters are interviewed over and over again by a mysterious figure. Throughout these discussions, journal entries, etc., readers learn quite a bit about the inner workings of the characters that are involved in this story. That makes the moral and emotional dilemmas that crop up that much more poignant and jarring.

On the other hand, this format made some of the scientific bits of the story hard for me to really absorb. Instead of just reading about something, you’re reading these discussions where the characters are telling someone else about something. That’s kind of hard for me to explain any better than that. Basically, this requires these characters to go on some long tangents that felt a bit…awkward in places, and it made some of these bits of scientific jargon harder for me to absorb and fully understand. It also made some action sequences slightly jarring, like how I’d imagine reading an interview with my husband about a game he played.

So the question/answer format worked. It hooked me, it made this book absolutely fly by, and it really got me into the heads of these main characters. On the flip side, it made some of the action feel a bit videogame-ish, and made it harder for me to get into the scientific jargon with some awkward bits of dialogue.

The plot of the book is fantastic, and just as unique as the way the story is told. Basically it’s a sort of “first contact” book (kind of….sort of….?) where humanity is discovering something left behind by an advanced civilization. Interesting, and very well done, but it was really the impact of technology + civilization that really did it for me. There are a lot of moral issues that crop up throughout the book, really from the very start. Some of these moral issues are more subtle and unexpected, but some are quite loud and in your face, and it’s all handled very, very well. The fact that readers get so far into the heads of these main characters really helps many of these moral issues feel that much more important and real.

It’s a thought provoking novel, which surprised me. I thought this would be some sort of fun romp through a what-if scenario. I’d read it fast, and then leav it. I didn’t honestly expect Sleeping Giants to sink its teeth so far under my skin, and I absolutely didn’t expect such a thoughtful exploration of science, technology, and it’s impact on society, politics, and personal lives.

While I absolutely do not think this book is for everyone, I do think it is worth trying out if you’re into something different. It’s a shockingly absorbing book that readers are sure to breeze through at a quick speed. Sleeping Giants is one of those rare books that somehow combines deep themes with a fun, fast plot. The way this story is told is unique, and I think that format will make it or break it for readers, but I ended up enjoying this far more than I expected I would. Somehow this novel got under my skin. Yes, it has flaws, but those flaws made it even more interesting.