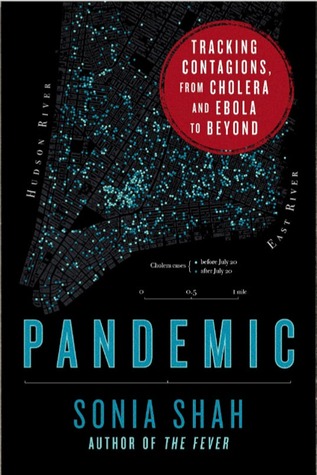 Scientists agree that a pathogen is likely to cause a global pandemic in the near future. But which one? And how?

Over the past fifty years, more than three hundred infectious diseases have either newly emerged or reemerged, appearing in territories where they’ve never been seen before. Ninety percent of epidemiologists expect that one of them will cause a deadly pandemic sometime in the next two generations. It could be Ebola, avian flu, a drug-resistant superbug, or something completely new. While we can’t know which pathogen will cause the next pandemic, by unraveling the story of how pathogens have caused pandemics in the past, we can make predictions about the future. In Pandemic: Tracking Contagions, from Cholera to Ebola and Beyond, the prizewinning journalist Sonia Shah—whose book on malaria, The Fever, was called a “tour-de-force history” (The New York Times) and “revelatory” (The NewRepublic)—interweaves history, original reportage, and personal narrative to explore the origins of contagions, drawing parallels between cholera, one of history’s most deadly and disruptive pandemic-causing pathogens, and the new diseases that stalk humankind today.

To reveal how a new pandemic might develop, Sonia Shah tracks each stage of cholera’s dramatic journey, from its emergence in the South Asian hinterlands as a harmless microbe to its rapid dispersal across the nineteenth-century world, all the way to its latest beachhead in Haiti. Along the way she reports on the pathogens now following in cholera’s footsteps, from the MRSA bacterium that besieges her own family to the never-before-seen killers coming out of China’s wet markets, the surgical wards of New Delhi, and the suburban backyards of the East Coast.

By delving into the convoluted science, strange politics, and checkered history of one of the world’s deadliest diseases, Pandemic reveals what the next global contagion might look like— and what we can do to prevent it.

I’ve always been a huge sucker for the spread of illness in books I read. I blame part of that on my degree in health science, but another part is just because I’m morbid. It’s the one thing that I can believe could actually happen any day, without warning at all. BAM, suddenly a virulent strain of something or other just swamps your location and life as you know it is over. It chills me to the bone, and apparently I enjoy being chilled to the bone because here I am, reading an entire nonfiction novel about the stuff.

Shah covers some weighty topics in this novel, but she has real skill with boiling things down to their roots so the thick concepts are easier to understand and digest, and she never really digresses into navelgazing or pondering too many what-ifs and could-have-beens. It’s business. She goes in, says what she needs to say, presents facts to back up her story, and leaves. It’s perfect.

Now, there are a lot of ways that she could have gone about writing this book, and I think most of them would have been too scattered to really make much of an impact on readers. She chose a smart mode of discussing this topic of pandemics. She traced a few bugs and their impact on history, and sort of added modern day details, insights, and extrapolations as she went. In this way, not only did she manage to fill in a lot of historical gaps that I had, but she also gave me more “Ah ha!” moments than I can possibly recall.

The disease that she mostly chose to follow through history is cholera, and it was incredibly enlightening, and rather terrifying to learn just how much of a global impact this one illness has had. Shah really gets into it, from where exactly cholera came from, how it spread into the human species, and just where it went from there and how it spread.

Interspersed in this cholera story, which is really the story of humanity and how our understanding of health and disease has spread throughout time, is the story of numerous other viruses, like swine flu, some resistant strains of staph, ND1, and various other superbugs. She also talks about modern science, evolutions of how these illnesses are understood, and things that are possible, as well as things that are projected to happen with them. It’s not all terrifying, but admittedly some of it is.

This story travels the globe, and Shah pulls in plenty of different cultures, their cultural norms, and various struggles they face and how all of this impacts the story of viruses. For example, the cholera outbreak(s) in Haiti are covered quite a bit, because they’ve happened a lot, and each time it’s been a bit different. She discusses the health tourism trade in India, and how that’s spread the ND1 bug. She talks a bit about Ebola, and the Ebola outbreak, its impact on numerous countries worldwide, and so much more.

Shah does some absolutely meticulous research, and I could honestly find no fault in either her research or the mode she chose to tell this complex tale. It all works flawlessly together to create a really compelling, shockingly fascinating story of a threat that has impacted societies for eons, and will continue to do so well into the future. She doesn’t really present any answers, but she does raise current problems that will impact the spread of disease, like air travel, the autovaccination movement(s), health tourism, farming issues, sanitation issues, the overuse of antibiotics, and the list could go on. But the lesson is obvious, we can better address the future if we fully understand the past.

It’s not a comforting book, but it is an informative one, and in a lot of ways, studying how cholera has impacted so many different societies, and how it has been addressed, and how the virus has mutated, has helped me understand just how pandemics spread, how they start, and what we can do about them. We are, in truth, almost helpless in the face of these superbugs, but not quite. Science is amazing, and the story of humanity has told us that we will survive. Put the science, and the survival together, and in some warped, kind of twisted, sort of dark way, this is a book that actually ended up giving me a bit of hope, and a whole hell of a lot of understanding.

I listened to the audiobook, which is narrated by the author, and it is absolutely superb. Highly recommended.