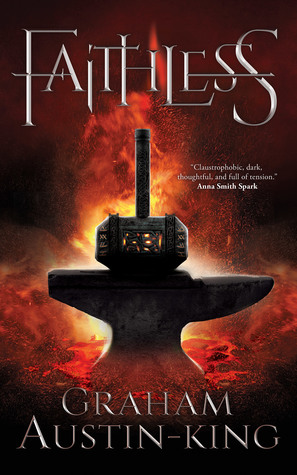 The temples of the Forgefather have fallen. The clerics and defenders that could once be found across the nine lands are no more. Priests huddle in the great temple, clinging to the echoes of their lost religion. But the Father has fallen silent. There are none who still hear his voice.

The mines of Aspiration lie far below the temple’s marble halls. Slaves toil in the blackness, striving to earn their way into the church and the light. Wynn has been sold into this fate, traded for a handful of silver. In the depths of the mines, where none dare carry flame, he must meet his tally or die. But there are things that lurk in that darkness, and still darker things within the hearts of men.

When the souls bound to the great forge are released in a failed ritual, one novice flees down into the darkness of the mines. The soulwraiths know only hunger, the risen know only hate. In the blackest depths Kharios must seek a light to combat the darkness which descends.

It’s kind of hard for me to figure out how to talk about this book because I edited it, and I want to say that right up front so no one has any guess as to where my bias rests. I edited this book, so whatever I say following this paragraph you can do what you want with.

However, I can also say that I’ve been editing books for six months now, and I while I fully invest myself in everything I edit, I enjoy what I edit in varying degrees. Some books hit it off with me, others, not so much. Faithless, so far, has been my favorite book out of all of the books I’ve edited, and I want to tell you a bit about why.

I am a sucker for books that really explore personal journeys, and if those personal journeys are dark, then so much the better. I like it when an author really gets me into someone’s head, and pushes my boundaries. I enjoy the surprises. I enjoy losing myself, and becoming someone else, somewhere/somewhen else. When an author does that well, I find myself fixated. Books that explore these personal transformations in the midst of all of this chaos and turmoil are books that I can relate to on a pretty deep level, as I’m sure we all can.

At the heart of Faithless is a personal journey. It’s unexpected and equal parts heart wrenching and illuminating. This book tells the story of a young man who finds himself sold to the church, and promptly discovers a life in the belly of the earth mining for those who live their lives on the surface. It’s a story of social strata, and acceptance. It’s the story of one young man’s journey to find himself in the midst of all of the upheaval and chaos his life has become.

Of course things happen, and our protagonist Wynn finds himself in the center of a lot of pushing and pulling. Not only regarding social conflicts in the mines where he lives, but also a spiritual conflict regarding the church that dictates all aspects of his life. Graham holds nothing back. He takes his time getting his readers into Wynn’s head, and then slowly unravels this dirty, crusty, dark reality that Wynn lives in, and shows it’s even uglier underbelly. There are plenty of surprises, and “Ah ha!” moments along the way, a few, in particular, had me messaging Graham as I edited with, “Dude! What the hell just happened here?! Holy shit!” messages. It takes a lot to get me that surprised, and he managed it. Multiple times.

Another aspect of this book I feel like I should mention is the world building. I am really particular about world building. I like things the way I like them, and I often pick on details. I think the details make or break it, and Graham made a really smart decision to keep his world small here. The small scope of it allowed him to add texture and layers to things where I didn’t really expect them. There’s the hint of a wider world outside, there’s mentions of cultures and peoples and the lives they live outside. Out there. Out where Wynn and his cohort cannot go, and that’s really enough for me. Wynn’s world is dark and pretty much windowless, full of rocks and tunnels and danger and Graham took his sweet time building it up, establishing a culture, and setting up the mythology of this underground place where so many live. It was fantastic.

Another thing I mentioned a few times as I edited was that I was amazed that Graham didn’t have a lifetime of experience mining or working with ore. The amount of research he must have done is staggering. I was honestly rather flummoxed when I realized that he wasn’t a miner and all of the information, this detailed description of the practices of mining (detailed, but never overwhelming or bogging down the plot) was gleaned from asking people who knew about this stuff and the research he did on his own. I absolutely love books where I can tell that the author spent a lot of time and effort researching his topic and Graham did his research so well he literally had me fooled for about half the book. `

Likewise with the religion that dominates so much of Faithless, Graham took a lot of care to develop it in a believable way, a way that is realistic not only in the context of the world he has created, but certain aspects of it reflect on real-world themes that people will inevitably draw on as they read. It’s a complex world, and the religious overtones of it are very well done, if occasionally uncomfortable. It can be uncomfortable to face the dark truth of something that so many see so much good in. I think discomfort can often be a good thing when I’m reading, and it was no less so in this case where the discomfort in some of these themes and happenings forced me to really think about some real-world issues in a different light.

I edited it, and I loved editing it, but I also truly loved this novel, not just because I edited it and I think Graham has some serious skill, but also as a reader. This book ticked off all my boxes. It’s a story that engrossed me from the get-go. Faithless tells the deeply personal, transformative tale of Wynn, who is part of a dark, hidden world. It’s stormy, emotional and captivating, but also shockingly relatable and jarring. Along with this addicting story is some of the kind of writing that you can whip out and quote because it just sounds so good.

Faithless drops today. I’m beyond thrilled that I got to work on this project, and so excited that the rest of the world now gets to see what I found so entrancing about it.

Graham, your dark and twisted mind has served you well. Congratulations on Faithless.