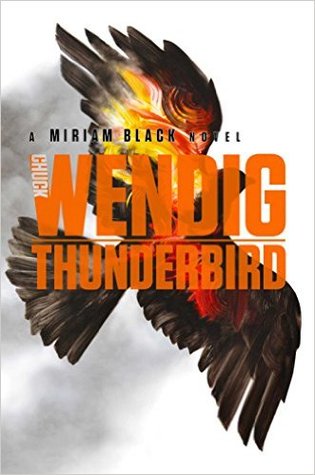 In the fourth installment of the Miriam Black series, Miriam heads to the southwest in search of another psychic who may be able to help her understand her curse, but instead finds a cult of domestic terrorists and the worst vision of death she’s had yet. Miriam Black is being developed as a TV series by Starz with the producers of Breaking Bad.

Miriam is becoming addicted to seeing her death visions, but she is also trying out something new: Hope. She is in search of another psychic who can help her with her curse, but finds a group of domestic terrorists in her deadliest vision to date.

Miriam Black is the reason why I’m glad that books exist.

You can pretty much stop reading there. That sentence says everything you need to know.

I have this weird habit of not finishing books when I really, really love them. I never want them to end, so I always leave the last fifty to one hundred pages unread. I know that’s kind of pathetic, but the truth is, the harder it is for me to read your book, the more I like it.

Finishing The Cormorant just about killed me. I wanted to read it so bad, and then I finally got it and realized that there was no possible way I could ever finish that book. Ever. I finally decided that I had to do it. I had to finish this book, and I did. And then I was all sad until Thunderbird came out.

Thunderbird, the fourth book in this series, and I highly recommend you read the first three books before you get to this one. While you can probably read this one alone, you’ll really miss out on a lot of development and emotional attachment to the storyline and characters as a whole if you start here rather than with the first book.

There was a lot here that reminded me about why I fell in love with this series. Miriam’s caustic humor, and Wendig’s ability to write gruesome, graphic scenes unapologetically is the backbone of this book as well as the previous ones. The storyline in these books tend to be quite unique as well, and they have to be. This is a dark series of books with a dark character who is kind of cursed with a dark talent for seeing how people die. The plot is just as dark, and just as unique as every other aspect of this book.

It’s been a few years since I’ve read The Cormorant, so I had to refresh myself a bit. Miriam is traveling to the Southwest to find a psychic that should help her figure out how to leave her skill behind. In the process of hunting down this woman that is incredibly hard to track down, Miriam (of course) finds herself in all sorts of sticky situations with people who land in various spots along society’s underbelly.

This book didn’t quite wow me in the same way as the previous books in the series did. I never really felt those strong, dark, horrified emotions that I felt in some of the other books. However, I do feel like maybe the focus of this book is a bit different, and therefore it’s kind of like comparing apples and oranges. Yes, a lot of the elements of classic Miriam are there, but this book is just… it’s a different animal.

Honestly, I felt like Thunderbird was a bit more of a personal, emotional struggle on Miriam’s part. It’s her facing herself, and the aspects of herself (her ability) that she doesn’t like for various reasons (you should read the series and figure it all out). Miriam is a tough-as-nails character, and in this book we’re really seeing her in a different light. Before she didn’t really like her skill with seeing how people die, but she doggedly stood by it. In this book, she’s kind of done and so we see Miriam in a different light. We know all the things that brought her to this point, but this is the book where she actually is at this ‘I’m done’ point, and it’s a more solemn note, a different kind of dark.

I liked it a lot, but yes, it is different than the other books in the series. If you go into it expecting more fun jaunts in the same voice as the previous books in this series, you’ll probably be a little disappointed. This is classic Wendig, but Miriam has changed over the years, and this book reflects those changes. There’s the caustic humor, the graphic moments, the horrifying moments… but in it’s heart, this is a book of personal struggle. It’s a different kind of dark.

And a very strong installment to one of my favorite series on the market today.