The Shadow of What Was Lost – James Islington 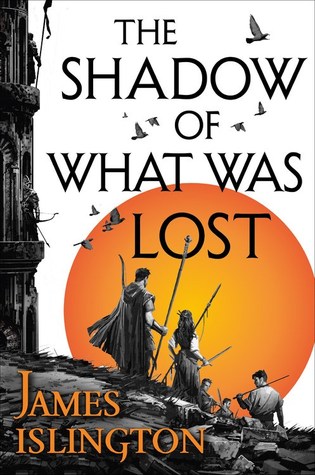 It has been twenty years since the end of the war. The dictatorial Augurs – once thought of almost as gods – were overthrown and wiped out during the conflict, their much-feared powers mysteriously failing them. Those who had ruled under them, men and women with a lesser ability known as the Gift, avoided the Augurs’ fate only by submitting themselves to the rebellion’s Four Tenets. A representation of these laws is now written into the flesh of any who use the Gift, forcing those so marked into absolute obedience.

As a student of the Gifted, Davian suffers the consequences of a war fought – and lost – before he was born. Despised by most beyond the school walls, he and those around him are all but prisoners as they attempt to learn control of the Gift. Worse, as Davian struggles with his lessons, he knows that there is further to fall if he cannot pass his final tests.

But when Davian discovers he has the ability to wield the forbidden power of the Augurs, he sets into motion a chain of events that will change everything. To the north, an ancient enemy long thought defeated begins to stir. And to the west, a young man whose fate is intertwined with Davian’s wakes up in the forest, covered in blood and with no memory of who he is…

I haven’t really been in the mood for epic fantasy for a while now. I don’t know why. Perhaps I get a bit burnt out on it. However, recently I found myself really craving a huge epic. I wanted to read a book that could knock my front door down, and drown me with its words. I wanted to read something that started big and got bigger.

So I ended up with The Shadow of What Was Lost.

The back of this book says that it’s a book for Wheel of Time fans. I read Wheel of Time when I was in high school, but that was exactly the sort of thing I was in the mood to read. And the comparison is apt. In a lot of ways, this sort of ticks off all of the epic fantasy trope boxes. There’s the chosen one (though you aren’t really exactly sure which one is chosen yet, or what they are chosen for). There’s the young man (men?) who isn’t what he appears to be. There’s the woman who is both a friend and a potential romantic entanglement. There is the group of people who venture into the unknown on a quest, and plenty of adventures and sundry happenings along the way.

It does tick off all those boxes, but that’s also what I was in the mood for. On the flip side, if you are sick of all of those roles in epic fantasy, and you’re looking for a book that perhaps paints a different picture with different colors, you’ll probably want to look elsewhere. That being said Islington is his own man, and this book is a creature of his own divining. The magic system is really unique, and a fairly recent war and some laws that are implemented due to that war have created a society where magic use, and those who use it, are really scorned by much of society. There is also another class of magic user who is prohibited. This all creates an interesting tug-of-war between the important elements of magic that propel the plot, and a society who is working hard to stifle said magic and its use.

Things happen, and in the interest of keeping things vague so as to prevent spoilers (you’re welcome), I’ll leave it there. There are a lot of twists and turns, and perhaps because I read upwards of 200 books a year and I’m pretty well versed in epic fantasy, I saw most of them coming, and there were a few occasions where I kind of wished the revelation(s) happened a bit sooner so we could move on past them. however, Islington has a knack with revealing everything in its own time, and slowly unrolling the story as he goes. There is a time and place for all of it, and despite my impatience, his judgment for when things happened and why was better than mine.

This book has a lot of layers, and a lot of tension between characters, in developing relationships, in the mysteries that end up surrounding everyone and everything, and between various aspects of the cultures that are introduced here. Islington has a knack for knowing when the atmosphere needs to be amped up, and when he needs to let things rest for a bit before he piles more on. It was never overwhelming, and the levels of said tension always felt just right as the book progressed. Things start out with three innocent, rather young friends, and as the book progresses events force each of these characters out of their comfort zones, and into territory that forces them to grow up. Islington puts his characters through their paces, and many of them ended up developing in ways that I didn’t expect, shedding their childish natures as the book progressed, and as tension forced them to become something a bit more.

It was quite well done.

This novel is a doorstopper. It’s a thick beast, but Islington manages to fill each page with something interesting. I eagerly turned every single one of them, and when the time hit for me to put the book down for a bit, I did so reluctantly. This is one of those epic fantasy books that starts out feeling comfortable, tried and true, and then it turns into something else, something that is its own kind of lovely. It’s full of tension and atmosphere, a wide world with hints of wider things over the horizon. There are elements here that pay homage to many of the classic genre epics that most of us think of when we think of epic fantasy, but in the end, this is all Islington. This is his brainchild, his visual and descriptive writing, his addictive characters, and his fast-paced genius.

The Shadow of What Was Lost is an epic fantasy that stands nicely alongside such genre classics as The Wheel of Time, and Memory, Sorrow, and Thorn. Highly recommend.