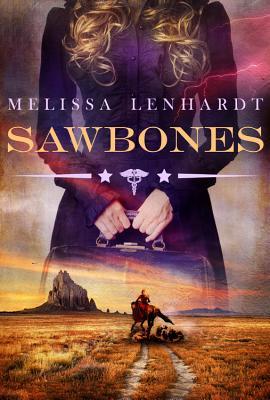 Wrongfully accused of murder, Dr. Catherine Bennett is destined to hang… unless she can disappear.

With the untamed territory of Colorado as her most likely refuge, she packs her physician’s kit and heads West. But even with a new life and name, a female doctor with a bounty on her head can hide for only so long.

Sawbones is the first novel in a gripping historical fiction series.

When I saw this book on Orbit’s Netgalley page, I wondered what the hell they were doing. You see, I’ve always equated Orbit to being a speculative fiction publisher, but here was a historical fiction and it caught me off guard. So of course I had to nab a copy of this book to see what was going on. And oh, I’m so glad I did.

I’m a fan of Wild West books, usually of the Weird West variety, with a nice dose of speculative fiction thrown in for me to chew on. This was really my first historical fiction, no speculative elements at all, Wild West book.

Sawbones is the first book in a trilogy. It’s a historical fiction set in the Wild West in the late 1800’s, where there is a lot of untamed land, and a whole lot of people willing to risk a whole lot of stuff to go hack it out in the wilderness, live a rough life as best they can.

Enter our protagonist, one Catherine Bennett.

Catherine is a doctor, a lady doctor in the days when ladies didn’t do things like doctoring. She’s had a life of having to fight for the right to have her own mind, and her own life, and her own career in a world that didn’t really approve of any of that. A stint of dressing like a man in the Civil War so she could help soldiers medically, and then a few other sundry life experiences have led her to the point where she’s a strong, independent, unapologetic woman.

Catherine ends up on the wrong side of the law, wrongly convicted of a crime she didn’t commit, she’s forced into hiding, so she flees New York and ends up in Texas, with the end goal of hiding out in the Colorado frontier in the hopes that the world forgets her, but on her journey to Colorado, more things happen, and she ends up sidelined by unexpected events.

This book is told in the first person, and I ended up really glad that the author wrote it that way. Catherine is an interesting character, but I don’t think a lot of the events would have been as dramatic or impactful without Catherine’s personal thoughts and perspective.

I will admit that this book is much darker than I expected. I was anticipating a book that glorifies the Wild West and sort of romanticizes it, and I was completely prepared to get sick of that real fast, but Lenhardt stayed away from any of that. The West was a rough, uncut, unpredictable, dirty, dark place and there was absolutely no glorifying it in any way. Mixed with that are the personal struggles of a woman trying to make her own way in a world set against her and you have a book that’s a lot more gothic and grim than I expected.

However, this is juxtaposed with a plot that is actually full of hope despite all of its graphic, dark elements. Catherine has a stunningly hopeful view of humanity and human nature, despite everything set against her. There is also a love story thrown in, which I kind of anticipated as soon as the man of choice was introduced to things, but I have to hand it to Lenhardt. She handled it perfectly. The romance unfolds in a beautiful way, and while heartbreaking things happen, especially at the end (I will admit to some tears on my part), the beauty of their relationship and their chemistry was a huge, vibrant, hopeful part of the book that went a long way toward balancing out all of the darkness.

Sawbones knocked my socks off. I went into it not knowing what to expect, and I ended up loving it so much I devoured it in two days flat. Just having finished it today I’m already about 30% into the second book in the series (and I usually like to rest a month or so between books in a series). This book had it all, drama, action, a strong independent, smart lead character who makes mistakes, a beautiful romance that never got smarmy or purple, and a setting that was so vibrant and well-crafted that it almost became a character in its own right. It’s a dark book that is full of beauty and hope, and struck the right note in every possible way for me.

This book was amazing. I highly, highly recommend it for fans of historical fiction. Or books. Or anything good.