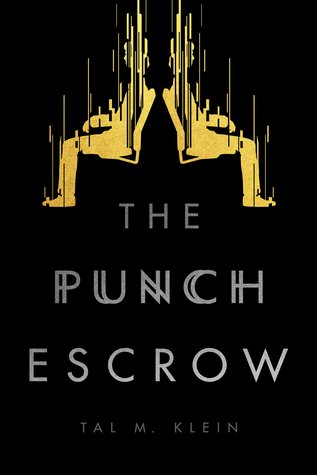 It’s the year 2147. Advancements in nanotechnology have enabled us to control aging. We’ve genetically engineered mosquitoes to feast on carbon fumes instead of blood, ending air pollution. And teleportation has become the ideal mode of transportation, offered exclusively by International Transport—a secretive firm headquartered in New York City. Their slogan: Departure… Arrival… Delight!

Now Joel must outsmart the shadowy organization that controls teleportation, outrun the religious sect out to destroy it, and find a way to get back to the woman he loves in a world that now has two of him.

I’m kind of a big fan of near-future science fiction books. I like how all of the technology is relatable, and I can see where the authors got their ideas. I like how the world is ours, but also not ours. It’s just an interesting mix of ideas based in reality that allow my mind to run away from itself and ponder all the what-ifs.

When I got The Punch Escrow, it rocketed to the top of my TBR pile. It’s the exact sort of book that I love to read. It’s a suspense filled near future science fiction that has an interesting mix of advanced technology, and all of its societal implications.

The thing about this blend of elements is that it will appeal to a broad range of readers. You don’t really have to be a science fiction fan to read this book. In fact, I think this is the kind of book that will appeal to a lot of non SciFi fans as well. If you enjoyed Ready Player One and books of that nature, you’ll probably love this one. It’s accessible, the and the story is so gripping that the SciFi elements are sort of the tapestry that decorates the story being told, rather than overwhelming the story itself.

This book is basically all about teleportation, and secrets that our advanced technology hide, the sort of dark underbelly that all of our flashing lights and beeping machines don’t really let us see.

Joel, our protagonist, is an interesting fellow. He makes a living asking machines unanswerable questions. He’s a sly guy with a quick wit and a marriage that is on the rocks. His wife works for the company that runs all of the teleportation machines as a scientist developing some secret technology. When Joel is in the middle of teleporting for a getaway with his wife, things go terribly wrong and he finds himself in the middle of a horrible situation, with no one to trust, and nowhere to go, with an iron will that refuses to let him give up.

The writing is gripping and the plot is absolutely relentless. The world that Klein developed is well thought out, and just about as interesting as the plot. There are mosquitos that have been engineered to eat pollution (can we please develop some of those?). There are the teleportation devices I’ve mentioned (which are freaking awesome). People have access to computers mentally. The world is still full of countries, but the real power rests in huge corporations (again, I can totally see this happening).

Joel’s snarky wit, and his wife’s scientific mind blend into this world well, mixing and merging into a plot that is fast paced and unforgettable. I picked up this book expecting to read a few pages before I had to put it down, but I ended up reading the entire thing in one session, which is pretty unheard of (my life is pure chaos). I was pretty much on the edge of my seat throughout. I can easily picture this turning into a movie, and a great one at that (in fact, now that I’m thinking about it I believe my copy of the book says that it is in the movie works as we speak).

The Punch Escrow was incredible. I loved the characters, and the world. The writing was fantastic and the whole thing just flowed with a grace I didn’t really expect to see in a technothriller. I’m overjoyed that Inkshares somehow got my address and sent me a copy in the mail.

If you’re looking for something short, gripping, and ranking up there among the best in technothrillers or science fiction currently out there, do yourself a favor and read The Punch Escrow.

Because damn, folks. This one was incredible.