Life has been absolutely nuts for me recently, to the point where I just threw my hands in the air and had to totally give up reviewing for a span. Hopefully now things will slow down and I’ll be able to get back into it. In this precise moment, however, I want to tell you one big thing thats been flipping things on its head.

It all started in 2011 when I reached into the closet to get a towel and my lower spine basically caved in on itself and smashed the nerve root that controls my right leg. At the time I was pregnant and fighting cancer, so I was living in extreme pain and basically unable to walk for over a year before I could get it treated. I ended up having three spine surgeries. Those, along with extensive physical therapy, got me walking again. I have lost almost complete feeling in my right leg, but luckily I retained function. I walk with a limp and when it’s bad, I use a cane.

However, those smashed nerves I mentioned above, were smashed for so long that they ended up getting smothered by scar tissue and they are constantly firing pain signals into my brain. Nerve pain is awful. I’ve been on medication, which has done nothing to help it. Physical therapy also didn’t help at all. I’ve had injections directly into the nerves. Nada. I’ve had injections into my spine. Zippola. Nothing has helped and I’ve literally tried everything. I’ve been living with this pain for six years now.

Last winter I switched to a different primary care doctor. He asked me how I was doing, and I just fell into tears in the doctor’s office. I mean, rivers of tears. You see, my nerve issues have been getting worse, to the point where I spend most nights wrestling my leg now because the nerves trigger and it moves on its own. My foot bends the wrong way. The muscles in my calf and thigh feel like they are being ripped apart. It takes hours and HOURS to get them to calm down, and it’s unimaginable agony while I try to keep my nerves from forcing my muscles to snap my leg in half like a twig. 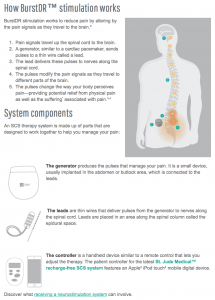 I knew that I had gone through every pain management treatment in the books, so when my doctor gave me a referral to a chronic pain management doctor and asked me to just give it a try, I decided to do just that, but I had absolutely no hope of this doctor offering to do anything any previous doctors haven’t already offered.

I’ve spent most of this year going through extensive tests and having my medical history combed through. After it was established that yes, I have literally tried every treatment to impact this pain in the books, I was sent to get an MRI. My doctor said my MRI showed that I fall under the “failed back surgery” umbrella, where, for one reason or another, the chronic pain just never goes away. In this MRI it was also established that my nerves are being smothered by scar tissue and operating in that area isn’t an option because that would just add more scar tissue and make it all so much worse.

We talked options, and that’s when I first learned about spine stimulators.

Spine stimulators are electrodes that are inserted into your spine above the injured area. Nerves send signals up your spine to your brain, so basically when the spine stimulator is on, those smashed nerves fire pain signals up to my brain, and the electrodes sort of scramble the message so my brain gets white noise. It’s not perfect, but for those it works on, it can cause a dramatic reduction in pain, with no medication or shots required.

I decided to go that route, which started another whole barrage of tests. One test was a three hour appointment with a psychologist. Due to the fact that these stimulators directly impact your brain and the signals its getting, I had to be screened to make sure that this sort of stimulation wouldn’t flip a mental switch, because that is a risk. Once I passed that exam, my insurance approved the trial period.

During the trial I was put on twilight drugs, and the electrodes were inserted via epidural needle and the battery pack was attached to my hip by tape. My St. Jude’s representative was there to program the device and show me how it worked. One week later I went back to have it removed, and talked to the doctor about my results.

I decided to really go for it and see how this device would work during my trial period. After a few days of recovery, I went back to work and I completely took myself off of my medications (I’m on a medication to calm my nerves, and a muscle relaxer). I wanted to see how this thing would work against my pain, unmedicated.

The trial reduced my pain by about 70%, and reduced my nights of fighting my nerves to one, instead of seven.

My doctor sent my trial information and patient work and all that etc over to a neurosurgeon who specializes in installing medical devices. After a wait, the insurance approved a permanent device, and my surgery was scheduled September 12. 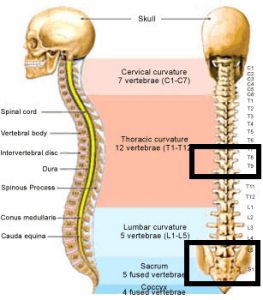 The surgery takes about an hour and a half. They put the electrodes into my T8-T9 level spine (about the bra strap range – the top box on the graphic, while my injury is in the bottom box). The incision is about four inches long. They used a paddle for these electrodes, and had to carve out a little bit of my vertebrae to place them and then stitch them in place. In about two months the scar tissue will form and hold the electrodes where they are. Until then I have to be very careful. I can’t bend, lift, or twist or it could move the paddle and that would mean another surgery.

So they put the paddle there, and then they run the wires over to the battery pack, which was installed in a pocket the doctor created in my left hip. All of this is under the skin. Once I heal, all that will be seen are scars. The battery lasts about 5-7 years, and the surgery to replace it takes about ten minutes.

During the trial, the electrodes were on wires, about the size of spaghetti. They switched them to paddles for permanent placement because the paddles give out a stronger signal, and the surgeon can direct it a lot more than they could with the wires, so I need to use less of a signal (conserves battery life) to get a better result (targets the nerve signals a lot better than the trial ones did).

I have a remote control, which for now is an ipod touch that St. Jude gave me. Apparently they are working to make the device useable on smartphones, but due to HIPPA issues, for now the app can only be used on iPod touches. It kind of sucks having two devices to carry around, but in the scheme of things, that’s really small potatoes. The remote allows me to turn the electrodes off and on, control their strength, and I have a few different programs I can use. I also have an MRI mode (I can only use certain certain MRIs). I have an airplane mode, and I have a surgery mode. Along with that, I have this nifty card I need to carry in my wallet because I can’t go through metal detectors anymore, and if there’s an emergency, people need to know I’ve got stuff going on.

I have a lot of hope, and I’m very excited that this basically eliminates the need to take medication to handle the issues associated with these nerves, so in a huge way, I feel liberated.

I have a lot of healing I need to do, but I’m really excited to see just how this transforms my life. I was basically sedentary before, just due to pain and issues moving a leg I can’t feel and all that. I’m excited to see how much more I can do. When I did my trial period, I walked through Costco and didn’t need to rest for hours after, which was incredible. I can’t wait to do that again.

I am now a cyborg.