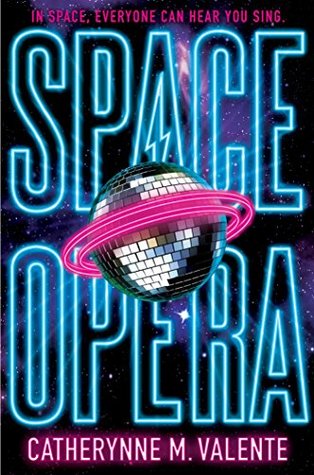 The Hitchhiker’s Guide to the Galaxy meets Eurovision in an over-the-top science fiction spectacle from bestselling author Catherynne Valente has galaxies competing for glory in a universe-wide musical contest—where the stakes are as high as the fate of planet Earth.

A century ago, the Sentience Wars tore the galaxy apart and nearly ended the entire concept of intelligent space-faring life. In the aftermath, a curious tradition was invented—something to cheer up everyone who was left and bring the shattered worlds together in the spirit of peace, unity, and understanding.

Once every cycle, the civilizations gather for Galactivision—part gladiatorial contest, part beauty pageant, part concert extravaganza, and part continuation of the wars of the past. Instead of competing in orbital combat, the powerful species that survived face off in a competition of song, dance, or whatever can be physically performed in an intergalactic talent show. The stakes are high for this new game, and everyone is forced to compete.

This year, though, humankind has discovered the enormous universe. And while they expected to discover a grand drama of diplomacy, gunships, wormholes, and stoic councils of aliens, they have instead found glitter, lipstick, and electric guitars. Mankind will not get to fight for its destiny—they must sing.

A band of human musicians, dancers, and roadies have been chosen to represent Earth on the greatest stage in the galaxy. And the fate of their species lies in their ability to rock.

This book was procured via Netgalley.

Friends, I want you all to do me a solid right now. Stop reading my website. Shut down Twitter. Stop stalking people on Facebook. Put on your shoes, get your wallet, and go to the closest bookstore. When you get there, grab a copy of Space Opera. Hell, grab two copies. No, grab the whole damn shelf of them.

You’ll thank me. I promise you.

Space Opera is unlike anything I’ve ever read before, and in this case, it’s a good thing.

First of all, we need to talk about Valente’s writing style. People, I’m going to lay this out for you without any exaggeration. Valente is one of the best writers out there. Period. End of discussion. I listen to her novella Six-Gun Snow White one to two times a year, just because the writing is that good. And everything that I love so much about that book, is carried into this one.

I think the best way to describe Valente’s writing, in this book and in her other work, is to say that it is relentless. She doesn’t stop. She hits you with how amazing she is, how talented she is, and she just doesn’t stop hitting. During Space Opera, I found myself putting the book down every few paragraphs and just absorbing. She makes connections and comparisons I’d never dream of making. She’s funny, witty, full of charming and overt humor, with an undertone of cynicism that just works on every possible level for me.

Straight up, Valente could write a shopping list, and I’d probably read it, and love it. Her writing is just that good. There are a few authors that do the world a service by writing, and she is absolutely one of them.

So, Space Opera. It’s weird. It’s quirky. It starts and doesn’t stop. There is a rock star who is glittered and bejeweled so much I could practically see the shine on the pages. He was an absolutely perfect main character of the sort who jumps out of the book and wraps around you. His life experiences are unique and just as quirky as the plot of the book itself. There’s a host of secondary characters that are just as flashy in their own ways. There is constant understated humor throughout the story as well. It’s delightful.

Then we get to the Metagalactic Grand Prix, which is sort of a beauty contest mixed with a talent show and some other things. The Metagalactic Grand Prix was created as an alternative to the constant infighting amongst sentient species in the galaxy. In Space Opera, Earth is entering its first Metagalactic Grand Prix contest. We are learning that we aren’t alone in the universe. While humans expect the typical that you’d expect from first contact – guns, diplomacy, beings that are smarter than we are, etc, we are instead thrust into this realm of the fantastic, where everything is bedazzled and the war is fought on stage.

People. This contest makes me seriously wish that this sort of thing was true.

Mix into this the “first contact” story, a creature that’s a sort of fish/flamingo hybrid, your glamorous protagonists and Valente’s writing and….

Well, honestly I’m kind of pissed that the book ended.

This has been the best book I’ve read in a very long time. It’s funny, and stunningly well written, with Valente’s relentless style and forward motion, you can’t help but be swept up in Space Opera.

I haven’t checked if it’s on audible or not, but I really think the only thing that would make this book better is an audio version of it, read by some English narrator.