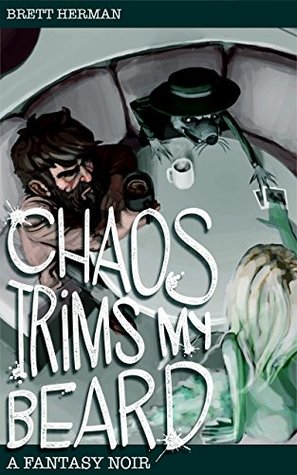 Edwayn Sattler is a half-dwarf with a beard and a dead end job. One night when serving drinks to the city’s rich and famous, a fiery playboy loses control of his magic and goes on a burning rampage. After some ill-advised heroics aided by the magic that lives in Edwayn’s beard, he finds himself unemployed and socially exiled. With no other job or friends to fall back to, he signs on with an inscrutable ratman sporting a badge and a fetching hat, and together they dive beard and whiskers first into a magical murder conspiracy that threatens to consume the city.

Armed with sub-par wits, a dry sense of humor, and a handful of magical tricks, Edwayn encounters conflagrating cops, smooth-talking trolls, shadowy corporate enforcers, and an air-headed vixen with a fatalistic streak. When his easy-going life spirals into a thrilling, darkly hilarious tale of intrigue and deception, Edwayn will find out just how close this newfound chaos will trim his beard.

Chaos Trims My Beard is interesting, for a number of reasons. First, it takes place in a sort of steampunk future, a city full of skyrises and what have you, which is really unique when you take into consideration all of the epic fantasy trope races that are in the book. Elves, dwarves, orcs, and etc. They are all here, and they are all exactly what you’d expect them to be. That being said, each trope that is played within this book has a unique twist to it, which keeps these tropes from feeling tired.

If you haven’t gathered yet, Chaos Trims My Beard is a fun fantasy, rather than an epic, serious fantasy. It did have some serious undertones, but by and large, this book set out to have fun with time-tested tropes, and it does it well, pushing and prodding right where it needs to.

This book, as I mentioned, has a noir bend. Told in the first-person point of view, readers get to experience events through one Edwayn Sattler, a half-dwarf that is down on his luck. The book starts out with a fairly easy clip, but things get going pretty fast and soon the plot really took off like it was on fire. There really isn’t a dull moment here, and that’s a good thing. With plenty of laugh out loud moments, this book hooked me pretty fast and had me enthralled almost from page one.

Some of the characters fell a little flat. All of them had a place and point in the book, and some of them felt more essential to drive the plot forward than others. However, I felt like Herman struggled a bit with fleshing out some of the secondary characters. Another point, while I really did like Edwayn Sattler, and he was exactly what the book needed, he felt a little flat to me. And, in truth, I felt like just about every character was a little flat. It didn’t really distract from the enjoyment of the book, I did feel like maybe the tropes were paid for a bit with the character development.

The ending of the book was probably the part where I struggled the most. There were so many revelations, and they were happening so fast that I often felt a little overwhelmed by it. I did feel like the constant revelations and “Ah ha!” moments in the end really did overwhelm the book itself. It was too much, all at once, and I found myself rather confused at certain points, and this did push me out of the book, and directly impact my overall enjoyment.

On an editorial aside, this book really could have used a good copy edit. There were a lot of grammar and spelling/typo issues that distracted me. I think a nice polish would have helped quite a bit.

So, Chaos Trims My Beard was a hell of a lot of fun, with some pacing issues, and characters that didn’t really grip me that much. The world building was really fantastic, though. I loved the twists on tropes and the sheer fun of the book itself. It was absolutely worth the read, and I would recommend it for others.