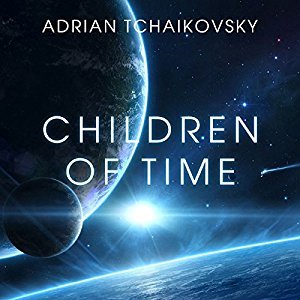 A race for survival among the stars… Humanity’s last survivors escaped earth’s ruins to find a new home. But when they find it, can their desperation overcome its dangers?

WHO WILL INHERIT THIS NEW EARTH?

The last remnants of the human race left a dying Earth, desperate to find a new home among the stars. Following in the footsteps of their ancestors, they discover the greatest treasure of the past age – a world terraformed and prepared for human life.

But all is not right in this new Eden. In the long years since the planet was abandoned, the work of its architects has borne disastrous fruit. The planet is not waiting for them, pristine and unoccupied. New masters have turned it from a refuge into mankind’s worst nightmare.

Now two civilizations are on a collision course, both testing the boundaries of what they will do to survive. As the fate of humanity hangs in the balance, who are the true heirs of this new Earth?

I procured my copy of this book via Audible.

I literally just finished this book about five minutes ago, but I want to write my review while it’s fresh. I’m also teaching a class on editing this weekend and I should probably plan it or something, so this might be my only chance for a little bit.

I bought this book on Audible a while ago, and it’s kind of been sitting there. I’ve seen a whole lot rave reviews of it, but I’ve been busy, and editing, and kind of burnt out on speculative fiction these past few months, so I just put it off until I was in the mood.

Well, the mood struck me recently, and I’m sincerely glad it did.

This tells the story about the last of humanity, sailing away from a dead Earth on ships, across the cosmos to find another planet they can live on. There’s two different stories of evolution happening here, one with a race of spiders on this far-flung planet, and one regarding the ravages of humanity living under the pressures of time on a ship that isn’t meant to last forever.

There are wars and strife, plague and exploration, and so much more. It is, essentially, the tale of humanity and development in a world away from our own.

It took very little time for me to become engaged in the story, though some of the characters gripped me more than others (when isn’t that true, though?). Tchaikovsky has a way of writing that is both bold and fluid, graceful and brave. He boils things down to their bare minimum and lets readers either sink or swim with that. Peppered throughout this narrative, which spans centuries, are characters who are all interesting in their own ways, with insights and experiences that help add layers and textures to this story, this evolution of sentient life that Tchaikovsky is weaving for his readers.

The benefit of this taking place somewhere far away from Earth, is that we lose all real attachment and predispositions to certain elements, like governmental structures, and lifestyles and all of that. In fact, other than it being mentioned that humanity changed, and Earth has died, and this is the last attempt to salvage the ravages of humanity, nothing is really mentioned about our home world. There isn’t really any extensive history or mind-boggling political extrapolations. Tchaikovsky made a choice to sort of start out the story where everyone was – the middle of the universe – and go from there, and I really appreciated that decision. Being cut free from anything I might already know about place and people helped me absorb the story in a much more even-keeled, appreciative way.

The story of Mason on the archsip happens in bits and bursts, as he’s often woken for important events but remains asleep for much of the downtime. Therefore, readers are allowed to see through windows into events, like the civil war, and various other battles, technical issues, and that incredible ending.

The story of Portia and her spider cohorts is told through numerous lifespans, by individuals who hold different roles in society. It’s an interesting way to do it, and their shared understandings that transcend lifespans, helps readers really see now just where they all started from, but how that accumulated understanding is bringing them into a promising future. It was interesting to see how completely different this society is, but also how similar in some ways, like the fight for representation between the sexes, for example, and the fight to understand the what and how of the universe, worship and spirituality, and so much more. It was hard to see past the fact that they are spiders, which are absolutely disgusting (I’m not a bug fan), but in some ways that made their story so much more powerful. Spiders are disgusting. There is no way that they aren’t the other in my mind, but the intricate story of their continued evolution (and that ending!) show that others might be a lot more similar than we think.

So, Children of Time essentially blew my damn mind.

I tell my authors when I edit their books “I want you to make me cry” all the time. I like it when I read a book, and I am sucked so deep into it I can’t tell where I end and where the book begins. I love it when an author tells a story that is so gripping, so powerful, I feel it down in my soul. I love it when a book emotionally eviscerates me and leaves me reeling and full of emotions and thoughts.

This, friends, is that book.

It’s deep, fantastically written, with a relentless narrative that doesn’t quit, and an ending that literally had me wiping away a few stray tears. Powerful. Beautiful. Haunting. Necessary.