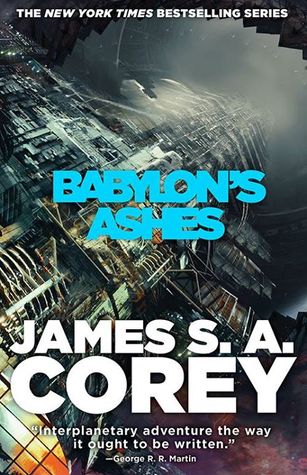 The Free Navy – a violent group of Belters in black-market military ships – has crippled the Earth and begun a campaign of piracy and violence among the outer planets. The colony ships heading for the thousand new worlds on the far side of the alien ring gates are easy prey, and no single navy remains strong enough to protect them.

James Holden and his crew know the strengths and weaknesses of this new force better than anyone. Outnumbered and outgunned, the embattled remnants of the old political powers call on the Rocinante for a desperate mission to reach Medina Station at the heart of the gate network.

But the new alliances are as flawed as the old, and the struggle for power has only just begun. As the chaos grows, an alien mystery deepens. Pirate fleets, mutiny, and betrayal may be the least of the Rocinante’s problems. And in the uncanny spaces past the ring gates, the choices of a few damaged and desperate people may determine the fate of more than just humanity.

This book was an Audible purchase.

I love The Expanse. These previous books in the series have been just fantastic and I’ve felt that each book nicely built on the previous one. This is one of those series where you need to be up-to-date before you start the new release. I will also say that the audiobooks have ruined me. I can’t read these books anymore, I have to listen to them.

Now, as I said, each book seems to be better than the last one, and in some ways, I feel like that is true here. For example, there was some superb writing in this book and some incredibly clever turns of phrase that had me stopping and making mental notes.

However, in a lot of other ways, this book was an enjoyable, strong installment to the series, but I didn’t enjoy it as much as the ones that came before. There are a few reasons for this. First, the previous books have been so action-packed, this one takes a step back. There’s action, but it’s a lot more about maneuvering, moving pieces around the board, and seeing where everyone is now that the dust is settling. This slower tempo makes sense, and it didn’t bother me, but it should be noted because it can be a reason some readers feel like this book is more of a placeholder, a book where people are being moved around for the next bit of the series, rather than a gripping book all its own.

Secondly, usually, these books are told through a tight, honed group of character perspectives. This one is told through a lot of points of view, some from previous books, some that are characters that we’ve been introduced to before but haven’t really had their own chapters yet, and our own tight crew, who also hold some limelight. Now, this was refreshing because you get all sorts of perspectives from all sorts of people on all sides of issues, but this was really what held me back from enjoying the book as much as I wanted to. There were just too many points of view. They all had important stories to tell and added nice perspectives to an incredibly complex issue that’s spanning the solar system, but there were just SO MANY OF THEM.

Thirdly, I thought the idea of Holden sending out these short videos, the equivalent of Youtube videos, about belters was a nice emotional touch, but as a plot point, it seemed kind of ridiculous. I mean, I get the logic there, but I think it was almost unbelievably naive for him to think that he could actually influence anything between belters and Earthers when both populations are so absolutely ravaged by what has come before. I mean, I get it, and I did enjoy the emotional appeal, but Earth was dying, and so were all the people on it, and I just really don’t see how videos would change/influence that at all. I mean, at that point its sort of beyond the point where short videos will humanize anyone.

I also think that the antagonist was sort of underwhelming, falling into old patterns with very little character development, appearing to be more of a lurking creeper rather than a mastermind. He had potential, the ability to manipulate people and arrange things with ease, but he just underwhelmed me. He spent a good chunk of the book in his cabin or hiding behind the scenes. Ultimately, I found him to be rather “meh” while the story of his son was much more interesting, very well done, with his emotional conflicts painted in bright vivid colors for readers. Philip shined when compared to his father, who had tons of potential but ultimately fell a little flat.

So, this book was a horse of a different color. Lots have happened in the previous books in the series, and this one, in my opinion, was a much-needed breather, a pause between events. While events do happen, this book had a feel of pieces moving around the gameboard more than anything else. It felt like a setup for what happens next. That’s fine, and it’s a strong installment to a series I’ve fallen in love with, but it didn’t woo me quite as much as the previous ones. Bogged down by too many POVs, and some plot elements that were quaint but didn’t really hold up when a microscope is focused on them. That’s okay, though, because the core of the series is there, and it’s strong. The family I return to when I read these books is still strong, vibrant, and fantastic to read about.

More than that, though, The Expanse is about change. Changes in people, planets, governments, solar systems, ships, families, and so much more. While this book, in a lot of ways, is quieter than the previous, that core element of this series is still there, and that’s what keeps me coming back. Strong writing, a relentless forward motion, and incredible writing, Babylon’s Ashes is a good book in an incredible series, and I can’t wait to see what happens next.