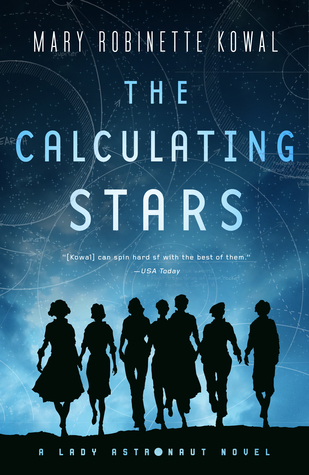 A meteor decimates the U.S. government and paves the way for a climate cataclysm that will eventually render the earth inhospitable to humanity. This looming threat calls for a radically accelerated timeline in the earth’s efforts to colonize space, as well as an unprecedented opportunity for a much larger share of humanity to take part.

One of these new entrants in the space race is Elma York, whose experience as a WASP pilot and mathematician earns her a place in the International Aerospace Coalition’s attempts to put man on the moon. But with so many skilled and experienced women pilots and scientists involved with the program, it doesn’t take long before Elma begins to wonder why they can’t go into space, too—aside from some pesky barriers like thousands of years of history and a host of expectations about the proper place of the fairer sex. And yet, Elma’s drive to become the first Lady Astronaut is so strong that even the most dearly held conventions may not stand a chance.

I put The Calculating Stars on my hold list at the library as soon as I heard it was out. I jumped on this book, but even then, I had quite a wait to get it. This book was hot before it even dropped, and there’s a reason for that. Kowall is a well-known author, who has a lot of incredibly loved books on the shelves. People see her name, and they race to her books.

There’s a reason she’s so popular and loved among the bookish community: she’s a hell of a good writer, and she tells incredible stories.

Now, here’s where I hit you with some honesty. I’ve always loved her writing, and I’ve always respected the hell out of her stories, but I’ve also always kind of bounced off of them. I’m not sure why. There’s nothing wrong with her, and there’s nothing I can point at in her books. I honestly think this is an “it’s not you, it’s me” case, and I mean every word of that.

So, knowing that, understand, dear reader, that I loved this book. I devoured it. I couldn’t stop reading it, and at 23 pages in, I made the prediction that this sucker will get a Hugo nomination next year. It’s that good.

The Calculating Stars tell the story of Elma York. In 1952, earth is hit by a meteorite. She and her husband survive while they are on a vacation, and end up on an air force base in Ohio. As you can imagine, this throws the world into chaos, and our protagonist and her husband find themselves in the middle of it all.

This is told from Elma’s point of view, so we get more of her perspective on things, but I will say that a lot of secondary characters tend to suffer in first-person narratives. This is not that case. Kowall developed all of her characters nicely, and they all felt just as real as Elma, and Elma was quite incredible. She’s a dynamic character who is passionate and full of life. Mixed in with that, she’s a woman at a time when women weren’t supposed to do more than cook dinner. She’s Jewish, and devout, right after World War II, and she’s got anxiety, of the medical kind (throws up, flips out, etc.).

The Calculating Stars tells the story of a world trying to recover from a disaster, and the women who play a central role in helping humanity recover. Now, a lot of this is alternative history stuff, but incredibly well researched. I can’t imagine the kind of stuff Kowall had to learn to write this book. It’s just damn impressive right there. Now, this is the 1950’s, and true to the times, we’ve got a front row seat as we see how women were treated, how medical and mental issues were handled, how people act in a crisis when things like race, religion, and sex are so incredibly important.

It’s not complicated. I mean, it really isn’t. It’s uncomfortable. It naturally upsets me and gets my hackles up. I hate the discrimination, but this sort of thing isn’t complicated. We, people, complicate it, but sexism, racism – insert any ‘ism’ here – really isn’t that hard to understand. It makes life hard, though, and throws wrenches in situations, and works against people and societies. Throwing a dynamic like this into an already hard situation worked incredibly well as an exploratory device here.

This book is a fast read. It isn’t incredibly long, but more than that, the story is gripping and the narrator’s voice is incredible. The situation we’re thrown into is tragic, and incredibly emotional, but Kowall takes us through it almost effortlessly, and with great poise. Now, I will say that this book isn’t comfortable. In fact, it’s quite uncomfortable in parts. Kowall is shining a light on some of the uglier parts of our culture and society, and she does it quite realistically, but this is also one of those cases where I think that being uncomfortable is important, and examining our truths, is likewise important.

The Calculating Stars was amazing. Every bit of this book was polished. Every word mattered. Every sentence flowed. Each character was as real as my neighbor. This book instantly sucked me in, and kept me hooked to the last page. Emotional, visceral, and important, The Calculating Stars will be on every award shortlist next year, or I’m not really a human.