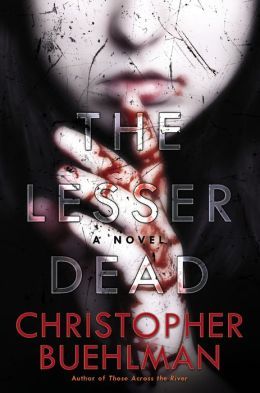 The secret is, vampires are real and I am one.

The secret is, I’m stealing from you what is most truly yours and I’m not sorry—

New York City in 1978 is a dirty, dangerous place to live. And die. Joey Peacock knows this as well as anybody—he has spent the last forty years as an adolescent vampire, perfecting the routine he now enjoys: womanizing in punk clubs and discotheques, feeding by night, and sleeping by day with others of his kind in the macabre labyrinth under the city’s sidewalks.

The subways are his playground and his highway, shuttling him throughout Manhattan to bleed the unsuspecting in the Sheep Meadow of Central Park or in the backseats of Checker cabs, or even those in their own apartments who are too hypnotized by sitcoms to notice him opening their windows. It’s almost too easy.

Until one night he sees them hunting on his beloved subway. The children with the merry eyes. Vampires, like him…or not like him. Whatever they are, whatever their appearance means, the undead in the tunnels of Manhattan are not as safe as they once were.

And neither are the rest of us.

This audiobook was a library loan. Yay libraries!

Two things to know before you go any further. 1) I don’t really enjoy horror that much. 2) I am so sick of vampires I’d rather eat an entire buffet of cockroaches than read a book about them. So, when someone said I absolutely had to listen to The Lesser Dead, I was skeptical, but game. I didn’t expect to last, but I was pretty glued to it for a few days there.

First of all, the author narrates this book and friends, he does an absolutely incredible job, to the point where this narration has to be one of my top five favorites ever. He just nails it. I love when authors read their own books, because they just get the nuances that other narrators might miss. However, not every author is a good narrator. I’m sure I would have really enjoyed this book if I read it, but to my friend who said I had to actually listen to it, thank you, because I’m pretty sure that made this book that much better.

The Lesser Dead tells the story of one Joey Peacock, who was turned into a vampire at the age of fourteen. He takes up with a group of vampires who live in the abandoned tunnels under New York City. He has a mother figure, an Irish woman with a temper, and a friend/confidant/father figure, a scholarly Eastern European, and a few other characters who pepper the narrative. When this book takes place, Joey is actually in his fifties, while he still looks fourteen. He’s fallen into a bit of a routine, and even has a family (father, mother, son) that he feeds from regularly.

Joey is a rather cocksure man, who seems to really have a high opinion of himself, and his skills. He is a bit of a coward, and is really into the latest trends and styles. He can charm his way into just about anywhere, and seems rather nonplussed by almost everything. In a lot of ways, while he’s actually in his fifties, being turned at fourteen has kind of kept him as a fourteen-year-old. It’s obvious that he loves his life, and the first half of this novel is really establishing who he is, how he lives, and all the nuances of his character.

I will say that by and large, Joey comes off as a sort of carefree guy, but there’s a dark edge to him. He’s stuck in a teenager’s body, living a teenager’s life, dispossessed in the city he’s always considered home, never quite fitting in here or there. There are moments that he sort of glosses over, where you can see he’s trying to connect with people, with someone, anyone, and it just doesn’t work time and time again. It’s actually quite tragic, and the fact that the tragedy is understated, more poked at than outright discussed, makes it all the more depressing.

In the second half of the book, we are introduced to a gaggle of vampire children. It’s obvious that something is off about them, but it takes some time for it all to get pieced together, and when it does, shit truly does hit the fan. That’s when the “horror” part of the novel really falls into place.

I will admit that I thought the way the children were used in the story was kind of cliched. I guess I am kind of tired of creepy kids. That being said, I really was surprised by just how they were used, and how they changed the plot. Furthermore, the resolution of the situation and the book itself was really well done, and not what I expected at all. The surprise of the ending really boosted the book, and it fit the tone of the narrative quite well while making me kind of wonder how I didn’t catch that surprise sooner.

The writing was fantastic. This book is set in the late 1970’s, and while I wasn’t alive then, I enjoyed the details, like phone booths, and writing actual letters that are sent in the mail, and a mention of the huge boat-like cars that were driven a lot in those days. It really brought the time period to life. Furthermore, Joey has lived through a lot. He saw World War II. His mother was Jewish, so that heritage impacts him in some surprising ways that he touches on in the book. He talks a bit about the crackdown on gas in the 70’s. He discusses how fashions and trends have changed, mentions television shows that were popular back then, discusses some of the worries people had about the increasing television culture, and more. It’s interesting. I loved the time and place feel of the book. This story could have honestly been set in almost any time period, but this made it unique, and interesting, and very, very real.

So, The Lesser Dead was a book I was determined to hate, and I really ended up loving it. The audio narration was fantastic, and the story itself was fast moving, gripping, and dark with tons and tons of little details that I just adored. If you’re into dark, modern reads, vampires with a twist, or horror in general, this is a book you really don’t want to miss. I’ve never read any of Buehlman’s other books, but I intend to check some out now, especially if he narrates them.