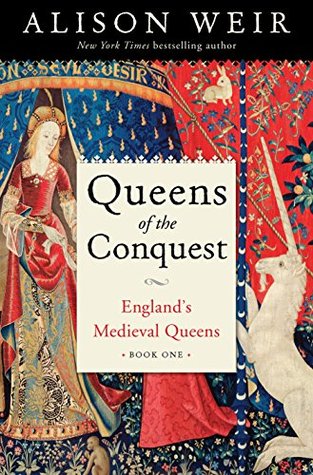 The story of England’s medieval queens is vivid and stirring, packed with tragedy, high drama and even comedy. It is a chronicle of love, murder, war and betrayal, filled with passion, intrigue and sorrow, peopled by a cast of heroines, villains, stateswomen and lovers. In the first volume of this epic new series, Alison Weir strips away centuries of romantic mythology and prejudice to reveal the lives of England’s queens in the century after the Norman Conquest.

Beginning with Matilda of Flanders, who supported William the Conqueror in his invasion of England in 1066, and culminating in the turbulent life of the Empress Maud, who claimed to be queen of England in her own right and fought a bitter war to that end, the five Norman queens emerge as hugely influential figures and fascinating characters.

Much more than a series of individual biographies, Queens of the Conquest is a seamless tale of interconnected lives and a rich portrait of English history in a time of flux. In Alison Weir’s hands these five extraordinary women reclaim their rightful roles at the centre of English history.

This book was an ARC sent by the publisher in exchange for an honest review.

I tend to read a lot of nonfiction when I edit. There are a few reasons for this. First, I don’t want to cross streams – get the book I’m editing mixed up with the book I’m reading. Since I absolutely do not ever edit nonfiction, that’s not a risk with these books. Secondly, I have to read a book all the time. If I don’t have at least three books going on the side of whatever project I’m working on, then you know something is very, very wrong.

So, I’m in the middle of two editing projects right now, and as a result, I’m reading a whole ton of nonfiction books.

I’m a sucker for this time period. There isn’t much that is really known about it. There wasn’t a whole ton of writing. It was a thousand years ago, so what has survived has, inevitably, been ravaged by time. There are a lot of holes in what we know, and a lot of places for historians to poke at, and guess about. However, the mystery of it really is probably what attracts me to it so much. Now, Alison Weir (mainly, not always) writes about English queens, and that’s just even more interesting to me. Women were so overlooked, but so often they had to be the backbone, and use creative measures to influence events, and their subtle, yet powerful touch is seen all over the pages of history.

The idea of Norman queens, those women from the 1000’s are so overlooked, mostly just pious figureheads that got married at twelve, popped out babies, and prayed diligently while their husbands did all the busy work are so unknown they are just names rather than people. When the publisher confronted me with this book and asked if I wanted to read and review it, I basically started foaming at the mouth. ARE YOU KIDDING ME? ALISON WEIR IS ATTACKING NORMAN QUEENS? HELLLLLLLLLLLLLL YES.

This book covers a few queens, focusing on Matilda of Flanders of the Bayeux Tapestry fame, Matilda of Scotland, Adeliza of Louvain, Matilda of Boulogne, and the Empress Maud. A book like this, divided between queens, was a good choice for Weir. There isn’t a whole lot for historians to chew on, and there’s a lot of guessing, a lot of filling in the gaps with potentials based on what little evidence she has found. The way this book is broken down gives readers a meaty chunk of each woman’s life, an overview of the important details, and a feel for how they touched history and altered events current to their time while staying away from getting bogged down in too many details or too many suppositions.

One reason I love reading Weir’s books is that they are just incredibly readable. She’s telling a story as much as educating her readers, and I love that about her. She has a great knack for boiling down complex events and making them easy to digest. She also has a skill with keeping the narrative flowing, and interesting, when other authors would get bogged down in certain points and sort of meander there a while. Weir’s books always move forward, no matter what, and she builds up each subsequent event with the nicely informed, easily understood events that came before.

Readers who enjoy deep dives will probably love this book while finding some issues with it. First, as I said above, there really isn’t much known about women at this time period, and while queens have better documentation, it’s still nowhere near as much as could be found about their husbands. That means that there are a lot of holes, and a lot of places where Weir gives suggestions of what could have happened, based on the cultural norms of the time, available evidence, stories that had been related and recorded at the time and things like that. She’s clear about when she’s doing this, but to be honest, it’s unavoidable with these women, and I think Weir does a great job with informed guessing, letting her readers know she’s doing that, giving a few options, and telling readers which one she leans towards and why.

That being said, if you’re a nonfiction reader who likes to know the whys and hows of things and all those tiny details, you won’t really find it here.

Secondly, this book does cover more than one queen, which means more than one generation. It spans a couple hundred years and numerous influential women. You don’t really get deep-dives here, more like educated, deep-enough overviews. You’ll learn something, but you won’t come away from it knowing what color Maud’s underwear is if that makes sense.

So, this leaves us with my summary.

Alison Weir is always a hit for me with her nonfiction work. I am a devout reader of hers. I was absolutely tickled when I learned she was writing this book and I’d get to review it. It’s so good. She crafts interesting, intricate stories of these important women’s lives, and makes them seem like so much more than a name and placeholder in history. I love her accessible style, her easy way of breaking down topics and boiling down complex situations. Queens of the Conquest was some of her most gripping work, and her most readable. This would be an important read for anyone interested in these women or this period of history.