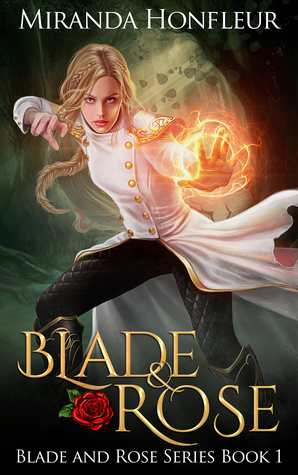 A kingdom in turmoil or the love of her life. Which one will she save?

Elementalist Rielle hasn’t heard from her best friend in far too long. Yet no one at the Tower of Magic seems to care about Olivia’s silence, or the curtain of secrecy surrounding the distant capital. Before Rielle can investigate, she’s assigned a strange new mission: escort a paladin named Jon across the kingdom.

When whispers reveal mercenaries have killed the king, taken the capital, and that no one is coming to help, Rielle can’t leave Olivia in peril. But as infamous mages and deadly assassins hunt Jon, she can’t leave him unprotected either—especially as she finds herself falling for his strength, his passion, and his uncompromising goodness. Her past returns to haunt her, a werewolf stalks their steps, and an ancient evil is gathering, yet the restraints forbidding their love strain and snap one by one.

Saving Olivia and the kingdom means defying orders and sacrificing her every ambition, and could mean losing the man who’s become so much more to her than a mission. Which will she choose: her best friend and the kingdom, or the love of her life?

Dive into a medieval world sensual and dark, full of magic and greed, love and blades, where factions vie for influence and there are no easy choices.

First things first, this book clocks in at 650 pages, which is pretty long. Now, depending on the audience, this could be a good or bad thing. I mean, the general rule of thumb is, if you don’t like the book you’re reading, 650 pages will feel like a slog through eternity. However, if you dig the book, 650 pages will feel like nothing. The other thing you may want to be aware of is that there’s a bit of a cliffhanger ending, so beware of that. If you dig this book, then you’ll want to buy the second one right away.

Now, 650 pages is a bit long, and I did feel like some bits of this book could have been streamlined, cut down, narrowed, and focused a bit more, thereby decreasing the overall size of the thing. Some of these scenes felt a bit repetitive, and filler. It had the overall effect of making the book feel like it had really good forward momentum, and then it just sort of got bogged down and lingered a bit too long in places before it recovered itself and started moving along again. However, this really wasn’t a deal breaker for me. It’s just something I was aware of as I read.

Blade & Rose isn’t quite a young adult, but it isn’t quite a full-blown adult either. Maybe I’d place this as a crossover between the genres. It’s good for the older YA group and into the adult group. Some of the characters felt nice and grown up with life experience and all that behind them, but others never quite moved past feeling like teenagers caught up in emotions too strong for them to really handle.

The plot is divided between romance and relationships, and political intrigue. I say divided, but there were parts of the book where it felt almost entirely reliant upon relationships and romance, with plenty of angst and a kind of love triangle and things of that nature. Again, not a deal breaker, but if you aren’t into romantic fantasy, you might want to overlook this one. While there is a lot of other elements here, I did overwhelmingly feel like romance might be where the bulk of this book rests.

That being said, there’s a lot going on here, and a lot being established, from an interesting magic system, to a world steeped in history and conflict, to people with divided, confusing loyalties and the interesting relationships that form when people from opposing sides and with opposing viewpoints are thrust together in tense situations.

The writing was really wonderful. I felt like Honfleur (awesome last name, by the way) was instantly comfortable with the story she was telling. There was no real warming up period, she just knew what she was doing and she owned it and I absolutely loved that about this book. That being said, I felt like things started strong and then kind of tapered off around the halfway point. Some characters got stuck in emotional ruts and never quite developed past that point. I felt like Rielle was maybe being pulled in too many directions and it wasn’t quite realistic. There were those filler parts I mentioned above, and the insta-love didn’t completely work for me.

That being said, this book was quite a ride, a huge adventure, and a lot of moving parts. The magic system was interesting, the plot was layered and complex, and the writing was wonderful. If there were some flaws in the book, they were easily overlooked in favor of the interesting, character-driven plot. This is a solid start to a series that will likely find plenty of fans amongst those who enjoy romantic fantasy. In fact, I was just editing a romantic fantasy book for an author who is quite well known among romantic fantasy readers, and I thought of this very book and realized that the two fanbases would probably intersect quite nicely.

Is it perfect? No, but nothing is. What Blade & Rose is, is one hell of a strong start to a series I’m personally interested in continuing with.