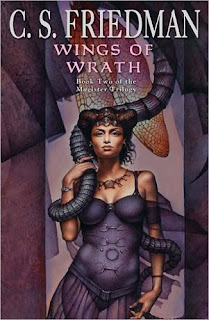 Friedman delivers a rushed second installment of the Magister Trilogy (after 2008’sFeast of Souls), set in a casually grim world where cloak-and-dagger political intrigue is necessary for survival. Kamala, witch turned immortal Magister, flees north to the barrier called the Wrath of the Gods in a desperate attempt to uncover the truth about how the mysterious Souleaters were once defeated. What she learns soon leads her to a dire prophecy that paves the way to war. Heroes and villains (if such terms make sense in this morally gray world) struggle with difficult and often sinister decisions, and while strong female characters dominate, male characters remain underdeveloped. Beautifully written but too short, this volume falls victim to overly simplistic plotting, and many unresolved questions await book three. (Feb.).

I established in my last post that I am a complete Friedman fan-girl, but this doesn’t mean her work is flawless. This second book in the Magister Trilogy seems to suffer from what I consider “second-book syndrome.” While Friedman’s writing is, as always, flawless, I felt that this book lacked the depth, darkness and tightly woven plot that the first book had. It failed to grip me quite as much as Feast of Souls and didn’t leave me with the breathless, edge of my seat feeling the first book left me with.

One of the things about the first book that gripped me the most was the world building. Friedman really established herself as a master world-builder in Feast of Souls and that truly gripped me. She sucked me into her world, her creation and set out rules and laws of behavior so foreign to me I couldn’t help but be interested. She created a world of gray rather than blacks and whites which forced me, as a reader, to wonder how her vision applied to my daily life. I loved it.

I was expecting more of that in Wings of Wrath and it just didn’t deliver the punch that the first book delivered. It almost seemed to me that she forgot the world building and focused on plot solely. Her world really didn’t develop much, and neither did her characters. Her plot wasn’t as tightly woven. Much of it I felt was almost completely predictable.

Due to the point I just mentioned I felt that this book lacked a lot of the “dark” quality which seems to be Friedman’s halmark. Her anti-heroes didn’t seem quite as anti. A few of them became almost secondary characters, which bothered me, as she spent so much time developing them in the first book. This book became more plot driven, rather than caracter driven and that kind of disappointed me as I believe Friedman’s characters are one of the things that makes her stand out in the genre.

I will say that Friedman’s writing can’t help but suck the reader in. Her descriptive quality never wavered. She is so talented in that aspect that I can’t help but get sucked into her reality and feel that it is my own. Despite the fact that I complained that this book isn’t as dark as her previous one, it still is dark and filled with lush depth that I don’t get from very many authors. Wings of Wrath did have some significant developments and left enough strands of the plot untied to set up the third and last installment of the series (whenever it gets published) to be a mind-blowing reading experience. I absolutely cannot wait to see what happens next and how a lot of the character developments turn out.

I just hope it gets published soon. I will go insane wondering what is going to happen next!

I know this review must seem kind of harsh, but I do want to say that I completely and absolutely recommend this book as it is in one of the most interesting series out there. I don’t think it quite met Friedman’s standard, but it is still excellent and a book I will highly, highly recommend to anyone who is interested in an engrossing read. It is not a stand alone book, however. It is necessary to read the first book in the series to understand what is happening in this work.