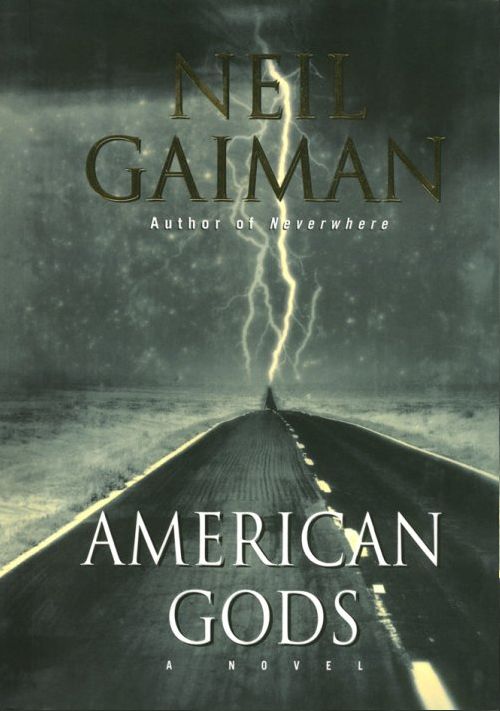 Titans clash, but with more fuss than fury in this fantasy demi-epic from the author of Neverwhere. The intriguing premise of Gaiman’s tale is that the gods of European yore, who came to North America with their immigrant believers, are squaring off for a rumble with new indigenous deities: “gods of credit card and freeway, of Internet and telephone, of radio and hospital and television, gods of plastic and of beeper and of neon.” They all walk around in mufti, disguised as ordinary people, which causes no end of trouble for 32-year-old protagonist Shadow Moon, who can’t turn around without bumping into a minor divinity. Released from prison the day after his beloved wife dies in a car accident, Shadow takes a job as emissary for Mr. Wednesday, avatar of the Norse god Grimnir, unaware that his boss’s recruiting trip across the American heartland will subject him to repeat visits from the reanimated corpse of his dead wife and brutal roughing up by the goons of Wednesday’s adversary, Mr. World. At last Shadow must reevaluate his own deeply held beliefs in order to determine his crucial role in the final showdown. Gaiman tries to keep the magical and the mundane evenly balanced, but he is clearly more interested in the activities of his human protagonists: Shadow’s poignant personal moments and the tale’s affectionate slices of smalltown life are much better developed than the aimless plot, which bounces Shadow from one episodic encounter to another in a design only the gods seem to know. Mere mortal readers will enjoy the tale’s wit, but puzzle over its strained mythopoeia.


Gaiman’s book, “American Gods,” made quite a splash on the market when it first came out. The reviews for it are astoundingly good on Amazon and the other book websites people tend to frequent.
This book has a meandering plot which, at times, seems to go nearly nowhere, fast. Shadow, the protagonist, seems to travel from one odd situation to the next continuously. I’m not sure if all readers feel this way, but I didn’t completely understand what the exact conflict was until after I reached the halfway point of the book. While this may bother some people, it didn’t bother me. It’s one of the main reasons I think this book is more about introspection and thought rather than an action driven plot.
Gaimon’s prose are, well, phenomenal. He is a true wordsmith who has an amazing gift for turning language into an art form. Some of his descriptions and dialogue will stick with me for quite a while. Descriptions like “Chicago happed slowly, like a migraine,” might not seem like much to the average reader, but to me it is subtly brilliant. A whole book filled with subtly brilliant descriptions makes Gaiman’s world pop and come to life. I felt immersed in Shadow’s reality until, at times, it was hard to tell were Shadow stopped and I began. Odd, I know, but that’s what an author tries to do and in my opinion, that is the highest compliment for a writer.
The reviews online for this book aren’t flawless, and those who complain are well justified in their complaints. The reasons are valid, and they are the very things keeping me from giving this a five out of five star review. The plot does meander quite a bit. Shadow seems to go from situation to situation, much like a drifter, without any real aim or goal. This is intentional, but at times it got a little stale. He becomes attached to Mr. Wednesday, but I can never really figure out why. Another common complaint is that this book is all description and philosophical discussion without any real action. Even the “storm” isn’t really climactic.
They are right. This book is about a road trip, growth and realization. It’s a “coming-of-age” in the sense that Shadow spends much of the book learning more about the world around him and how he fits into it. In my opinion, this book is more about layers and symbolism than anything else. And yes, that does bother some people. Others may find this book “boring” due to the philosophical discussions and rambling plot. Gaiman is trying to say something and a lot of it is buried so deeply it may take two or three readings before I feel fully comfortable that I completely grasp everything being said both in dialogue and otherwise. This book is very philosophical. A review online said, in essence, that this book is more about analyzing Americana than anything else. I’m not sure I completely agree with them, but there is a fair amount of that in this book.
Shadow is a very well developed character, so well developed, in fact, that I felt that the world and other characters at times paled in contrast to Shadow’s vibrantly painted hues. However, Gaiman’s writing remains flawless throughout even if his plot does ramble and he may wax overly philosophical at times. This book is a recommended read for anyone who enjoys thought provoking books that are more about introspection and analyization rather than fast paced plots and careening cover-to-cover action. English 1010 junkies who enjoy picking apart books and poetry for deeper meanings will take to this like a moth to the flame. Series readers beware: this is a stand-alone book.
4/5 stars.