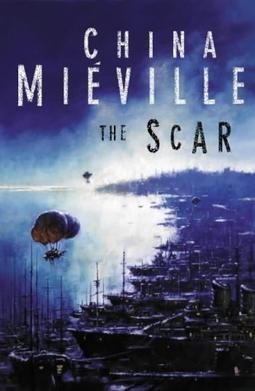 In this stand-alone novel set in the same monster-haunted universe as last year’s much-praised Perdido Street Station, British author Mieville, one of the most talented new writers in the field, takes us on a gripping hunt to capture a magical sea-creature so large that it could snack on Moby Dick, and that’s just for starters. Armada, a floating city made up of the hulls of thousands of captured vessels, travels slowly across the world of Bas-Lag, sending out its pirate ships to prey on the unwary, gradually assembling the supplies and captive personnel it needs to create a stupendous work of dark magic. Bellis Coldwine, an embittered, lonely woman, exiled from the great city of New Crobuzon, is merely one of a host of people accidentally trapped in Armada’s far-flung net, but she soon finds herself playing a vital role in the byzantine plans of the city’s half-mad rulers. The author creates a marvelously detailed floating civilization filled with dark, eccentric characters worthy of Mervyn Peake or Charles Dickens, including the aptly named Coldwine, a translator who has devoted much of her life to dead languages; Uther Doul, the superhuman soldier/scholar who refuses to do anything more than follow orders; and Silas Fennec, the secret agent whose perverse magic has made him something more and less than human. Together they sail through treacherous, magic-ridden seas, on a quest for the Scar, a place where reality mutates and all things become possible.

I’ve never read Mieville before. I’ve heard so much good stuff about him that I knew I had to give him a try. A friend of mine told me that this book was a good place to start with Mieville’s work. After reading this book and reading some other reviews out there I wonder if I should have actually started with Perdido Street Station rather than this book. I felt, at times, like I had less information about Mieville’s world than I should have had if I had read another book of his first.
Mieville’s world is not the standard fantasy world. It is much different than anything that I’ve read before. Bas-Lag (Mieville’s world) holds no resemblance to the popular fantasy worlds out there, which had to be a purposeful effort on his part. There is nothing magically medieval about this book. It was a twist from the normal, a purposeful meandering from cut fantasy paths merging with flying machines, mosquito and cacti people, steam engines and anything else you can imagine (or not). In Mieville’s world, magic and science coexist often working together toward the same goal and aim and seeing how that has shaped Bas-Lag was incredibly interesting to me. It seems that many fantasy books have a sort of perpetual war between magic and science. Seeing how Mieville managed to create a beautifully sculpted world which embraced both science and magic was not only interesting, but refreshing step away from prefabricated norms many authors seem to embrace.
Armada, the floating pirate city, is unlike anything I have ever read before, easily the most unique city I have ever read about in this genre. Armada is a one thousand year old piecemeal city woven together from rescued and captive ships. The city floats on the oceans, staying far enough away and out of reach that, to most people, it is just a rumor of a place, if they have heard of it at all. And the pirates that Mieville writes about aren’t like most scurvy, eye-patched creations you’d imagine. Everyone has a story, a reason for being there and creating that hodge-podge floating cultural oasis of the seas.
Mieville’s characterization is flawless. The main protagonist, Bellis, is a character I loved and hated at the same time. She is incredibly well developed. Mieville really took the time with his characters to insure that they where multi-faceted and understandable. Bellis, a depressing woman who seemed prone to boughts of brooding, would have been hard for many authors to master without making the book seem overly dark and depressing. She is not the protagonist many would have chosen to read about, or write about, but Mieville took on this difficult task and made it his own with cunning mastery.
Mieville took the time to fully develop his secondary characters, as well, insuring that each character held a light of their own and a unique story to draw the reader to them. It was an impressive feat to insure that everywhere the readers attention was directed, an interesting, unique and understandable character was there to embrace said attention. The effort he took to insure each character had their own stories, motivation and points of view really makes this work multidimensional, and pop more than his unique world had already managed.
This book is thought provoking, not only because of the plot but also because it made me wonder about the state of fantasy today. I wonder why more authors don’t step away from normal genre restrictions and create something entirely new, unique and different like Mieville managed. While I do not think Adrian Tchaikovsky’s Shadows of the Apt series is on the same caliber as Mieville’s The Scar, one of the things that is making both of these books (series) such a huge success is their blatant disregard for the Tolkanesque world that has been developed over and over again. While that world will always have a place in my heart, this derailing from the standard course of fantasy is incredibly refreshing.
Mieville’s world is new, different and stimulating only improved upon by his incredible writing and flawless characterization. This book was a quick, engrossing read which forced me to turn pages late into the night. I am eager to embark on his Perdido Street Station book next. I cannot imagine it being anything but a breath of fresh air in a genre laden with medieval worlds, sorcerers and good men who conquer all.
This book won’t appeal to everyone. The plot is slow to develop, there is more description and thought than actual dialogue and there really isn’t any wham-bam action that you’ll find peppered throughout other books, making many individuals feel as though the book is uneventful with a dragging plot. People who aren’t fans of dark fantasy should also steer clear. Also, this is a stand-alone work. From what I gather, this book and Perdido Street Station take place in the same world, albeit different individuals and different scenarios in each, so series readers be ware.
5/5 Stars