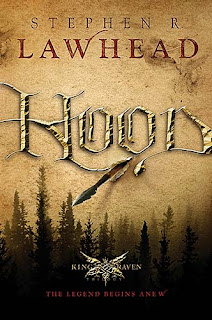 Lawhead (Byzantium), known for his historical and fantasy fiction, reimagines the tale of Robin Hood in his latest novel, the first in the King Raven Trilogy. Based on detailed research, Lawhead places the folk hero (whom he names Bran) in Wales in 1093, at a time when the land was under constant assault from the new Norman rulers of England. When Bran’s father, the king, is killed in an ambush along with nearly all his warriors, the land of Elfael is overtaken and its citizens subjected to great oppression. Though Bran should be king, he has lost faith (in both himself and whatever God he once knew) and decides to flee instead. Through agony and adventure, aided by a ragtag group of colorful characters, his sense of justice grows, along with his commitment to leading the people of Elfael and his creative strategies for dealing with the enemy. Lawhead examines questions of faith from both sides of the conflict, so readers see Welsh monks praying for deliverance and Norman rulers asserting their divine right to the land. The story’s tone is uneven—by turns sweet, violent, and funny—and it gets a bit bogged down in the middle, but overall it’s a fun read that will leave readers anxious for the next installment.

I admitted in a previous entry that I am a complete junky for all things Celtic. I just love the mythology, the stories, and the artwork. Thus, it was only a matter of time until I fell upon Hood by Stephen Lawhead.
Lawhead breaths a new life into the story of Robin Hood, twisting the tale and turning it into something new, reformed and revised. Bran, a prince of Elfael, a kingdom in Whales, goes quickly from a young man who has it all, to a young man who had it all savagely ripped from him. This quickly turns the story from that of a gilded prince to a young man trying to find out who he is and how he will regain all that he had lost, a true coming-of-age tale.
Lawhead does a remarkable job at making myths come to life and giving a fresh and authentic background to a story so many have heard since their childhood. Robin Hood is a dispossessed man fighting the English for his country and his people; a man reduced to nothing. Yet even in this tale of loss and struggle Lawhead has managed to paint the characters in a refreshing gray light.
Bran is a man you will learn to love and hate. He has it all, he’s cocksure, selfish and often time’s thinks no further than himself and his own comfort. Lawhead manages to thrust Bran into situations that force him to grow and change, yet throughout these changes, Bran still remains uniquely Bran, never losing sight of the man the reader is introduced to at the beginning of the book. Bran has to learn to grow into an adult and face a menace much larger than anything he’d ever dreamed of. He does this with a motley crew of fellows adding color and ardor to Lawhead’s brilliantly woven world. Along with Bran we have a conniving monk, an old hag, an unsure noble woman, noble men who are in over their heads and more. Every character has their own faults, flaws and strengths and each add a wonderful thread to the tapestry of this tale. Each character finds their way into the book in their own time, thus, this tale is told from multiple perspectives and, often times, different locations.
Lawhead steeps his book in religion and myth, which may be a problem to some, but he doesn’t hit the reader over the head with it. Instead he makes it part of his world, offering it as a cultural backdrop, which I felt actually added depth to the book more than anything else. He also fills the novel with beliefs and practices people may have taken part of at the time to ward off beings like monsters that haunted the woods or any number of other nasties that we never seem to think about in this day and age. This causes me to remember that this book takes place at a time when sea monsters were considered real dangers for oceanic travelers. It was a different world, and the superstitions Lawhead highlighted just made it all the more real in my view.
It’s obvious that Lawhead did his research for this stunning novel and it’s just as obvious that Lawhead is a practiced, talented author. His writing is wonderful; often his description brought his world into vibrant life and color. He never falls into the rut of telling the reader what is happening, instead he shows the reader what is happening, brings the reader to the level of the characters and shows them both sides of the conflict.
The plot does drag a bit in the middle of the book. I did find myself wondering when things would progress and while the scene (which I won’t mention here) does have importance to the overall story, I feel as though it could have been cut shorter and actually been an advantage to the overall flow of the book. This seems to be a fairly general consensus among the reviews I have read thus far online.
All in all, I found this to be an enjoyable read. I was pleasantly surprised by Lawhead’s research and his ability to breath new life into an old tale. I enjoyed how Bran actually had a history, a reason to turn into what he became. He was a real person as Lawhead presented him. He didn’t start out a hero and in many ways he didn’t end a hero, either. The deliberate derailing from the hero-worship often presented in Robin Hood stories was nothing short of stimulating. While the plot did drag a bit toward the middle, it quickly picked up pace. I found myself sympathizing with all characters and wrapped in their stories, their lives and their culture, which is so foreign to my own.
Lawhead truly accomplished an astounding feat by making an age-old story come to life in such a unique and vibrant way. For any historical fiction/historical fantasy fans, I highly recommend this series.
4/5 stars