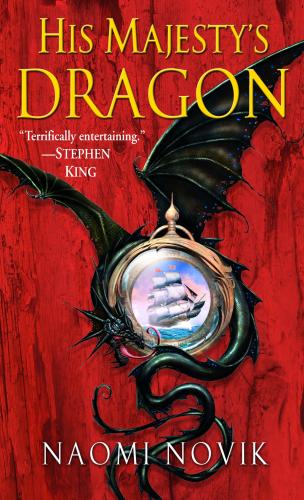 
In this delightful first novel, the opening salvo of a trilogy, Novik seamlessly blends fantasy into the history of the Napoleonic wars. Here be dragons, beasts that can speak and reason, bred for strength and speed and used for aerial support in battle. Each nation has its own breeds, but none are so jealously guarded as the mysterious dragons of China. Veteran Capt. Will Laurence of the British Navy is therefore taken aback after his crew captures an egg from a French ship and it hatches a Chinese dragon, which Laurence names Temeraire. When Temeraire bonds with the captain, the two leave the navy to sign on with His Majesty’s sadly understaffed Aerial Corps, which takes on the French in sprawling, detailed battles that Novik renders with admirable attention to 19th-century military tactics. Though the dragons they encounter are often more fully fleshed-out than the stereotypical human characters, the author’s palpable love for her subject and a story rich with international, interpersonal and internal struggles more than compensate.

I don’t honestly know why I am reviewing this book. I feel like I am the last person on the planet to read it so everything that needs to be said has already been said on the matter. That being said, I’ll review it anyway.
It takes a lot to impress me with dragons, especially since the fantasy genre seems to be flooded with them (though I will say in recent years more and more authors seem to be taking a detour from traditional fantasy creatures like dragons). However, Novik has a brand new spin on the creatures, involving them in the Napoleonic wars as the air force of the time. While this is, by no means, genre-bending work, it does have instant appeal to fantasy readers. There aren’t any magicians, or lost worlds in this book. The dragons are the fantasy element. They are what attracts the reader and provides sufficient fodder for an entire series.
Novik had to do a lot of research to make the novel come to life. Her new spin on an old war was refreshing, creative and incredibly well done. She was able to wrap readers in a recognizable story but keep the setting just foreign enough to entrance fantasy lovers who enjoy reading about the new and unusual. The story thrives on its background and Novik did an incredible job with her research, bringing this new history to life.
The series has earned a lot of hype and discussion since it has progressed and while I feel that Novik deserves it, I do not feel as though this book isn’t without flaws. While Novik’s world pops and her research is exemplary, her characterization is lacking.
Temeraire keeps his innocent, exploratory voice throughout the book. The sections with him were a joy to read and often made me smile as I pictured this hulking creature philosophizing or investigating the world around him. Novik did add the perfect amount of humor to her otherwise exploratory, coming of age and war ridden tale. Laurence, however, seemed to lack where Temeraire flew. I found Laurence to be overly dry and, at times, almost detached from the action happening around him. While he was appealing and easy to relate to during his scenes with Temeraire, I felt Novik fell into traditional writing pits by making Laurence a bit too perfect, a bit too dry and lacking a bit of depth. In general, I found most of Novik’s human characters to be hauntingly stereotypical and lacking colorful development.
This book seems to be less about conflict and more about growth, development and change. Novik does an incredible job showing Laurence adjust to his new life and Temeraire hatching and exploring his own childhood (or whatever the dragon equivalent is). It’s easy to fall into the tale and if the writing does get a bit clumpy and the dialogue a little too stiff at times and the plot a tad predictable, it’s easy to overlook.
Temeraire does steal every scene he’s in (I read the book for him and the other dragons, not for Laurence). The book thrives on him, making all the other characters seem almost pale in color in comparison. Novik truly is at her best during her scenes with Temeraire. Laurence takes quite a bit longer to warm up to, but by the end of the book the reader will feel attached to him as well. The book would have benefitted from a subtler tale, and a more realistic, relatable Laurence.
This is Novik’s debut work, and it is impressive for that. She has gained a huge fan following for this series and it is well deserved. Her story is incredibly easy to be lost in. I would not consider this epic, or genre-breaking but it is enjoyable and it’s easy to fall in love with the world and the dragons. Novik has a unique voice and a real talent for telling a good tale. Readers in the mood for something more serious should steer clear of this book. While it is a wonderful tale and a work Novik should be incredibly proud of, it’s not epic nor serious but more of a tale you’d read if you want to escape from reality for a bit.
It’s obvious that Novik is using most of this work to set the stage for further books by introducing the world and creating characters that the reader will learn to enjoy, realate to and care about. For the reader wanting light, pure fun, His Majesty’s Dragon is a good choice. This book is a page-turner and will leave readers scrambling for the next book in the series.
3.5/5 stars