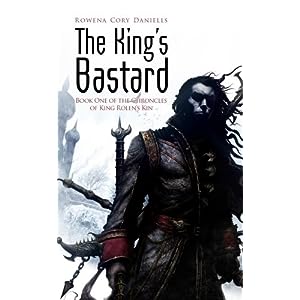 About the Book
Only seven minutes younger than Rolencia’s heir, Byren has never hungered for the throne. He laughs when a seer predicts that he will kill his twin. But the royal heir resents Byren’s growing popularity. Across the land the untamed magic of the gods wells up out of the earth’s heart. It sends exotic creatures to stalk the wintry nights and it twists men’s minds, granting them terrible visions. Those so touched are sent to the Abbey to control their gift, or die. At King Rolen’s court enemies plot to take his throne, even as secrets within his own household threaten to tear his family apart.
I was really excited to read The King’s Bastard and now that I’ve finished it I find myself both pleased and a little disappointed.
There isn’t much that’s amazingly new in this book. It has all of the traditional political elements that I’ve read about numerous times; the older inheriting brother is jealous of the younger brother. Added in to the mix are plotting relatives and friends set to destabilize the throne as well as plenty of secrets. While the plot isn’t amazingly unique, Daniells’ world is. I found myself enchanted by the animals she has created, everything from a unistag (which I take to be like a unicorn) to…well anything else you can dream up and if the magic system seems fairly stereotypical, the magical creatures definitely are not. However, she makes up for this conventional magical system by making it an important aspect of the plot in a very subtle way.
Daniells’ writing is not as fluid as I usually enjoy. Often times Daniells’ tells the reader conclusions they could come to on their own. I occasionally felt as though I was being given a list of things that happened rather than being brought through the events. This caused me to feel rather detached from the plot and the world, in general. I often felt that I was watching everything happen from a distant, uninvolved point. The detachment created by this style of writing really grated on me. The book could have spiraled easily into a four or five star read if Daniells’ had somehow managed to immerse the reader in events and let them come to their own conclusions rather than being told what is happening and what should be understood from those happenings.
Daniells’ exceeds at exploiting ignorance, prejudice and secrets. She is truly talented at steeping her plot in drama, dark happenings, betrayals, twisted love affairs and more without overburdening it with these elements. Nothing is safe in her book. This “nothing is sacred” feel really pushed the plot to a new level and added a layer of raw depth to her world which I found rather welcoming. If her characters and world did seem rather pale and washed out, and the dialogue was stilted at times, the pace of her plot and her exploitation of prejudice and ignorance to drive the book forward was incredibly refreshing.
Daniells’ has set up a very unique world with a plot that, if not the most unique out there, has enough aspects that are different enough to easily become incredibly attention grabbing in further books. While I don’t think this book is epic, I think Daniells’ should be pleased with her effort. The writing is choppy, the characters do lack depth and (in some cases) maturity, and I did get annoyed with how detached I felt from the plot. However, it is a solid effort and an easy page-turner. I plowed through half of the book in a matter of hours. The plot is relentless in its pace, never lagging, quickly making up for the slow start.
I should note that this series seems to be a series most readers ever love or hate. While this was a very average read for me, many readers out there absolutely love this series and laud its praises. Regardless of my take on it, enough people enjoy this book to prove that there is something here worth exploring.
3/5 stars