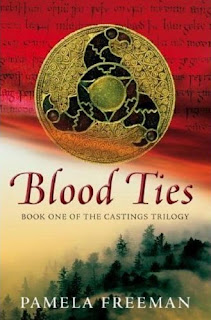 A thousand years ago, the Eleven Domains were invaded and the original inhabitants were driven onto the road as travelers, belonging nowhere, welcomed by no one.

Now the Domains are governed with an iron fist by the Warlords, but there are wilder elements in the landscape that cannot be controlled and that may prove the Warlords’ undoing. Some are spirits of place– of water and air and fire and earth. Some are greater than these. And some are human.

Bramble: A village girl whom no one living can tame, forced to flee her home for a crime she did not commit.

Ash: A safeguarder’s apprentice who must kill for an employer he cannot escape.

Saker: an enchanter who will not rest until the land is returned to his people.

As their three stories unfold, along with the stories of those whose lives they touch, it becomes clear that they are bound together in ways that not even a stonecaster could have foreseen – by their past, their future and their blood.

I have been really fortunate recently to have read a lot of books back to back that I have seriously enjoyed. This is no break in my stride, thankfully, though it makes me worried that when that bad one inevitably happens, it will happen in a big way. Oh well. I’ll cross that bridge when I get there.
I also have to divulge a mildly embarrassing detail. I didn’t read this book because I have heard about it before. I decided to read the book because I’m obsessed with Celtic knot work and the cover of the book has what looks to be a massive Celtic-looking triscal on it. Seriously, that’s the whole entire reason I picked it up. Thus, I don’t need to say that this book fits the bill for seriously under-hyped speculative fiction works.
While reading the first chunk of this book I discovered that Freeman was a well-known children’s author and I am pleased to say this book suffers from none of the hiccups I’d expect from a children’s author transitioning into writing adult works.
Blood Ties is a book basically focused on character and world development and Freeman does this in an incredible way. The book itself follows three main characters (while one purposefully remains rather mysterious and shadowy throughout the book thus remaining undeveloped compared to the other two). Between each character chapter there are short stories told in first person about a secondary character each main individual meets in their travels. I thought this would bother me, and it did take me about a fourth of the book to get the rhythm of Freeman’s story telling, but once the ah ha moment hit, I enjoyed the book immensely. I found that these stories were, sometimes, the most compelling parts of the whole book serving to enhance the world building and give the reader a more rounded feel for the affect people and politics can have on the lives of the literarily unimportant.
There were two side stories, which literally made me stop and gasp due to their emotional intensity, and dramatic impact on… well, you’ll have to read them to understand. They reminded me of those moments in The Reality Dysfunction where I had to stop, reread and absorb before continuing with the book to fully understand everything I read in those few short pages. The two stories are Doronit’s Story and Osyth’s Story, both of which serve to boldly point out that nothing is what it seems.
This book is focused on character and world building but it is also emotionally intense which may be a downside to some readers as it seems like the world building does seem to slack at times in favor of an emotional buildup. While the world is kept fairly small, I felt that Freeman’s overall story being told would have been lost in a larger world. It should also be noted that this isn’t an action driven book, but a character driven book in the extreme.
Another point many frequent readers of my blog will know is that I am not that attracted to black and white books. I like a gray tale and this book, by and large, fits that bill. There is no evil mastermind nor is there a poor farm boy who will rise up and conquer the world against all odds. In fact, after Blood Ties has been read I’m still not exactly sure what the main conflict the characters will face is, though that’s by no means a negative point. This book is about two warring ideologies (for lack of a better description) and Freeman is incredibly gifted at showing that there is both good and bad people on both sides of the line, as it were. While this is a big plus for me, some readers might get frustrated with no real clear “bad guy.”
This is a coming of age story, which I’m also never a big fan of, but it’s so much more. While some readers might pick up this book and put it down again thinking it’s slow paced, the readers willing to embrace the overall tale being told and really dive into the plots will probably really enjoy it. Freeman spends plenty of time showing each character grow and develop, and the lives they affect along the way.
Potential readers should be aware that this book is slightly dark, and it does mention rape which could bother some people (but it’s essential for character development and not incredibly explicit). Blood Ties is not action packed and it does take a little time to get used to the cadence of the whole thing, so readers might want to be aware of that before picking it up. It might not be for you, and that’s fine. Not every book can suit every person, and I would also like to mention that Liviu, in my comments, raises some very good points about the book that readers should be made aware of.
Blood Ties is a rich tapestry helped by a slightly subtle, but quietly unique magic system, plenty of lore, an incredible “spiritual” lake, richly woven history and very interesting, realistic cultures. This book is deep. It took about three-fourths of it to pass before I even understood the title. In that way, it holds true to it’s Celtic-like cover art. Celtic stories of old were always told in layers with the obvious events on the surface, the subtle events and then the meaningful events. Only those willing to probe past the obvious events of the tale were rewarded with the morals and meanings hidden below. Very much like Blood Ties.
5/5 stars