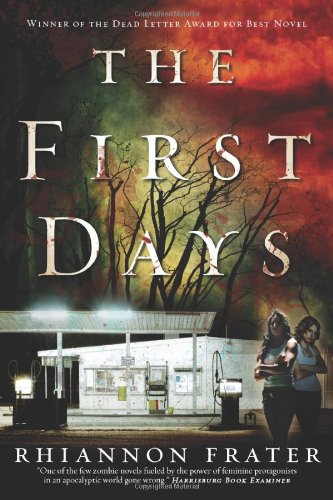 About the book
RhiannonFrater’s As the World Dies trilogy is an internet sensation. Thefirst two books, The First Days and Fighting to Survive, have won the Dead Letter Award for Best Novelfrom Mail Order Zombie. TheFirst Days was named one of the Best Zombie Books of theDecade by the Harrisburg BookExaminer. American Horror Blog calls Rhiannon Frater “a writer to watch.”
Themorning that the world ends, Katie is getting ready for court andhousewife Jenni is taking care of her family. Less than two hours later, theyare fleeing for their lives from a zombie horde.
Throwntogether by circumstance, Jenni and Katie become a powerful zombie-killingpartnership, mowing down zombies as they rescue Jenni’s stepson, Jason, from aninfected campground.
Theyfind sanctuary in a tiny, roughly fortified Texas town.  There Jenniand Katie find they are both attracted to Travis, leader of the survivors; andthe refugees must slaughter people they know, who have returned in zombieform.
Fast-pacedand exciting, filled with characters who grab your heart, The First Days: As the World Dies is the beginning of a frighteningtrilogy.
352pages (paperback)
Publishedon: July 5, 2011
Publishedby: Tor
Author’swebpage
Thanks to Tor for sending me a review copy of this book.
—–
Thereare a few things I couldn’t care less about, even if I tried hard: 1) Self helpbooks written by preachers who look like they might be pedophiles. 2) Anythingthat has to do with sewing or knitting or any of the “fiber arts”. 3) Zombies.Thus, you can probably see how I was surprised with myself when I accepted thebook The First Days by RhiannonFrater. The First Days was a book myhusband actually accepted on my behalf because, as he put it, “if you reviewbooks, you have to READ books that might not seem interesting to you at first.”I hate to admit it, but the man is right.
Istarted reading this book as soon as I got it in the mail. I figured that Icould plow through it and get some form of torture over with quickly. Whatsurprised me was the fact that I actually started to enjoy the book once I gotinto the swing of it. The First Daysis filled with enough action, adventure, personal and relationship elements toalmost make the zombie part of things a nice addition to the book, but not acentral part of it.
Theidea that humans are fighting zombies to stay alive is far from new, so Fraterhad to add other elements to The FirstDays to make it stand out from the multitude of other plots out there that,on the surface, seem to be exactly like this one. The First Days is highly character driven and what makes it standout above other books of the same ilk is the fact that the two mainprotagonists are female who kind of fall together after an interesting seriesof events. Jenni is an abused woman who watched her children be eaten alivewhile Katie is a lesbian lawyer who almost was eaten by her wife.
Frater’swriting is a bit wooden at the start. The world building sits second fiddle tothe characterization, which is understandable in a character-driven novel. Thatbeing said, Frater seems to iron out her style as the novel progresses. Herwriting becomes more fluid, and while I never felt that she fully crossed theline from “tell the reader” into “show the reader” territory, she did make agood try at it and often toed the line nicely. While I haven’t read the rest ofthe series yet, I do predict that her writing just gets better with eachsubsequent book. Despite the fact that the book does seem to suffer from somerepetitive situations and unrealistic dialogue, her style did improve immenselyfrom the start of The First Days tothe end of it.
However,a lot of the plot elements in The FirstDays were incredibly predictable. It is rather obvious from the outset thatthe two protagonists are going to turn into amazing strong-women on theirjourney through Texas. Furthermore, each character does seem to become aware oftheir one special trait which became almost overused throughout the novel.While the idea of “one special trait” is a good one, it’s not new and has beenused in plenty of fantasy and science fiction novels before this one. Somereaders might find the characters hard to become emotionally invested in due tothese elements.
WhereFrater shines is how she addresses the emotional impact a zombie outbreak wouldhave on those who are left to suffer through it. While I didn’t find everysituation believable, it doesn’t change the fact that The First Days is unique in the sense that it is very emotionallycompelling in some parts and thus, thought provoking. There are some romanticelements which may or may not be slightly nauseating and/or unbelievable,depending on the reader, but aside from that, the emotions Frater fills The First Days with are raw andpowerful.
The First Days reads like how I wouldimagine a television show to read. The writing is rather wooden and thecharacters and world do lack a depth that I really missed throughout the book.Furthermore, much of the action and dialogue is rather repetitive andunbelievable. However, despite all of this, TheFirst Days is a good action/adventure zombie thriller filled with plenty ofraw emotion and two female protagonists that many will find relatable. All in all, this isa “fun” novel rather than a horrifying one, but no less enjoyable for that.
3/5stars