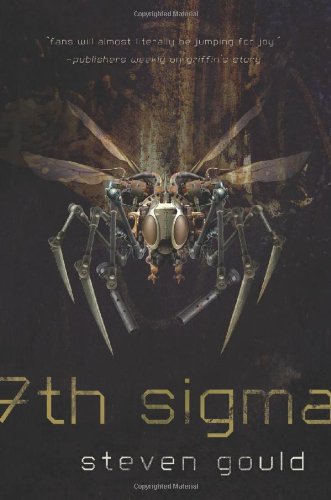 About the book
Welcometo the territory. Leave your metal behind, all of it. The bugs willeat it, and they’ll go right through you to get it…Don’t carry it, don’t wearit, and for god’s sake don’t come here if you’ve got a pacemaker.
Thebugs showed up about fifty years ago—self-replicating, solar-powered,metal-eating machines. No one knows where they came from. They don’tlike water, though, so they’ve stayed in the desert Southwest. Theterritory. People still live here, but they do it without metal. Logcabins, ceramics, what plastic they can get that will survive the sun andheat. Technology has adapted, and so have the people.
KimbleMonroe has chosen to live in the territory. He was born here, and heis extraordinarily well adapted to it. He’s one in a million. Maybeone in a billion.
In 7th Sigma, Gould builds an extraordinary SF novel ofsurvival and personal triumph against all the odds.
384pages (hardcover)
Publishedon: July 5, 2011
Publishedby: Tor
Author’swebpage
Thanks to Tor for sending me a copy of this book to review.
—–
Onething I really love about accepting review copies of books is that I end upreading stuff I never would have read otherwise. It really opens my eyes up tonew authors, or authors that I should have read and heard of long ago. One ofthese authors is Steven Gould, who, after further investigation, I discoveredis well known for a 1992 novel called Jumper.Well, I got 7th Sigma inthe mail and realized that it was about giant metal eating bugs and I knew Ihad to read it. Hey, in all honesty, who doesn’t want to read about giant metaleating bugs?
7th Sigma takes place in thesouthwest United States, which was mysteriously overran by metal-eating bugs.Most people have fled the territory, living in safe locations. However, someindividuals remain in the southwest. These people are mostly hard-as-nailssettlers who refuse to give up their land due to these bugs so they make duewith what they have. It’s an interesting view into a sort of dystopian wild,Wild West.
Despitethe almost depressing setting, Gould’s book is filled with likeable characters,like Ruth, an Aikido teacher and Kimble, an innovative teen who has managed tolive on his own in the bug infested territory for several years. These twocharacters are the best developed in the book, and will probably serve to hookthe reader into the story at first. Kimble is a fairly interesting characterwho may come off a bit too perfect at times, however, he’s easy to enjoyreading about.
Perhapsdue to the fact that one of the characters is a teenager, the book can be readas a transitional young adult/adult book. There is some language in it, andsome mistreatment, but other than that it reads like a young adult work morethan anything else. This can be good and bad. If you are a fan of young adult books,the youthful writing style probably won’t bother you. If you tend to haveissues with young adult books, this book might not work out for you so well.However, one fact remains. Gould wrote a transitional piece, which reallybroadens the potential reading base for 7thSigma as a whole.
Thebugs in 7th Sigma areinteresting and certainly eye catching, however, Gould seems to transition thebook from being about these metal-eating bugs, to being aspy/adventure/thriller piece about halfway through. While the bugs are thebasis for the reason why the southwest is the way it is, they don’t quite takethe stage like many readers would expect, or desire. Instead Gould seems to addthem to the plot more as important background scenery more than anything else. Furthermore,Gould never really answers any questions regarding the bugs (ie: Why are theythere? What is their purpose? Etc.). Some readers may find fault with how hehandles his creations, especially if they are the reason you decide to read thebook in the first place.
However,in the end, there was something about Gould’s writing style that has me feelinglike 7th Sigma left mewith a slightly sour taste in my mouth. Perhaps it’s the fact that the story istold in vignettes that affected me. Honestly, looking back on it, I’m not surewhat it is about the book that sets me off a bit. However, I never did feelfully engaged in the work as a whole. There seems to be a definite distancebetween the reader and the plot and characters. This is impacted greatly by thefact that some of the action seems to take place “elsewhere” and instead of“witnessing” it as a reader, you hear about it through a discussion betweencharacters, or something along those lines. Furthermore, as some reviewers havepointed out, the ending of 7th Sigma isn’t quite a cliffhanger, butit is left open ended. Gould could easily add to things at a later date, or hemight not. Either way, this may leave some readers feeling like the book isn’tfinished and the plot hasn’t been nicely tied up.
Regardless,it’s hard for me to say whether or not this book was a hit. On the one hand, Iam disappointed by how the author pushed some important subject matter to theback burner. As I discussed above, I never did feel fully engaged in this bookas a whole. However, on the other hand, 7thSigma isn’t really deep, or thought provoking and I don’t think it’ssupposed to be. It’s a fast paced ride through an interesting world. It’simmensely fun and entertaining. For readers who are looking for that kind of thing,I think 7th Sigma could bean amazing hit.
3/5stars