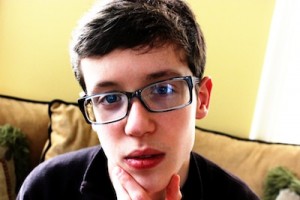 Daniel Goodman really deserves all the praise that this event has been receiving. When people were talking on Twitter about Elspeth Cooper’s post, it was Dan Goodman who kept saying that this was an important topic that didn’t get enough attention. It was Dan who thought up the name for this event. It was Dan who gave me nearly continuous support as I was organizing this event and thus, bolstered my courage. This allowed me to ask for posts from bloggers and authors that I’d otherwise admire far too much to actually talk to. Basically, this event happened because of Dan. Period.

Aside from that, if you are wondering who is going to be a major player in the future of speculative fiction, you really don’t need to look any further than Dan Goodman. He’s a young man, but unless you know that up front, you’d never guess. He is far beyond his years. Dan is truly a person I am going to be watching for years to come. I have a feeling that he is going to be an important name to know (as if he isn’t already…). As it stands now, Dan is one hell of a reviewer and thinker. He is already a trail blazer within the genre, snagging incredible interviews with authors I’d be way too intimidated to talk to. Furthermore, his reviews always impress me, and I quickly learned to respect his deep insights into books, genre issues and more.

Basically, if you don’t follow Daniel Goodman, you really need to. He’s a hell of a guy with an incredible head on his shoulders. I predict some amazing things in his future and I’ll be cheering him on as he becomes a speculative fiction powerhouse.

Daniel Goodman is a teenage automaton, powered by a complex algorithm that was written by a half-mad scientist trying to recapture his love, who died alone in a mountain made entirely of molten glass, powdered and covered by the hairs of a billion deceased elephant shrews…

No, but seriously, he wishes he could be one. This is just one of the ideas he has for a story, and he’s been cooking them up since birth. Progressive wordsmith, future internet radio host, aspiring author, and tinkerer of worlds, Daniel is actually a young guy who simply loves the art of storytelling and intellectual conversation. He grew up on a steady diet of books, comics, alternative and classic rock, and defunct space opera TV shows in Canada, and has been living there ever since, because he’s too cold to move anywhere else.

He writes over at the constantly restructuring and eccentric machine that is Literary Musings, where he infrequently blogs – a factor that Daniel accepts an aspect of being a senior student- about books (particularly speculative fiction), film, video games, and more. He believes that subscribing to a single story is a dangerous crime, and hopes that his words will speak volumes towards his attempts at intelligence and do a proper job of hiding the fact that he is years behind all of his fellow critics.

Read on, my friends, and prepare to be amazed.

To those who need a little history about me: when I was born – prematurely, I should add- I suffered from a lack of oxygen, which therefore affected specific areas of my brain. I was diagnosed (along with my twin brother) with spastic cerebral palsy, which affected my lower body in mobility, stamina, function, and flexibility, and caused it to be extremely painful/difficult to walk for long periods of time. I wasn’t like all the other little boys and girls; I could play sports, but only in limited ways. I was always picked last for schoolyard teams. I was the guy that everyone cared for, but many wondered about in the back of their minds. Staring was to me as common as cold weather in Canada.

As a result, I retreated into the comfort of more academic things; I fell in love with reading and writing. I (or we, for my brother was in a similar boat, likely more so) had a natural affinity for words, and we bonded with them like sodium does with chlorine to form table salt. To stretch the metaphor a little further, our early, regular exposure to books was like table salt itself: potentially difficult subjects coming together, to create something adequate for human consumption. All through my childhood, books were as necessary to me as food and water and I was able to establish what a lot of students my age lacked: reading can be, like the composition of table salt, made natural. You just need the right ingredients.

I was six years old when I first discovered fantasy in the pages of a storybook. It seems that as soon as I got my hands on it, nothing could stop me from reading it, or trying to, at least; my eyes drank in the lavish illustrations and glossed over the less interesting part that was the text. (Because truly, at that age, who cares for anything but the pictures?) I read the words I knew without stumbling, and my parents filled in the rest that I couldn’t figure out. My first brush with genre had a quality that, at that age, I just found wonderful.

It wasn’t the magnificent pieces of art that accompanied the text, or the world of wizened wizards, traveling dwarves, magical artifacts, and fire-breathing dragons that the author introduced me to. It wasn’t the different locations that I went to in the adventure, or all the trouble our protagonist got into along the way. All of this was thrilling and entertaining stuff for an infantile mind, mind-blowing in the sense that one first discovers the unreliable protagonist or realizes the training simulation is more than just a game. But there was something so irresistible asides from all of this then that I can only perceive now, something that my child mind couldn’t grasp beyond pretty swords and rocket ships.

It was the thought of a small hero overcoming big obstacles. I’d never thought before that a hero could have any imperfections, that he or she could be anything but perfect. It was the first time I was shown the hero could be common, could be doubted, and could be at a disadvantage with the rest of their society.

I saw something of myself in that book.

And even though I wouldn’t classify J.R.R. Tolkien’s way of portraying Bilbo Baggins as liberally exploring the topic of disability head on, this was my first encounter to anything fantastic where the characters could be anything less than flawless. He – and later, the hobbits of the Fellowship – were a revelation to me as a young reader because it made me reevaluate my understanding of what could pass as heroic, world-saving, mountain-wandering material. To my six-year-old perception, I could now be one of those kinds of people, regardless of the troubles that I faced.

I believe that disability in fantasy & science fiction done well is fantasy and science fiction that forces the character to recognize their own permanent vulnerabilities and apply their own skills in ways that powers the centrifuge of the plot, even if they are skills that are difficult to integrate into the storytelling vein. People with disabilities I know in real life figure out unorthodox ways to do things, and even if those ways seem strange and incomprehensible to an outsider, they just do them because that’s how it has always been done. These are the people that are the most inspiring in my own life; like Sarah, for instance, who had the courtesy to invite me to talk about this topic.

The heart of the matter is this:

If an author wants to write about special needs correctly, he/she has to recognize that their character has to be firmly grounded by randomness and reality in order for the unreality to make sense, because the reality of disability already should exist for that person in the cold void of what they can and cannot do. It is their reality of living; that fact has to be consistent with the fictional conceit and unreal narrative that the author is trying to tell. In the words of author Gregory Benford, effective speculative fiction writers of special needs “… aren’t merely writing a message piece about the disabled and the related issues, but are instead writing about an interesting character who just happens to be disabled.”

“In a hole in the ground there lived a hobbit. Not a nasty, dirty, wet hole, filled with the ends of worms and an oozy smell, nor yet a dry, bare, sandy hole with nothing in it to sit down on or to eat: it was a hobbit-hole, and that means comfort.”

Similarly, I think an effective understanding of how to handle disability in science fiction & fantasy requires connecting the dots between how the character finds solace in his/her own personal insecurities and flaws, and how the doubt expressed by the majority of others is a driving force behind that pursuit. It has to show them overcoming that judgment, surpassing insurmountable odds, carving out a place for themselves where they can be happy with who they are and live comfortably with the edges of their imperfections. Writing is how I have found comfort five surgeries later. With each phrase and curl of the word, I’m constructing my own personal Bag-End. It is how I’m becoming what I thought I could be back when I first picked up The Illustrated Hobbit when I was six years old: a hero in my own world, and hopefully, an inspiration in others.

So, for all those that have been there and back again, on roads less traveled, on quests finished and quests continuing, demons faced and battles fought, I say:

When you’re off to conquer your own personal Mount Doom, remember the little guys who got there first.

If you can’t tell, Daniel Goodman is well worth following. He can be found on Twitter and at his blogs Literary Musings and the podcast One Extra Life.

So, what are you waiting for? Go check out Daniel’s hangouts! You won’t be disappointed!