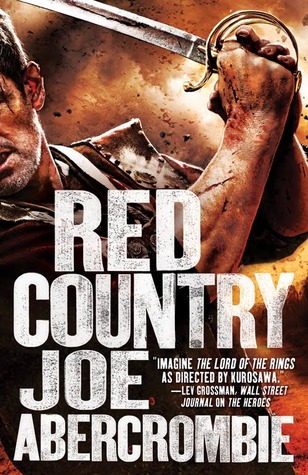 Shy South hoped to bury her bloody past and ride away smiling, but she’ll have to sharpen up some bad old ways to get her family back, and she’s not a woman to flinch from what needs doing. She sets off in pursuit with only a pair of oxen and her cowardly old step father Lamb for company. But it turns out Lamb’s buried a bloody past of his own. And out in the lawless Far Country the past never stays buried.

Their journey will take them across the barren plains to a frontier town gripped by gold fever, through feud, duel and massacre, high into the unmapped mountains to a reckoning with the Ghosts. Even worse, it will force them into alliance with Nicomo Cosca, infamous soldier of fortune, and his feckless lawyer Temple, two men no one should ever have to trust . . .

You can purchase a copy of this book by clicking on the following links: Red Country

I’m not a huge Joe Abercrombie fan. I don’t actively seek out his books, nor do I actively avoid them. I’m more of a middle-of-the-road fan. I like his stuff, but I like other stuff more, if that makes sense. I’m not exactly sure why this is. You see, when it gets down to it, Abercrobmie is one hell of an author. His books are well written and his characters are three dimensional and believable. There really isn’t much more to want out of a book. However, on the occasion I come across authors I react to like this. I appreciate their skill and talent. I enjoy reading their books when I do read them, but I just can’t reach the level of fandom that many people attain.

That being said, I enjoyed Red Country far more than I expected to. First of all, the setting is a little different than the previous Abercrombie books I’ve read. There is a definite Wild West feel to things that I truly enjoyed. The land and people in it are raw and untamed, many are settlers hoping for a better life or people passing through on their way to something greater. The area itself has the feel of a dustbowl more than anything else, speckled with large farms and ranches. It has a raw and untamed feel to it that was both unique and refreshing.

As with most other Abercrombie books, there are plenty of quips and sarcasm to keep you entertained as you read. Most of the characters have a brutal side, and have been obvious embittered by the lives they have lived. There are also plenty of secrets. While people who have read previous Abercrombie books might guess what these secrets are, or understand the various reveals and aspects of the plot than others, rest assured, Red Country is still a stand-alone. That extra depth that Abercrombie readers will gain when reading this book really isn’t enough to make a huge difference in enjoyment.

Red Country follows a few main perspectives, the main and most important characters seem to be Shy South and her sort-of father Lamb. There are also characters that the reader is introduced to in the army which vary in morality. That’s truly one of the strongest features of Abercrombie’s books: all of his characters are so different in personality, morality, viewpoints and etc that you can’t help but enjoy them for all their differences, even if some of them are despicable.

That being said, it’s also one of Abercrombie’s weaknesses. While there are plenty of quotable lines in Red Country, there are only so many quips that an author can throw at readers before they become exhausting. Furthermore, Abercrombie seems to be falling into a pitfall that I might be focusing on a bit too much because I’ve been rather annoyed with it recently. This pitfall is, specifically, the incredibly religious character who is also a raging psychopath. That trope seems far below Abercrombie’s level, and I was incredibly disappointed to find that stereotypical character in Red Country.

Red Country does have a fairly plodding start. In fact, the start seems to drag on forever. However, once the book really winds up, events happen at a very rapid pace and sweep you along with them. And, for those of you who enjoy Abercrombie’s fearless ability to describe and detail gore, he uses his abilities well in this book.

I’m getting to the point with Abercrombie’s books where I wonder how long he’ll be able to make them feel and seem new to readers. There are aspects of his novels that are starting to feel very “Abercrombie’s cookie-cutter.” Examples would be the sarcastic wit, which is incredibly entertaining and well done, but can get rather tiring after a while. Another example would be the use of the psychotic religious fanatic. Then there’s the strong female lead, which has been done before in his work. Shy holds many similar features with his other female lead. She’s secretive, mysterious and obviously jaded by life. She’s also incredibly tough and very admirable to have as a lead character, but like I mentioned – that’s been done before. As much as I might hate to publicly admit this, I’d like to see Abercrombie try for some new diversity, not just a Wild West setting kind of diversity, but I’d like to see if he’s capable of branching out his skills and really trying something new.

Despite a few characterization issues and a start that feels like it lasts forever, Red Country is a book that does Abercrombie proud. It’s gritty, gory, sarcastic, dark, and full of adventure, which are all the things Abercrombie fans tend to be looking for in his books. Furthermore, the new setting and the Wild West feel really breaths new life into his writing. Everything is new, even if the characters feel a bit old. Perhaps what is truly wonderful about this book is how Abercrombie seems to work on multiple levels. There’s the top level, which is fun and entertaining, but under that there are deeper themes playing, which many of his “quotable lines” hint at. While I worry that the series of books are going to eventually exhaust themselves, most of Abercrombie’s fans don’t seem to hold the same concern. No matter if you agree with me or not, you have to tip your hat at someone who can write books that seem to impress his devoted fans, and increase their number with each release.