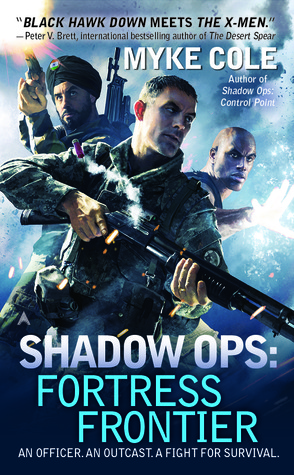 The Great Reawakening did not come quietly. Across the country and in every nation, people began to develop terrifying powers—summoning storms, raising the dead, and setting everything they touch ablaze. Overnight the rules changed…but not for everyone.

Colonel Alan Bookbinder is an army bureaucrat whose worst war wound is a paper-cut. But after he develops magical powers, he is torn from everything he knows and thrown onto the front-lines.

Drafted into the Supernatural Operations Corps in a new and dangerous world, Bookbinder finds himself in command of Forward Operating Base Frontier—cut off, surrounded by monsters, and on the brink of being overrun.

Now, he must find the will to lead the people of FOB Frontier out of hell, even if the one hope of salvation lies in teaming up with the man whose own magical powers put the base in such grave danger in the first place—Oscar Britton, public enemy number one.

Myke Cole made a huge splash in the SF waters with his debut novel Control Point. His numerous and devoted fans are anxiously awaiting the release of Fortress Frontier, the second book in his Shadow Ops series. The ARC was sent to my old address, and it was just by the attention of a friend who noticed the out-of-place package that I got my hands on it at all. It would have been a true crime if I had missed this book, as I can be numbered among one of Cole’s many fans.

Fortress Frontier follows the tale of a new protagonist. While many devout readers might be caught off guard with the switch in perspective, I found Colonel Alan Bookbinder to be much easier for me to relate to and understand. Bookbinder is a little older than Oscar was, and he’s a paper-pusher with high rank who has never really been in any battles. Oscar, on the other hand, is a battle seasoned soldier. For me, a person who has never (and will never) see battle or be a soldier, Oscar was harder for me to relate to. On the other hand, Bookbinder, though part of the military machine, is an office guy who fell in a situation he’d rather not be in. I get that. I can also relate to missing family, pushing papers, and dealing with people I’d rather not deal with. In this respect, Bookbinder, though not Oscar, might appeal to more readers.

To push this a little further than that, Bookbinder also shows Cole’s deep understanding of the military from the soldiers to the high-ranking paper pushers, like Bookbinder. Furthermore, the switch in perspective also shows Cole’s ability to realistically portray a myriad of different characters, in different ages and stations of life. And, never fear, we do see more of Oscar and other characters from Control Point, though Cole also introduces us to some more fresh faces. I should also admit that after Control Point I was a little afraid that Cole might only be able to write about battle-hardened soldiers rather than the “everyman” that Bookbinder seems to be. I was incredibly relieved that Cole seems to avoid any obvious typecasting.

Cole not only increases the cast of his series, but he also expands the world and the magic system quite a bit. Where Cole seemed to only hint at the vastness of his magic system and secondary world before, he really goes into detail in Fortress Frontier and spends much of the slower parts of the book subtly world building. Furthermore, the perspective of Bookbinder and the emotional connection readers will undoubtedly feel to him, will really help readers maintain a sense of wonder while Cole’s world expands. Experiencing the magic system for the first time (again) through the eyes of a new character with a very different perspective than Oscar’s also helps to keep things fresh while Cole adds more layers and depth to basically everything. Control Point set a great foundation. Fortress Frontier takes that foundation and runs with it. It’s fascinating to see just where Myke Cole takes everything he meticulously set up in Control Point.

One of my primary fears when I start any second book in a series is that the author will hit the slump that so many authors hit. To elaborate, it seems that many second books suffer from “placeholder” syndrome, where a lot happens but nothing really progresses. Fortress Frontier manages to miss “second book syndrome” by a mile. A lot happens, and the plot progresses, promising a truly amazing third book. Coles introduction of a new protagonist, more characters and his exploration of a sprawling world and adding more complexity to a magic system really keeps this book from hitting anything that could even remotely be considered a “slump.” The plot is breakneck, just as it was in the last book, and none of this adventure or action has a “placeholder” or a “bridging the gap between book one and book three” feel to it.

One of the most impressive features of Fortress Frontier is how obviously Cole has grown as an author. This is only his second book, but already he has advanced with his writing as much as many very seasoned SF authors out there. Cole shows an incredible ability to time his plot perfectly. He reveals things slowly, and does a wonderful job at keeping readers hanging on until the very end. Furthermore, his prose are beautifully polished, and his characters have a more realistic, three dimensional feel. This make them more relatable than they were in Control Point, to the point where readers very likely will feel the character’s emotions just as acutely as the character does, which is no small feat. Between Control Point and Fortress Frontier, Myke Cole changed from a new author into a force to be reckoned with and an author to watch closely.

That being said, much of this book deals with personal struggles, which result in individual transformations. While I truly enjoyed getting to know two important characters on a much more personal level, some readers might miss a clear antagonist that the book seems to be lacking. While Fortress Frontier still has heady battles and a lot of action, most of the action seems to take place on a quieter, more personal level where the true enemy is the individual himself, and the true battle is climbing out of the cookie-cutter they have been shoved into. That being said, the book seems to move a bit slower during these moments of personal transformation. While this might not bother some readers, it’s worth mentioning that the pace does slow down at times. These slower portions seem to be where Cole is working on a more subtle level building the world and adding depth to characters.

Fortress Frontier is quite incredible. Cole shows his wonderful maturity as an author. The book is plotted masterfully. The world and magic system have an added depth that readers might have missed in Control Point. Furthermore, Cole shows his ability to work on two levels: he’s both bold, and fascinatingly subtle when necessary. Bookbinder’s perspective might help some readers relate to the action and events more than they did in Control Point. All in all, Fortress Frontier is an incredible installment in a series that has truly won this middle-of-the-roader over. I can’t wait to see what Cole comes up with next.