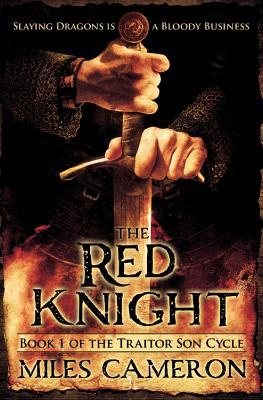 Twenty eight florins a month is a huge price to pay, for a man to stand between you and the Wild.

Twenty eight florins a month is nowhere near enough when a wyvern’s jaws snap shut on your helmet in the hot stink of battle, and the beast starts to rip the head from your shoulders. But if standing and fighting is hard, leading a company of men – or worse, a company of mercenaries – against the smart, deadly creatures of the Wild is even harder.

It takes all the advantages of birth, training, and the luck of the devil to do it.

The Red Knight has all three, he has youth on his side, and he’s determined to turn a profit. So when he hires his company out to protect an Abbess and her nunnery, it’s just another job. The abby is rich, the nuns are pretty and the monster preying on them is nothing he can’t deal with.

You can purchase a copy of this book by clicking the following links: The Red Knight (The Traitor Son Cycle)

The thing about military-esque epic fantasy is that it will always have an audience. Always. There will always be someone out there who sees a blurb about a knight on a horse and buys the book. It’s a sort of subgenre that will have fans no matter how redundant, or unique, the books may be. With that in mind, books that fit into that genre have a greater challenge ahead of them. They need to do something new, or present an old story in a refreshing way because there really are only so many different things that you can say about a guy on a horse going on a quest.

On the surface, The Red Knight is exactly what I look for in this kind of book. It’s unique. Set in an alternative earth/post-apocalyptic earth/secondary earth (I never was quite clear on that point), The Red Knight reads more like historical fantasy more than anything else. There is a religious order that will automatically call to mind the days of the old, powerful Catholics complete with nuns and monks. There is hokey, backward medicine that is practiced with a great deal of superstition. Camps and basic life procedures are absolutely disgusting when taken into consideration with this day and age, and probably right on par with how they were back in the medieval times. In fact, the life, culture, and cultural practices are incredibly believable and well fleshed out. They show the author’s surprising amount of in-depth research and obvious passion for the time period he’s portraying and the subject matter.

Cameron’s writing also helps him on his quest to bring this period of time to life in a realistic way. He’s blunt, straightforward and detailed so it’s hard to get confused with what he’s trying to say. He’s also lyrical and descriptive enough without being overly so. This all works together to create a very fascinating world with it’s own unique qualities nicely balanced with a rich historical feel that many fantasy fans will fall in love with.

Perhaps the book starts to fall apart a bit with pacing, especially some of the fight scenes. While I’m sure it’s hard for authors to write fight scenes that are constantly unique and memorable, that seems to be something that Cameron struggled with the most. Many of his fight scenes, especially toward the end, seemed almost interchangeable. This added to the occasional plot drag that readers would probably feel. The two working together could make readers impatient for the book to just move on in places, but it’s worth the wait as the ending is pretty rewarding and sets up the next book in the series nicely.

Characters themselves vary in believability. Cameron has women in his ranks of soldiers and he also shows how women are treated in the world around them. The two vary considerably and it’s an interesting window into sexism from days gone by and how people might have handled it, whether a soldier or a villager. That being said, while Cameron seems to excel on cultural nuances, he seems to struggle a bit with bringing characters into a well-rounded perspective. Some of the conversations are a little unbelievable, the Red Knight himself struggles with that, as much of what he says to other high-ranking individuals is done with such a flippant air I find him hard to engage in fully, or believe completely. Other characters fall flat, and lack color or memorability. With a cast that is as vast as the cast in The Red Knight, this is a serious failing that might break it for some readers. It’s unfortunate that, when I’ve finished reading, I can’t remember half of the people I’ve read about.

What it really boils down to is the fact that Cameron seemed to struggle a bit blending all of the elements together into one cohesive book that is more than just the sum of its pieces. Somehow, when the book was put together, some elements feel like they get far more attention than others. While The Red Knight is incredibly plot driven, the characters could have used a little more love. Though the world is fascinating and the culture is interesting, some of the plot points and action sequences suffer a bit which makes the background seem more interesting than the events the reader is meant to focus on. This left me feeling like The Red Knight is the same old man-on-a-quest-against-all-unexpected-odds, albeit jazzed up a bit, that I’ve already read before. That’s unfortunate, because Cameron really shows some amazing talent and deep thought in this book, it just doesn’t seem to seep through all the pages. The Red Knight is a valiant effort and sure to catch any epic fantasy fan’s eye, despite how unbalanced it may be. This might turn off some readers more than others. Regardless, it’s a solid foundation for a series that will leave many begging for more.