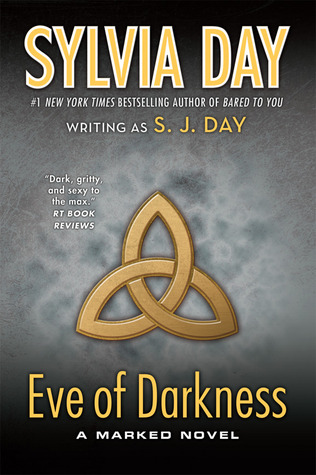 Years ago, Evangeline Hollis spent a blistering night with a darkly seductive man she can’t forget. But that evening of addictive pleasure has become a disaster of biblical proportions: She’s been branded with the Mark of Cain.

Thrust into a world where sinners are marked and drafted to kill demons, Eve’s former one-night stand, Cain, is now her mentor—and his equally sexy brother Abel is her new boss.

Cursed by God, hunted by demons, desired by Cain and Abel… All in a day’s work.

If you want a copy of this book, click on the following links: Eve of Darkness: A Marked Novel

Cancer treatment sucks. It really does. It’s as much of a physical exercise as a mental one. One thing that this treatment is doing is making it hard for me to think. My reaction time is nonexistent, so I can’t drive right now. But I also get lost in my own neighborhood because I can’t quite remember where I’m going, what I’m doing, where I should be, etc. It’s incredibly frustrating and very emotional. These issues also translate into my reading. For example, I can’t really follow intense, very epic and multi-faceted plots right now. I have a hard time not being overwhelmed by the sheer volume of it all. Epic fantasy is pretty much off my list until I get my head back. It’s just too hard for me to read. So what do I read when I am struggling with so much? Well, evidently I read the sort of stuff I’d never touch with a ten foot pole when I’m not like this: paranormal romance.

It fits the bill. There’s very little depth, not much to keep track of, nothing too intense or incredibly layered. It’s just a book, some characters, a plot that may or may not be compelling, and some sex. I can handle that right now.

Now, to say that I’m not well versed in this area of literature is the understatement of the year. However, sometimes you just have to throw all your cats in one bag and see what happens. Sylvia Day is a comfortable, and easy to read author. The writing is rather descriptive, which is incredibly helpful with the mythology-rich world she has created. It’s important for her not to only bring Southern California (an area most everyone is familiar with from movies, if nothing else) to life, but she has to make it feel fresh and interesting to the reader. It can’t feel like a place we’re all familiar with from the movies. It has to feel like somewhere I’d like to not just read about, but learn about. Day manages that nicely. Southern California isn’t just the place in the movies that I’ve seen (and visited) umpteen times in my life, but it is new and that’s quite an accomplishment for any author.

This trilogy is based on religious mythology, which is very been-there-done-that. Where Day takes a turn is Cain and Abel aren’t the source of all vampires (throw a rock and you can find that in the urban fantasy section of your local bookstore). Cain and Abel are, in fact, brothers who work as sort of bail bondsman for demons. The demons themselves are all quite unique and well thought out. The only sort of creature that has a rather stereotypical feel to it is werewolves. In this respect, I think Day didn’t aim high enough. In a book full of unique creations that are infused with vibrant imagination, werewolves just stick out like a sore thumb.

That being said, perhaps it is the mythology that I enjoyed most from Eve of Darkness. Despite the fact that the book is a little info-dump heavy, Day manages to portray a rich and complex reality that is, at times, a little too complex for the rather paint-by-numbers plot itself. However, it is interesting and unique despite all of that. The religious base doesn’t water it down or make it feel old and tired, like these things so often do. Day isn’t afraid to make a bold statement with her magic system, and she’s not scared to blaze her own trail when so many other authors in this genre create a fairly cookie-cutter magic systems.

Now, to the brass tax. While this book was called “urban fantasy” to me, it’s more of a paranormal romance than anything else. There’s an obvious love triangle and plenty of sexual tension. In fact, while this is something I usually think urban fantasy books focus on a bit too much, Day seemed to overdo it, even for what I expected. I dare say, the romance and sexual tension might be the whole reason you either love or hate this book, as the rest of the plot seems to take a back seat to Cain, Abel and Eve and their various emotional and sexual dilemmas. The characters are a bit two dimensional and cardboard, and the secondary characters are fairly nonexistent, but the more I read the book, the more I realized that it’s about relationships rather than actual people. This could be a hit or miss for many people who read this sort of thing.

You might notice that I haven’t mentioned anything about the logic of the plot or plot holes and what have you, like I normally do. The truth is, if I focused on whether or not things made any logical sense, I’d probably have hated this book. However, I didn’t read this for the logic or the incredibly deep plot. I read this because, right now, I just need to detach and enjoy a damn story. If you want to psychoanalyze a book, you might want to look elsewhere. However, if you want to enjoy a very estrogen charged story with some fairly creative mythology and some characters that are a bit admirable and frustrating, but easy to get behind, then you might want to look here. Eve of Darkness is predictable, a bit smutty, lacks depth, but can be a whole lot of fun, if you are in the mood for that kind of thing. Day’s writing and her quick moving plot keeps the pages turning quicker than you’d expect.

Onto book two, Eve of Destruction.