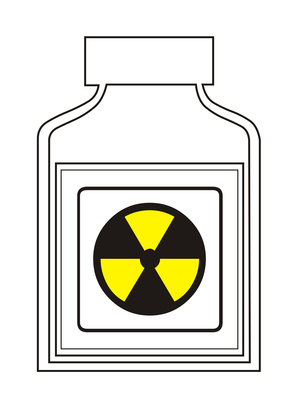 This upcoming week will be… interesting. I don’t really know what to expect.

On Tuesday I go to the cancer institute and drink a bunch of radioactive poison in the hopes it will kill off the part of my body that is cancerous. It’s been six very, VERY long weeks working up to this. Due to the fact that I will be radioactive, and could thus poison my family and anyone else I come into contact with, I basically have to be in a sort of quarantine for an unknown (up to 10 days, depending on the dose, which I won’t know until they run my blood work on Tuesday morning) amount of time so the RAI can get out of my system.

There are fun side effects, like an intense amount of boredom that comes from not being able to interact with anyone for days on end (I’m bringing a ton of ARCs to read and catch up on, the kind that I can throw away right after I read them so my various toxic levels of whatever won’t really matter). Loss of taste, swollen saliva glands, lack of saliva, sore throat, nausea, dizziness, general sickness, throwing up, sweating, fatigue, etc. I’m basically poisoning my body, so I expect that sort of thing. I don’t think it will be a walk in the park, but I don’t really care. I’m just ready to be DONE and feel alive again. All of these side effects are only temporary, and hopefully by the time they are gone, my cancer will be, too.

It’s actually quite fast acting. The longest part of this treatment is the absolute hell a person goes through during the six week process to get your body ready for it. On February 26th, I go back to the cancer institute and do a fully body scan to make sure that they “got it all.” So I drink the stuff on the 19th, and one week later I learn if, after two incredibly difficult, emotional, shitty and educational years with cancer, I am finally cancer free.

It’s been a LONG road to get to this point and I am so ready to be done.

This weekend I will be writing and scheduling up reviews to post next week. I’m not sure how many I will actually write. My goal is four, but who knows. I’m pretty sick right now so I’m having a hard time just getting daily stuff done, much less writing reviews. You can expect to see a few reviews posted through the week. I’d tell you what they are and when to expect them, but I don’t have a clue. I also have no idea if I’ll be online to tweet/facebook/update people here or not. Some doctors don’t let their patients touch technology while they go through this. Some do. I really won’t know anything until they do my blood work and let me know how high of a dose of this junk I need.

So that’s that. I plan on enjoying my weekend as much as I can. You may or may not actually interact with me before the 26th. If not, I’ll see you after the 26th. If my dose is fairly low, I’ll probably be online bugging people during next week because I will be B-O-R-E-D and I’ll be missing my kid and probably trying to distract myself from going insane. Regardless, keep checking here. I’ll have reviews up at various points during the week.

See you on the flip side.