The Queen is Dead – Kate Locke 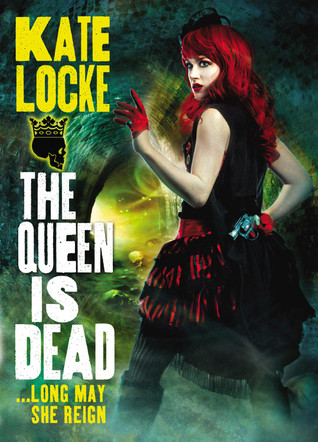 When her brother Val gets in over his head in an investigation of Half-Blood disappearances and goes missing himself, it’s up to Xandra, newly crowned Goblin Queen, to get him back and bring the atrocities to light. Xandra must frequent the seediest parts of London, while also coping with what she is, the political factions vying for her favor, and the all too-close scrutiny of Queen Victoria, who wants her head. Add this to a being a suspect in a murder investigation, a werewolf boyfriend with demands of his own, and a mother hell bent on destroying the monarchy, and Xandra barely knows which way is up. One thing she does know is that she’s already lost one sibling, she’s not about to lose another.
Xandra Varden is the newly crowned Goblin Queen of England. But her complicated life is by no means over.

There are the political factions vying for her favor, and the all too-close scrutiny of Queen Victoria, who for some reason wants her head. Not to mention her werewolf boyfriend with demands of his own, and a mother hell bent on destroying the monarchy. Now she’s the suspect in a murder investigation — and Xandra barely knows which way is up.

What she does know is that nothing lasts forever—and immortality isn’t all its cracked up to be.

If you’d like to purchase a copy of this book, click on the following link: The Queen Is Dead (The Immortal Empire)

The Queen is Dead is the second installment of the The Immortal Empire series. As such, you kind of know what to expect and it does, therefore, lose some of its surprise. In God Save the Queen, our protagonist, Xandra was established to be a tough-as-nails heroine who couldn’t seem to sit still for so much as a minute without finding some sort of chaos to get involved in. She’s always running from one disaster and into another, and that’s pretty much what you can expect from The Queen is Dead, as well. Xandra is still Xandra, despite her Goblin Queen status. She still somehow manages to accomplish more in an hour than I probably will in my entire life and chaos must be glued to her.

While much of the plot and characters will remain the same as you expect, based on developments from God Save the Queen, there is plenty of character development that will really please readers. For example, Xandra now knows more about who and just what she is and Locke isn’t shy about spending a good portion of the book exposing readers to Xandra’s inner turmoil regarding her new goblin status as well as the changes in her own personality that it brings along. For example, her temper is shorter, and her desire to consume flesh is all encompassing. It’s interesting to watch Xandra deal with these feelings while dealing with the (inevitably) chaotic world around her.

Secondly, the implications of Xandra’s new status are, largely, political and with a boyfriend who is a high ranking werewolf, the political implications are that much more important for their relationship as well as everyone else. Luckily, The Queen is Dead isn’t completely overrun by a boy-meets-girl story. They already met and they are already in a relationship. While it’s obvious that the relationship is rather strained, it’s nice that it can take a backseat to the plot itself. This allows readers to really enjoy Xandra’s story and her evolution over the course of events without being sidetracked by useless sexual tension.

Though much of The Queen is Dead is taken up by Xandra’s search for her missing brother; it is, perhaps, the most uninteresting part of the book. This is unfortunate, because it does make the book feel rather oddly balanced. Many of the side stories and the like are much more interesting than anything involving Xandra’s brother. In fact, that whole huge plot point had a very been-there-done-that feel to it. It’s not surprising, as you pretty much know how it’s going to end and the predictability involved really forces the book to lose some panache it could have used. Yet, you have to go through the motions so you can read and enjoy the other stuff that Locke does so well, like expanding on goblin culture, and the politics that readers weren’t really deeply exposed to in the first book.

Of course, there is plenty here that is stereotypical. While the world is interesting and the steampunk elements are nicely done, there is still the issue of Xandra, being the one woman who can somehow save the planet. Xandra, who seems to find herself everywhere all at once. Xandra, who is tough as nails and so sexy it hurts with her delicious boyfriend who also seems to make everyone drool. While I can expect these things from urban fantasy books, I always seem to mention them in reviews, probably because they are so cookie-cutter. In a world as unique as Locke’s, these cookie-cutter points really stick out.

That being said, The Queen is Dead is a fun, fast moving follow up to God Save the Queen. The characters are easy to sympathize with, and the series is, overall, turning into one of those fun series that somehow manages to be brain candy, despite (maybe “because of” would work better here) its stereotypical notes. Xandra is a character that is easy to love, and though I find the sheer volume of her accomplishments rather unbelievable. While many of the other plot points are fairly been-there-done-that, if you need a vacation from reality, this series might be a good place to start. Locke seems to brilliantly weave her unique vision with enough typical urban fantasy notes to allow this series to appeal to UF aficionados and those new to the genre, alike.