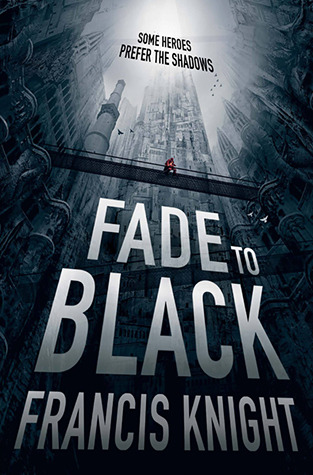 From the depths of a valley rises the city of Mahala.

It’s a city built upwards, not across—where streets are built upon streets, buildings upon buildings. A city that the Ministry rules from the sunlit summit, and where the forsaken lurk in the darkness of Under.

Rojan Dizon doesn’t mind staying in the shadows, because he’s got things to hide. Things like being a pain-mage, with the forbidden power to draw magic from pain. But he can’t hide for ever.

Because when Rojan stumbles upon the secrets lurking in the depths of the Pit, the fate of Mahala will depend on him using his magic. And unlucky for Rojan—this is going to hurt.

You can purchase a copy of this book by clicking on the following links: Fade to Black (A Rojan Dizon Novel)

I’ve been rather inundated with noir books from publishers and author’s recently. There’s nothing wrong with that, but usually the books I receive, while numerous, tend to span a variety of styles and sub-genres. It’s very rare that I receive so many similar books at once. I’m not sure if I’m just being pegged to review noir books, or if there is an abnormal amount of them being published right now. While I usually don’t mind this, it does mean that the noir author has to work doubly hard to impress me. After reading enough noir books back-to-back, I really watch for new and different more than I otherwise would.

In all reality, this overflowing of noir books works against publishers and authors, probably unfairly. The thing is, I’ve been reading so much noir recently that I feel like each book is incredibly similar. Yes, locations and names change, the characters are a bit different in each book, but the basic plot and the main character are all usually very alike. It’s unfortunate because I almost feel like I’m losing my zeal for the genre. I’m getting tired of reading about the jaded private investigator/detective/vigilante that seems to appear in every book, and I’m getting tired of their personal quest to (insert heroic thing here that they’d rather not be doing but inevitably have to do because they feel guilty here).

There’s a review Stefan Raets wrote called “Noir by the Numbers”. I still haven’t read it (I refuse to read reviews until after I write my own) but I saw the title on my Goodreads and it stuck with me. Why? Not only is it a clever title, but it’s also accurate. “Noir by the Numbers” – that’s what so many noir books feel like to me and sadly, Fade to Black isn’t exempt from that. You have everything a solid noir needs: a jaded protagonist who is down on his luck, a secret government agency/plot, a nice drama that leads the protagonist on a quest which, inevitably, uncovers things much larger than he expected. Mix all of this together, put it in a very unique city and you are good to go.

Rojan Dizon, the protagonist, basically fits every cookie-cutter mold you could throw at him. This is, probably, my biggest complaint. He’s the private detective guy who has a snarky quip for just about everything. He loves the ladies (and they love him… kind of. There is a scene that reminds me a bit of Pirates of the Caribbean at the beginning of the book). He is basically fearless, and has no issues really rushing head first into any situation (as long as it benefits him somehow). This is all fine, but I’ve read that before about a hundred times. Every noir character is built like that, and only the unique ones, the truly well done noir characters, step away from that mold and dare to be different. As it is, the basic bones of Rojan are the same as so many others. That’s incredibly disappointing and it makes Knight need to work twice as hard on a plot that is incredibly unique to make up for her stereotypical protagonist. Unfortunately, the plot isn’t that unique, either. Maybe I’m just jaded, but the whole family member has been kidnapped thing is a bit overdone. So right there Fade to Black gives you two big issues: a typical protagonist and a fairly uninteresting plot.

It might sound like I hated this book, but the truth is, I really didn’t. There’s some stuff that Knight did really well. For example, the city of Mahala is absolutely fascinating. It’s an incredibly unique place that almost becomes a character itself. It’s obvious that Knight put a lot of thought into Mahala, and all the issues a city that grows up instead of out would present the people that live there. Knight really goes into detail, bringing the culture and the unique challenges the citizens of Mahala face to vibrant life. Mahala and its culture really are worth reading the book for. Knight took a huge chance creating a city that unique and a culture that diverse, and it truly did pay off. Another area that Knight seems to excel at is with the magic system. While some of it was a little confusing to me (I’m blaming my cancer treatment brain for that, not the author), the pain magic that Rojan uses is an incredibly unique and very interesting type of magic that I’ve never read about before.

Perhaps that’s why I found the lack of creativity with Rojan and the plot so upsetting. Knight proves that she’s capable of incredibly unique, inventive fantasy with Mahala and her magic system(s). It just didn’t spread further than that. If the rest of the book had been as unique as the city and the magic, Fade to Black would be something amazing to behold. As it is, Knight shows a ton of potential and a fascinating ability to imagine and conjure her imaginings into life with some vivid prose, but she backs away from doing the same with her characters and plot, and that’s just unfortunate.

Sadly, a unique setting and a fascinating culture really isn’t enough to make Fade to Black stand on its own. While this is a solid book, with a fast moving plot and some great prose that bring Mahala and the events that transpire to life, Fade to Black just lacks the imaginative qualities I look for. The protagonist is incredibly stereotypical and the plot is also very predictable due to its own been-there-done-that qualities. That being said, I realize that not everything has to be new, fresh and inventive to be enjoyable. Fade to Black is a fun read that would scratch a noir fan’s itch – just don’t expect something genre shattering.