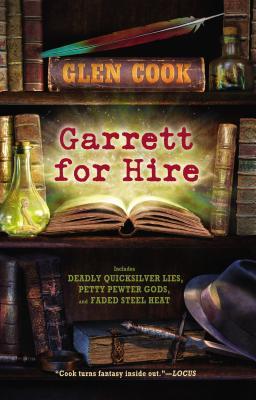 Meet Garrett, P.I. He’s a hardboiled human detective who stands out in a crowd of elves, trolls, and other otherworldly denizens in the magical city of TunFaire. Garrett For Hire is “fantasy noir at its best” (Library Journal), collecting three novels from Glen Cook’s classic urban fantasy series.

A rich woman hires Garrett to find her missing daughter…or to act as her hitman. In TunFaire, sometimes it’s hard to tell the difference, leaving him no choice but to sift through the sex, intrigue, and murder to uncover the truth behind this case…

With TunFaire real estate at a premium and prayer palaces at a minimum, the big gods on the block hold a contest: find the “key” to the one temple still available for worship. And when two rival pantheons try to hire Garrett to find it on their behalf, he finds himself facing the wrath of gods…

Riots between humans and non-humans have turned TunFaire into a war zone. And when a powerful gang of “human rightists” drag Garrett into the fray, he defends himself with a circle of friends no one would wish on their worst enemy…

You can purchase a copy of this book by clicking on the following links: Garrett For Hire

I have a process I go through when I get books to review. I read the publisher’s sheet on the book. Then I read the back of the book. Then I go to Goodreads and look up said book. I don’t read any reviews on the book. In fact, I don’t scroll lower than the basic information at the top of the page. I just go over there to see how popular the book is, and then I make a mental note on about when to review it based on all of that.

Garrett for Hire is an omnibus by Glen Cook. Being a book by the incredibly popular Cook, I was expecting to see a ton of reviews for this already. However, I was surprised to see that there really aren’t any. This got me wondering why. Today I decided it was time to do a bit of research. Garrett for Hire is actually comprised of three books in Cook’s popular Garrett Files series. These books are Deadly Quicksilver Lies, Pretty Pewter Gods and Faded Steel Heat. These are books seven, eight and nine in the series, respectively.

Now, I try to keep myself in the dark about books until after I read and review them so I should note that I honestly had no idea about this omnibus being part of an older series (Deadly Quicksilver Lies first published in 1994) until now. Neither did I know that this omnibus is firmly located somewhere in the middle of this series. However, it seems as though each book is fairly stand-alone. I never felt that I was missing out on any important details by joining the series at the halfway point. Nor did I feel like I could have used a bit more background to fully appreciate the characters, events or location. Therefore, don’t let the fact that this omnibus isn’t comprised of books one, two and three keep you from reading it.

Garrett for Hire reads like a noir novel with a little bit of a Terry Pratchett feel to it. The main character is a private investigator, which is nothing new to the noir sub-genre.  Deadly Quicksilver Lies also starts out fairly stereotypical as noir plots go, with Garrett taking on a case to look for someone’s missing daughter. However, this is Glen Cook, and Glen Cook doesn’t fool around. What looks like it might be stereotypical on the surface, quickly turns into something a bit more. While this omnibus never really loses it’s fun, fast and furious vibe, Cook doesn’t really write your typical noir fair.

One thing that really sticks out is the city of TunFaire, which really isn’t your typical pseudo-medieval bastion that seems to flood many fantasy novels. No, TunFaire is quickly established as something completely different. It’s a sprawling metropolis that is an incredibly vibrant cultural melting pot, and Cook spends plenty of time in Deadly Quicksilver Lies establishing just how new, unique and important TunFaire is. While he lays the groundwork in the first book, he grows upon it in Faded Pewter Gods and Faded Steel Heat.

Garrett for Hire is told in the first person. Usually first person narratives are sort of a turn off for me, but Cook makes it work. Garrett is an interesting person to live through. He’s got a wry, dark sense of humor that has a tendency to brighten up many of the situations he finds himself in so they don’t become oppressive for the reader. Accompanying Garrett is his Goddamned Parrot, which I loved (probably because that’s exactly how I think of all things avian, and the bird is just hilarious.), though he did steal the stage on occasion. This rather dark, sarcastic humor did a lot to keep the book moving and will work well to keep the reader enjoying the protagonist as much as they will inevitably enjoy the plot.

Petty Pewter Gods is a different sort of book than Deadly Quicksilver Lies. Petty Pewter Gods is a bit more serious, in some respects, and toys with some deeper themes. In some ways it reminded me a bit of Small Gods by Terry Pratchett. Garrett is still the snarky, sarcastic detective readers will learn to love in the first book, but here Cook deepens things a bit by exploring how belief is required for gods to exist. This installment of the omnibus was, perhaps, my least favorite. While the themes are interesting and I always enjoy when authors toy with more philosophical aspects of, well, almost anything, Garrett as a character doesn’t seem like he’s deep enough to handle the weighty themes that Cook is toying with. This gives Petty Pewter Gods an odd feel, sort of unbalanced in some ways.

In Faded Steel Heat Garrett has to infiltrate a racist militia, and in doing this he rubs shoulders with the city’s elite. While this book has the quick action and wry wit that fans of the series will be looking for, the plot seems fairly half-baked. Some readers will probably find the mystery to be fairly predictable and while the ending is satisfying, the details don’t completely make sense (I’d elaborate, but I don’t want to give anything away. Let’s just say there are some plot holes.). In Faded Steel Heat, Cook seems to use his incredibly diverse cast to his advantage, and this is what will really pull readers in. The Goddamned Parrot is nothing short of hilarious. Mixed with that, Garrett’s girlfriend is also a unique character to behold, and there are plenty of others that will stick with you. While the plot seemed rather unimpressive, the cast and crew were truly worth reading the book for.

Garrett for Hire is an interesting mix that really worked for me on some levels. Garrett is an incredibly entertaining noir protagonist to follow, but it seems like it’s the supporting characters that really make the book pop for me. The Goddamned Parrot, while stealing the spotlight on occasion, is a hilarious addition to the series. As are Garrett’s friends and associates, who are all truly and wonderfully weird in their own ways. Garrett’s adventures are really imaginative, quick moving and amazingly fun. While Cook keep levity and entertainment his primary concern with these books, he also toys with some deeper themes as well. While the levity and entertainment might overpower the deeper themes, they are there, and they are also fairly satisfying for readers who enjoy that kind of thing. However, one thing is obvious, Garrett for Hire is a book you want to read if you want to laugh a lot, and take a break from reality and all things serious.