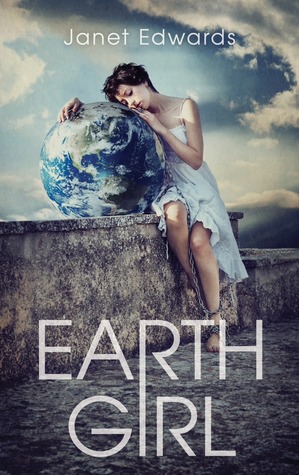 2788. Only the handicapped live on Earth. While everyone else portals between worlds, 18-year-old Jarra is among the one in a thousand people born with an immune system that cannot survive on other planets. Sent to Earth at birth to save her life, she has been abandoned by her parents. She can’t travel to other worlds, but she can watch their vids, and she knows all the jokes they make. She’s an ‘ape’, a ‘throwback’, but this is one ape girl who won’t give in.

Jarra invents a fake background for herself – as a normal child of Military parents – and joins a class of norms that is on Earth to excavate the ruins of the old cities. When an ancient skyscraper collapses, burying another research team, Jarra’s role in their rescue puts her in the spotlight. No hiding at back of class now. To make life more complicated, she finds herself falling in love with one of her classmates – a norm from another planet. Somehow, she has to keep the deception going.

A freak solar storm strikes the atmosphere, and the class is ordered to portal off-world for safety – no problem for a real child of military parents, but fatal for Jarra. The storm is so bad that the crews of the orbiting solar arrays have to escape to planet below: the first landing from space in 600 years. And one is on collision course with their shelter.

The publisher sent this book for my review.

You can purchase a copy of this book by clicking on the following links: Earth Girl

I’ve read a veritable ton of post apocalyptic young adult books. I’ve seen a lot of young adult books involving vampires and werewolves, angels or whatever other supernatural creature you can dream of. One thing I’ve never seen or read before is a young adult science fiction novel. There’s a first for everything, and Earth Girl was my first.

Earth Girl takes place in 2788 where only the handicapped live on Earth. Jarra, our protagonist, is stuck on Earth because her immune system couldn’t handle being on any other planet. Earth is a planet of dead ends. The people who live there only have a few career options open to them. No one really interacts with the people who are handicapped so there are plenty of stereotypes and misunderstandings going around. The handicapped are called “apes,” which is a hurtful term in the best of times. Jarra has quite a bit of anger regarding her situation, so she dreams up a fake past for herself and enters a university history course full of kids from other planets who are studying for a year on Earth. Thus the book begins.

One of the things that Edwards does really well in Earth Girl is address the issue of prejudice. Earth Girl is full of raw emotions that will charge up most readers. It’s easy to imagine yourself in Jarra’s shoes, hurt, upset with how she’s seen, and stuck in a situation she’d rather not be in through an accident of birth. Not only is it easy to feel the emotions that Edwards infuses her book with, but it’s easy to transpose those emotions and thoughts to our own world and time. Jarra has the benefit of being able to tell her story where many of the differently abled in our day and age don’t. Earth Girl serves a duel purpose of raising awareness to a topic that really doesn’t get enough attention.

The story itself is rather fun but very predictable. It follows a sort of paint-by-numbers course and really lacks any surprise or shock value. The romance is obvious as soon as the character becomes introduced to the plot. As things unwind, it’s pretty clear how the big dramatic ending will go. While predictability can get a bit old, the subject matter in Earth Girl is fresh enough to keep the predictability from being too upsetting or disheartening. In fact, it’s easy to overlook because there are so many interesting things to absorb.

Perhaps what disheartened me the most was the characterization, which was sadly lackluster and cookie-cutter. Jarra does everything right. She knows how to work all the machines and can make everyone laugh at her witty remarks. Despite the fact that she’s struggling with her own secrets and demons, she’s just not really that believable. While the author was probably trying to show just how capable a handicapped individual was, there’s a line between capability and unbelievable perfection and the author crossed it. Jarra isn’t just capable, she’s just about perfect and that really takes away from my ability to believe in her.

Furthermore, some things happen throughout the course of the book involving Jarra’s parents, a military ceremony, and a few incidents where Jarra (surprise!) saves the day that really rattled my enjoyment. Too much happens to Jarra in a short period of time. It’s too convenient, and then it’s way too convenient that she somehow rises to the surface in all these situations and becomes, at times, the delivering angel. This convenience, while it works well in the book, really affects the realism and believability in the plot.

Edwards builds a great foundation for Earth Girl. The story is fresh, the setting is unique, the issues dealt with are one of a kind, but somehow a predictable plot and some really unbelievable characters and situations overshadow all of this. Earth Girl is a fun read, and Edwards handles some sensitive issues with real poise, which sets this young adult read in a category all its own. While I might pick on some aspects of this book, it’s worth a read. Edwards is bold and inventive. Earth Girl brings fresh color to a genre that is going stale.