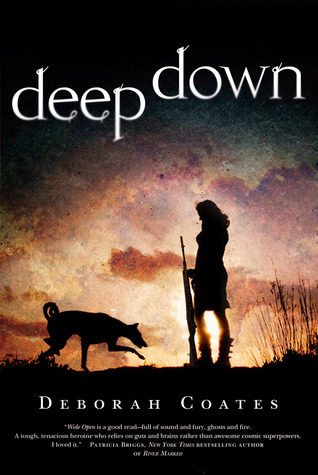 Death stalks the haunted, windswept prairie in this chilling sequel to Wide Open

Now that she’s solved her sister’s murder, Hallie Michaels has left the army and isn’t sure what to do next. Her relationship with deputy Boyd Davies is tentative, there’s still distance between her and her father, and she needs a job. The good news is, she hasn’t seen a ghost in weeks.

All that changes when she gets a call asking her to help an elderly neighbor who is being stalked by black dogs, creatures from the underworld that are harbingers of death. When a black dog appears, Hallie learns, a reaper is sure to follow. And if the dark visions she’s suddenly receiving are any indication, it looks like the reaper is now following her.

Meanwhile, strange events herald the arrival of ghosts from Boyd’s past, ghosts the young deputy isn’t ready to face. Refusing Hallie’s help, Boyd takes off to deal with the problem on his own, only to find that he’s facing something much larger and more frightening than he’d imagined.

Stalked by a reaper and plagued by dark visions, Hallie finds she must face her fears and travel into Death’s own realm to save those she most loves.

You can purchase a copy of this book by clicking on the following links: Deep Down

Deborah Coates attracted my attention with her breakthrough novel Wide Open. It is urban fantasy, but an entirely different animal than any other urban fantasy I’ve read. Coates set herself up as a master of atmosphere and I absolutely dug it. Then Deep Down, the second in the series, arrived at my doorstep and I started reading right away. It quickly became obvious that everything Coates showcased in Wide Open was perfected in Deep Down.

Coates has a very interesting writing style which I can only define as minimalist, and it’s incredibly effective. Her protagonist Hallie is a very self-contained individual, and that really permeates all aspects of Deep Down. Coates never over-explains or over-describes anything. In fact, she almost understates everything. While that does take a little time to get used to, it is also very effective with engaging the reader. Coates leaves a lot up to the imagination. It’s understood that Hallie’s town is small, she lives on a farm, and the landscape is flat. Coates never really goes into paragraph long descriptions detailing any of this. Instead, she infuses her book with incredible atmosphere, and it’s the atmosphere that seems to fill in the gaps that the author leaves. It’s actually a rather incredible and unique way to write, but it’s very effective.

Deep Down relies a bit on everything that Coates built up in Wide Open. The small town has already been established, as well as the magic system and Hallie’s unique abilities. While you could probably start with Deep Down and enjoy it on some levels, I think reading Wide Open first to get associated with Coates’ world and unique writing style would probably be wise.

This is probably where the biggest issue I had with the book lies. While I usually expect each book in a series to expand the world, characters, magic system and etc. a little more, Deep Down really doesn’t do that. The world has already been built, and it really has nothing shockingly new to offer the reader. While that might be fine for most readers, it was rather a disappointment to me. I’d have enjoyed to learn more of the nuances of Coates’ world, and they never really appeared. The plot was new, but the world lacked the evolution I’d have wanted to see.

That being said, I’m not exactly sure further evolution was necessary for the plot. While it would have been enjoyable, it might have been like adding a sprig of parsley to your dinner plate. It would have been a pretty adornment, but rather useless in the long run and I doubt it would have meshed well with Coates rather minimalist writing style. Furthermore, additional details probably would have messed up her ability to infuse the book with such an incredible atmosphere. The atmosphere is really where Deep Down thrives. Coates’ sparse writing style really makes the book feel as barren as the land on which Hallie lives. While that might sound like a bad thing, it’s actually not. It absolutely infuses the book with an eerie feel that is incredibly rare for me to find in literature. It allows the plot to really get under the readers skin, and makes the scary parts of the book truly frightening.

Hallie continues to be a unique character to follow. She has a sort of dark and dry sarcasm that could be easy for some readers to miss. Her unique abilities continue to evolve and her ability to take everything in stride says more about her character than anything else. That’s yet another aspect of Coates’ minimalistic writing that I enjoyed. She doesn’t tell the reader that Hallie is resilient. You just figure it out by how Hallie reacts to the situations she finds herself in. Hallie is rather confused in Deep Down, which was a very subtle but interesting dynamic that added some depth and unique emotional exploration to the novel itself.

There is a love interest in Deep Down, but it’s like everything else in the book: muted, understood and understated (which I truly appreciated). The relationship is rather interesting, tense, emotional and uncertain and because of that it felt incredibly mature and realistic. Coates never loses perspective of who her characters are. She keeps their relationship true to their personalities. This could frustrate some readers who want a no-holds-barred love interest, but it’s just not Hallie. She’s reserved and so is everything about her. Perhaps the only part of their relationship where I felt that Coates’ minimalist writing style was a disadvantage was in the dialogue, which could often come across as stilted and awkward.

That being said, Deep Down is well worth a read. Coates’ unique writing style deserves much praise and attention. She has managed to write a unique, mature and believable urban fantasy that could easily appeal to a wide audience. Hallie is a wonderful character to follow, despite the fact that she can seem a little withdrawn from the reader at times. I have to admit, the more I read from Coates, the more addicted to her writing I become. Deep Down is an incredibly effective subtle thrill ride. Give it a try. I bet it will surprise you.