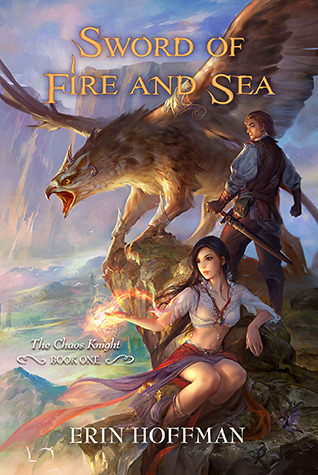 Three generations ago Captain Vidarian Rulorat’s great-grandfather gave up an imperial commission to commit social catastrophe by marrying a fire priestess. For love, he unwittingly doomed his family to generations of a rare genetic disease that follows families who cross elemental boundaries. Now Vidarian, the last surviving member of the Rulorat family, struggles to uphold his family legacy, and finds himself chained to a task as a result of the bride price his great-grandfather paid: the Breakwater Agreement, a seventy-year-old alliance between his family and the High Temple of Kara’zul, domain of the fire priestesses.

The priestess Endera has called upon Vidarian to fulfill his family’s obligation by transporting a young fire priestess named Ariadel to a water temple far to the south, through dangerous pirate-controlled territory. A journey perilous in the best of conditions is made more so by their pursuers: rogue telepathic magic-users called the Vkortha who will stop at nothing to recover Ariadel, who has witnessed their forbidden rites.

Together, Vidarian and Ariadel will navigate more than treacherous waters: Imperial intrigue, a world that has been slowly losing its magic for generations, secrets that the priestesshoods have kept for longer, the indifference of their elemental goddesses, gryphons—once thought mythical—now returning to the world, and their own labyrinthine family legacies. Vidarian finds himself at the intersection not only of the world’s most volatile elements, but of colliding universes, and the ancient and alien powers that lurk between them.

There are a few novels that I can’t figure out for one reason or another. Those novels tend to frustrate me. Do I like it or not? Sometimes I just can’t answer that question. Thankfully moments like that are rare but that doesn’t change how frustrating they are when they happen.

Sword of Fire and Sea starts out promising. The writing and descriptions are vivid, the prose is lyrical and flowing. Hoffman immediately sets up a vibrant secondary world, complete with unique magic and cultures which automatically put readers in the mind of epic fantasy. Hoffman’s style of writing might serve to enchant some readers. She truly does have a gift, and occasionally it’s wonderful to just sit back and enjoy her writing. However, there’s a honeymoon phase and once you are out of it, you might realize that there are problems that might not have been obvious at the start.

For example, while I enjoy lyrical, flowing and almost poetic prose, Hoffman occasionally goes over-the-top with her descriptions. They tend to dominate the plot so much it is distracting. While it is wonderful to be able to visualize characters, landscapes and the like, there’s a line that Hoffman crossed sporadically that gave the entire novel a slightly overcooked feel.

Another issue readers might face once they get out of the honeymoon phase is the sheer cardboard feel to the plot and characters. Sword of Fire and Sea is set up to be an epic fantasy in a secondary world. Much of the plot takes place on the go, which serves to introduce readers to numerous peoples and cultures and broaden their view of Hoffman’s world, as well. The problem is with the execution. There are plenty of epic fantasy travel based novels, like The Wheel of Time series, where much of what happens deals with movement from one location to another. Hoffman’s execution is off. This is helped by her over-the-top and sometimes clunky descriptions, but there are other issues as well. For a novel that deals so much with her broad world, it never feels fleshed out, vibrant or real. It feels like a pastel backdrop and I never was sure why I should care about it.

The cover of the novel reminds me a bit of a video game. There’s the woman wearing something that most women perched on a rocky outcrop would never wear, with the hunky guy standing behind her, and then the overpowering gryphon. There’s nothing really wrong with that, but it’s not realistic. It’s the sort of thing I see in my husband’s videogames where the hardcore women are just about naked while they fight (insert really bad thing here). It’s fun to watch, but that’s why he plays those games. They are fun, they aren’t really challenging or absorbing.

That’s how I think of Sword of Fire and Sea. There’s lots of pomp and circumstance, but when you really analyze the novel, the characters are very two dimensional, unbelievable, hard to sympathize with and rather corny with interpersonal relationships that tend to pop up with almost no buildup and had a tendency to make my eyes roll. There was so much potential for Hoffman to flesh out her world in the numerous adventures her characters face, but it never really gets past bare brushstrokes, despite her grandiose descriptions. I was left with an impression that this novel was very cardboard and cookie cutter.

I felt incredibly frustrated by this, because I’ve never really read a book before that showed so much promise with the prose, and just, for whatever reason, couldn’t deliver with world building or character development. I’m not sure what caused the great schism between development and execution, but it is there. The truly criminally unfortunate part of this is the fact that Hoffman put so much effort into Sword of Fire and Sea. There are the buds of brilliant ideas and visions here, they just needed a little more firm handling and more time to grow.

This is, perhaps, where my crisis comes in. On the surface, Sword of Fire and Sea is one hell of an epic fantasy novel with some powerful writing. However, once you get used to the writing and you really analyze the plot, it almost seems like Hoffman uses her writing to cover up the fact that there really isn’t much here. It’s agonizing to me, because I love seeing another female voice enter the epic fantasy fray. I also think Hoffman has the ability to write incredibly well. Even though I do pick on it for being a little over-the-top, given a firm editor, I think a lot of the slightly overcooked feel to her prose would have been gone. However, I have to balance that thought with the fact that everything I’m lauding is surface level, and under that there’s really nothing there.

In the end, I think Sword of Fire and Sea will have a rather divided audience. Readers will either love it for the style and art of it, or they will be a bit less enamored due to the fact that it’s a rather two-dimensional affair with a plot and characters to match. To sum it up, it is unbelievable, but beautiful.

I don’t have a clue where to put it.