A Matter of Blood – Sarah Pinborough 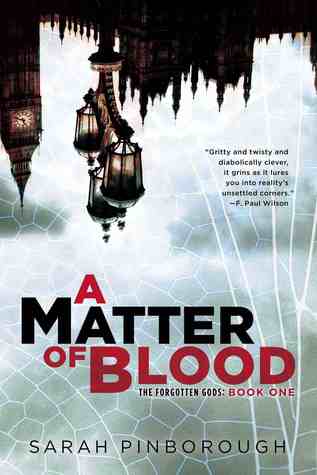 In a world steeped in darkness, a new breed of evil has fallen…

London’s ruined economy has pushed everyone to the breaking point, and even the police rely on bribes and deals with criminals to survive. Detective Inspector Cass Jones struggles to keep integrity in the police force, but now, two gory cases will test his mettle. A gang hit goes wrong, leaving two schoolboys dead, and a serial killer calling himself the Man of Flies leaves a message on his victims saying “nothing is sacred.”

Then Cass’ brother murders his own family before committing suicide. Cass doesn’t believe his gentle brother did it. Yet when evidence emerges suggesting someone killed all three of them, a prime suspect is found—Cass himself.

Common links emerge in all three cases, but while Cass is finding more questions than answers, the Man of Flies continues to kill…

, A Matter of Blood: The Forgotten Gods: Book One (THE FORGOTTEN GODS TRILOGY) – Kindle

When A Matter of Blood showed up at my door, my first reaction was an exaggerated eye roll and a muttered, “Wonderful, a vampire novel.” Then I read the back of it and I realized that this book has absolutely nothing to do with vampires (yay!). Instead, A Matter of Blood centers around a serial killer and the cop, Cass, who is trying to figure out who it is. While that may sound a bit like a standard thriller novel, it really isn’t. Pinborough wastes no time setting herself apart from the horror/thriller crowd.

On the surface, A Matter of Blood looks like a typical noir setup. There’s the somewhat downtrodden cop who is thrust in the middle of an intense situation that only he can find his way out of. However, it only takes about a page or two before the reader will realize that this really isn’t noir. The tone of the novel is a lot more serious, and the atmosphere is intense and shockingly dark. This is one of those books that seems to tread the line between horror and thriller perfect, never really falling into one category or the other. By doing this, has a wider appeal to people who might not favor fantasy as much as they enjoy non-fantasy thriller.

Cass is a rather refreshing character because he’s someone I could really relate to. He doesn’t work in black and whites, instead, his world is colored with shades of moral gray. He does the best he can with what he has, but he’s not above taking bribe money from his friend and crime boss. He works hard during the day, but when things get to be too much, he has his own vices he falls back on. In other words, he’s not some idealistic literary character who has fallen on hard times; he’s shockingly realistic and just as dark as the rest of the book.

All of the characters were unique in their own ways, though some of them felt a little more clumsily developed than others. While it’s not obvious who is setting up who and why until the end of the book, Pinborough makes it fairly obvious who the antagonists are by their somewhat over-the-top negative attitudes. That being said, the plot and writing style is so absorbing, that small detail is easily overlooked.

The plot moves forward at a steady clip. Pinborough has mastered the art of pacing. Each chapter is exactly as long as it needs to be, and they almost all end with leads to the next chapter. This is one of those books where saying, “I just need to read one more chapter” might end up keeping you up all night as there really aren’t any comfortable ending spots, and the tension ramps up nicely as the book progresses. Things get more complicated as Cass finds out more and with the leading endings to the chapters…. Just be prepared to lose sleep.

With a book this small, Pinborough covers a lot of ground. The economy is in shambles. London is far different than the London most of us know and love. While Pinborough does spend time building up the world and the history, most of her world building seems to be done through emotional tension and facts that are implied through Cass’s solving of the case(s) at hand. It is rather refreshing to read a novel this intense and detail oriented without having to spend chapters wading through detailed world history.

Perhaps the only true downfall with A Matter of Blood were some fairly typical plot elements that lacked a little creativity when coupled with Pinborough’s stunning writing style. For example, Cass is framed in a gruesome murder (which is said on the back of the book so I’m not blowing anything here). It adds a nice, important and personal dynamic to the plot, but this felt a little too paint-by-numbers for Pinborough. It’s something the reader can smell coming a mile away, and with a book this surprising and dark, being able to predict something that important in the plot was a let down. Furthermore, the introduction of gods and divinity and the various fantasy elements were fun, but they never really became as believable as the rest of the plot. Necessary to the story, yes, but they could have been less clumsily inserted.

That being said, A Matter of Blood blew me away. It’s a fast moving, gripping tale that is equal parts horror and thriller. The plot is tense and quick moving, if a bit clumsy at times. You should set aside some time to read this one, as it’s a novel that will keep you up far past your bedtime.