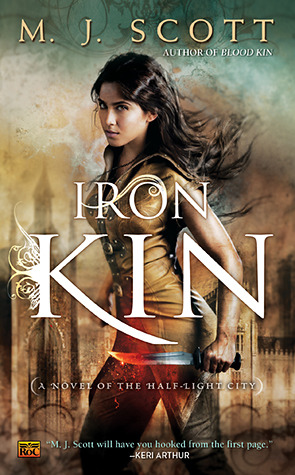 Imagine a city divided. Fae and human mages on one side, vampire Blood Lords and shape-shifting Beast Kind on the other. Between these supernatural forces stands a peace treaty that threatens to shatter at the slightest provocation….

I was raised to do the right thing. But to my family that means staying safe behind the walls of human society. To be a respectable metalmage and never put myself at risk. But the treaty is faltering. And if it fails, nothing is safe. To help save the city and everyone I care about, I will use whatever means I can to ensure the negotiations to renew the treaty are successful—even if that means forging an alliance with a man who is the very opposite of the right thing….

Fen is trouble. Wild. He would rather bind himself in iron and drink himself into oblivion than learn to master the visions that come to him. Those visions might just hold the key to peace, and it seems that my power might hold the key to his control—if I can keep it around him….

Iron Kin is the third book in a series I’ve never read before. While this would normally put me off, but each book in this series is more or less stand-alone, so it really wasn’t that hard to jump in on book three and pick up the world, characters and stories that had been built in previous installments. In truth, this series follows a pretty typical paranormal romance flow meaning each book follows a different couple as they meet, fall in love, and do whatever it is that they need to do.

Scott does a fairly good job at keeping readers up to date on what happened with secondary characters that were covered in previous books in the series. While some details at the start might confuse readers, it’s not that hard to catch up on what was covered and the basic world building. In that sense, Iron Kin is an incredibly easy book to start reading.

The world itself is fairly interesting, being a sort of secondary steampunk world which is divided between those who live in the daylight (humans, mages, etc) and those who prefer the night (beastkin, vampires, etc). While the steampunk elements are fairly low key, they are there, and they add a nice spice and diversity to an otherwise cookie-cutter plot.

The problem with Iron Kin is that it’s basically just like every other boy-meets-girl story out there that I’ve read with the unique world and politics being its one redeeming factor. Fen is a mongrel with a dark past and uncontrollable visions. Saskia is a high born woman who is way out of his league out to prove to the world how amazingly tough she is. They try to stay apart, but amidst all the political tensions that are falling upon them, they realize their desire for each other is overpowering.

Really, what else do I need to say?

Scott’s writing is rather superb, despite the paint-by-numbers storyline and characterization. That is, perhaps, the one thing that pulled me through Iron Kin. Under Scott’s deft ministrations, despite the rather flat story and the characters that can’t stand on their own, the world is actually rather interesting. Iron Kin is just like so many other books I’ve read, but there are some points where it is different, and those points are important. Scott isn’t afraid of politics, and while not all of the politics make complete sense, they are there and they are engrossing.

Despite my harping on this book, I read it in a day and I didn’t breeze through it that quickly because it was terrible. I breezed through it because Scott has some quality writing skills that she puts to good use with a story that is some delicious brain candy. While the romance is the standard thing, Scott keeps it from being too nauseatingly overpowering to the rest of the plot. Instead, it runs a nice parallel to the tensions happening in other aspects of the book. Honestly, brain candy has a place, too.

Fans of romance might find Saskia and Fen’s relationship lacks a little intensity and passion that they look for, and the ending has a distinctly sweet rather than romantic feel to it. There are some moments when the sexual tension and sex itself goes a little over-the-top, which are the times that will satisfy the romance reader’s itch. However, Scott seems more focused on the plot of Iron Kin rather than the romantic elements of it, and the balance the author struck between the two was a great bonus for someone who isn’t incredibly into romance.

Perhaps the points where I would have appreciated more elaboration was on the magic system, which was hinted at and explored a little bit, but never really had much depth. The steampunk elements of the world are also hinted at by various carriages that people use to ride around and things like that. If Scott had elaborated more on the steampunk aspects and perhaps detailed her magic system more, Iron Kin might serve to pull in more diverse readers.

Iron Kin really isn’t my typical cup of tea. I’m not that into romance, but I read it because it looked interesting. This isn’t your typical romance book. The politics, steampunk and interesting magic system attest to that. If Scott had more emphasis on those elements, Iron Kin, and the series itself, would probably appeal to a wider audience. As it is, Iron Kin is a fun, distracting fantasy novel that will appeal to romance readers, while probably not being the right flavor for many fantasy readers, like myself.