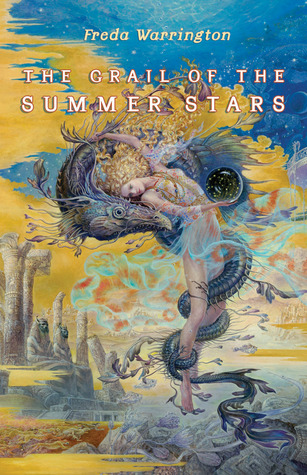 A painting, depicting haunting scenes of a ruined palace and a scarlet-haired goddess in front of a fiery city, arrives unheralded in an art gallery with a cryptic note saying, “The world needs to see this.” The painting begins to change the lives of the woman who is the gallery’s curator and that of an ancient man of the fey Aetherial folk who has mysteriously risen from the depths of the ocean. Neither human nor fairy knows how they are connected, but when the painting is stolen, both are compelled to discover the meaning behind the painting and the key it holds to their future.

In Grail of the Summer Stars, a haunting, powerful tale of two worlds and those caught between, Freda Warrington weaves an exciting story of suspense, adventure and danger that fulfills the promise of the Aetherial Tales as only she can.

You can purchase a copy of this book by clicking on the following links: Grail of the Summer Stars (Aetherial Tales)

Before I even need to review this book there is something I should say. If Freda Warrington didn’t write, it would be a crime against humanity. This woman was born to write and tell stories and she does it incredibly well. I fell in love with her work with the first book in the Aetherial Tales series, Elfland. That love has just grown with each installment in the series.

Now with that being said, you can pretty much guess that this review will be more of a gush than an actual critical piece.

One of the wonderful things about the Aetherial Tales series is that each book is roughly stand alone. While some of the characters will be revisited, they are usually secondary, or even more background than that. Elfland set up the world, but I don’t think it would be too hard for readers to pick up the second or third book in the series and appreciate it, though some of the world building nuances might be confusing in the later two books.

Grail of the Summer Stars is the last book in this series, which brings me no endless amount of sadness, as I absolutely love Warrington’s world. As with the other books in this series, Grail of the Summer Stars is a sort of hybrid fantasy/urban fantasy tale. While most of the book takes place in our world, there are occasions when the reader will visit the Spiral and see the otherworld that seems to parallel ours. There is also a bit of romance, and while it’s fairly predictable, Warrington has learned how to infuse a book with romance without it being the least bit nauseating or over-the-top.

Grail of the Summer Stars is a bit darker than the other two books in the series seem to be. The protagonist, Stevie, runs a museum and has a knack for art and history. She’s a rather fascinating, educated and mature character. This is coupled nicely by the fact that she really has no past and no memory of anything before she was fourteen. On the flip side is Mist, a fae who is obsessed with finding his brother and sister, all of whom have been haunting each other through the eons. There is a sort of twisted Game of Thrones/Romeo and Juliet thing going on in the family which adds some darkness to the book as well. Mist and his single-minded determination to find his brother before his brother finds him can cause him to be realistically blind to things happening around him, and also slightly frustrating.

While each of Warrington’s books are darker, more mature and much more “mellow” than most of the other “in your face” urban fantasy out there, this truly works in her favor. Her characters aren’t cute, funny and attention grabbing. They are memorable. They work their way under your skin until you feel like you aren’t just reading about them, but you are them. By the time the book is over, you will feel as though you’ve lost a fascinating world and an amazing friend. All of this is true with all of Warrington’s Aetherial Tales books, but she truly perfected it with Grail of the Summer Stars. While some of the plot and romance might be predictable, Warrington has perfected atmosphere and her characters fairly jump off the pages.

Grail of the Summer Stars is full of adventure, misdirection, and plenty of very detailed and twisted history. There’s romance, friendship, betrayal, growth, revelations and much more. Basically, it’s anything anyone could possibly want in a book. I can honestly say the only other urban fantasy book I’ve enjoyed this much for many of the same reasons is Of Blood and Honey by Stina Leicht. These two authors know how to write an incredible story full of emotional drama, depth and amazing world building.